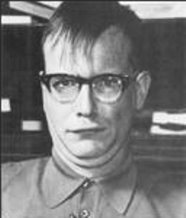 Doug Kenney was the heart and soul of the National Lampoon, co-founder with Henry Beard, the Editor-in-Chief of the glory days of 1970-72, the guy responsible for much of the glue that held the thing together--he wrote almost all of the Letters column and "Mrs. Agnew's Diary", which was the first place I turned every month. He'd later claim that he and NatLamp art director Michael Gross had invented nostalgia--much of his stuff resided in the suburban milieu of the American 50s and 60s, like "Nancy Reagan's Guide To Dating Dos and Don'ts", or "First Blowjob", wherein Connie Phillips discovers, too late, that her prom date is a psychopath ("Gee," exclaimed Jeff as he began to lash out viciously at her uprotected body, "I've been wanting to try this ever since I first heard Negro music!")

Kenney co-wrote what is probably the Lampoon's finest hour, the 1964 High School Yearbook parody (where he appears as the dead senior Howard Havermeyer to whom the book is dedicated), which was the basis of Animal House, which he co-wrote with Chris Miller (and appeared as Stork). He then co-wrote Caddyshack with Harold Ramis and Brian Doyle-Murray. There's a nice piece about Kenney and the film at ESPN Golf Digest.

Doug Kenney fell off a cliff in Kauai a month after Caddyshack opened.
Email ThisBlogThis!Share to TwitterShare to FacebookShare to Pinterest

he wrote almost all of the Letters column

Then he probably wrote one of my favorite letters of all time. It wasn't much longer than the only part I can remember clearly:

My boyfriend says you can get VD from licking a toilet seat.

Are they sure Doug fell? I remember reading about a comedy semenar he did at a university. The whole thing consisted of Doug standing on the desk demonstrating tap dance steps. I didn't know he wrote "First Blowjob". That story still makes me a little queazy. (As I recall, Dad slaps Connie around a bit after her date assaults her and kicks her out on the front lawn. Perhaps I was too young to get the joke.) One of my favorite Kenney stories is the four boys who decide to be best friends forever and never change. Wish I could remember the title.

What th' hell we s'pposed ta do, ya moron, indeed.

dadgummit, norb, you stole the quote right out of my mouth!

"ya moe-ron" to be precise.