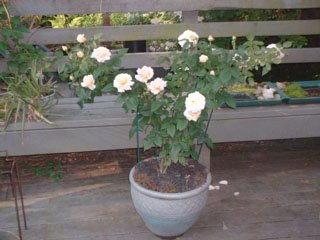 Grüss an Aachen rose ("Jerry") responding quite well to this spring's root pruning. 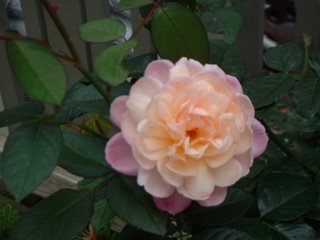 Close up of Jerry. 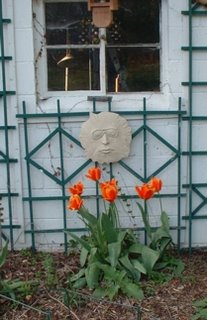 My wife had to use the digital camera last week, so I cleared it out and found these tulips reaching for the sun from March. They predate our purchase of the house. There's never been more than three blooms before. 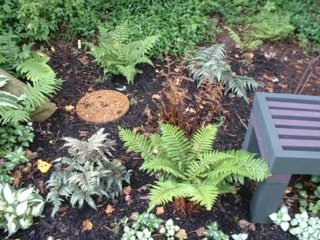 The fern family. Clockwise from the tassel fern at bottom center: Japanese painted fern, Lady fern, Southernwood fern, Japanese beech fern (all but invisible in front of yellow nametag), Lady in Red, another painted fern, and autumn fern just beginning to bloom. Leatherwood and Royal ferns just visible in back. The hosta in the lower left corner is Fire & Ice, one of my favorites. 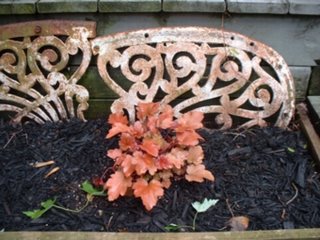 I have to splurge on something just hitting the market every year. Here's this year's, a heuchera called "Peach flambé". 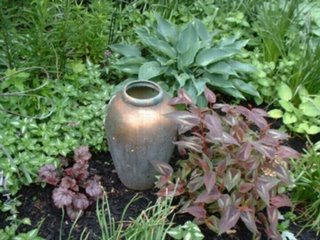 Japanese fleece flower, heuchera "Palace Purple", dead nettle, hosta "Blue arrow", a hosta I don't know the name of but call "Tie-dye" because it'll exhibit a half-dozen different tints once the weather gets hot, and a $5 garage sale pot my wife found.

Well, you gave the tulips their own sun! Of course they bloomed for you.

That thing with the chevrons? Some knotweed, surely?

I'm getting a kick out of the new heucheras and heuchera-tiarella hybrids that have been hitting the trade over the past three years. I've got 'Palace Purple', 'Plum Pudding', and I forget what other purples, a pair of what looks like your 'Peach Flambe', and a heucherella whose name I forget (and who needs rescuing from its exuberant neighbors) that's yellow with red along the palmate leaf centers. Somebody's having fun breeding those.

In Berkeley we have another name for hostas: snail chow.

I like the way the cluster around the coppery pot looks there.

Niiice. I've always liked hostas. Ferns are my favorites, though, mixed with mosses. It's a PNW thing, maybe. Yours are lovely.

Thank you for the pics. Brightens up an otherwise gloomy day.

My jealousy is showing. Usually I'm happy with my life, but occasionally I miss having a yard in which to putter, and roses over which to fuss. I suppose I should get my camera out and brag about the herbs growing on my deck. It just seems so pale an effort next to people with real yards.

Beautiful!! I am SOOO jealous! You obviously have enough cool and shade to grow ferns and hostas. My yard has full Georgia sun, so the tomatoes and portulacas and other sun-lovers do splendidly, but ferns and hostas would shrivel up and die.