At Least You Get To Choose Your Hell 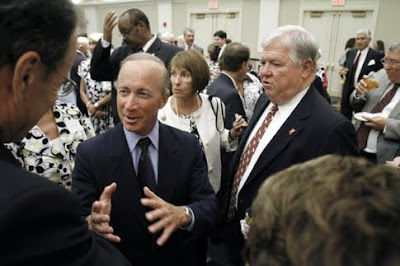 QUESTION: should I waste today's post on this idiocy, or should I throw away the virtual nickel I spent on it at the Times, and another chance to slag Mitch Daniels (they only come 'round once an hour or so, but that's twice the rate of Indianapolis mass transit) ? Let's start slowly and see how it goes.

Douthat's "case for" Hell--I won't spare you reading the piece to look for it, because I know no one other than a court-ordered psychiatrist would bother--is, essentially, that The Afterlife Which Doesn't Test Well With The 18-55 Demographic is nonetheless necessary to keep the popular stuff--An Alabaster Eternity, guardian angels, instant harp virtuosity, Jesus-shaped corn chips, your own Eternal Jessica Alba--from running away with things. Hell is, in other words, a sort of combination of Pascal's Wager and the common-sense rules of Marketing which undergird Planned Obsolescence and Faux Exclusivity.

So, in other words, if Hell didn't exist it would be hell on Christian apologetics. And tougher to keep people in line.

The Gospel according to Leo Strauss has actually been with us for millennia, and seems to be enjoying a recent resurgence alongside the Republican party's decision that it would prefer its support from the middle class to come from somewhere lower.

Which brings us to Mitch Daniels:

Daniels has looked to others to seize the issue of the country’s fiscal problems, hoping that would give him a good reason not to run.

Yeah, he's a veritable Diogenes of the Prairie. Really tough finding a Republican willing to blather about financial issues.

Daniels’s retail candidate skills — honed by nights spent in the homes of strangers and encounters with voters in coffee shops, fairs and flea markets along the back roads of his state — could play well in Iowa and New Hampshire. But his capacity to generate real enthusiasm across the party remains in question.

Is there someone out there who really believes this shit? Look, Dan, no one in Indiana thinks Mitch Daniels is Jes' Folks. Or no more than you do. The man went to high school here, to Princeton and Georgetown, then to work for Dick Lugar. He came back to Indiana for ten years, first to sit atop the Hudson Institute, then as Vice President in charge of North American Influence Peddling for Eli Lilly, before becoming Bush Jr.'s Director of Budget Mismanagement and War Cost Misestimation.

Mitch Daniels didn't put on a seed cap, a neatly-pressed plaid shirt, and climb aboard an RV to tour Hoosierland because that's who he is. He did so because the sorts of people who run campaigns felt he needed to play Cornpone to combat his image as a surly Washington elitist who'd wrecked the national economy. It may very well be that your low opinion of Hoosiers is entire justified, but none of us really believes that's why he won an election, and few of us with any knowledge of the deal and no paycheck on the line really believe he did it well. Take a look. Daniels surrounded by prop hicks eating balls of grease on a bun looks about as natural, as believable, and as comfortable as Tony Hayward being filmed cleaning oil off a duck. He won in a Republican state in a Republican year, and he did so because people figured twelve years of Democratic governors was enough. He won reelection against a woman who was later determined to be clinically dead. This made him a hero to Republican party insiders who'd just seen their criminal enterprise crushed and the remains inherited by Sarah Palin. The "miracle" of Daniels economic record--if it isn't to be judged by what actually has happened in Indiana--ought at least to be viewed in that light.

Daniels said he was “deeply disappointed” by Obama’s recent budget speech. “At a time when we should seek to unify Americans around the big changes necessary to deal with this life-and-death issue, he was divisive and partisan,” he said. “In terms of content, it was worse than empty.”

See, this is the Daniels you're really gonna see on the campaign trail, if any; the one who's yet to win an argument that has two sides.

Daniels’s focus will prompt questions about his service as budget director during the first 2 1 / 2 years of Bush’s presidency, as the country was beginning to move from surpluses to sizable deficits and a big increase in the national debt.

Daniels argues that the problem has ballooned dramatically under Obama, that debt and deficits today represent a far bigger share of the overall economy than in the Bush years. “We’d give anything to be within a country mile of that now,” he said.

Of the surplus you inherited, sure. Of the $2 trillion slide you orchestrated, once you got it, well, we're soaking in it.

Democrats see his record in less glowing terms. State Rep. B. Patrick Bauer, the Democratic leader of the House, called Daniels’s approach to budgets “slash and burn.” Dan Parker, the chairman of the Indiana Democratic Party, said Daniels’s record earlier in his term on taxes — a sales tax increase that was part of a broader plan that lowered property taxes and a cigarette tax increase to fund health care for low-income families — could draw criticism from conservatives.

One questionable decision was his attempt to privatize parts of the state welfare system. Indiana turned over the processing of eligibility claims to private contractors, including IBM. After widespread complaints, Daniels and other state officials decided to terminate the contract and have instituted a hybrid system.

And look, it would be nice if at some point someone--Democrat, or sane person--gets to point out that Daniels hasn't balanced Indiana's budget, which is $2 billion in the hole to the Feds, and only $2 billion thanks to the $1.67 billion in Federal stimulus money which "balanced" the books in 2009 and 2010. The same stimulus Mitch Daniels has been criticizing. While asking for more.

Yes, let's return to a country-mile's distance from 2001. And for god's sakes let's keep the goddam economy out of the hands of Mitch Daniels; it ain't like we don't know better by now.

Daniels surrounded by prop hicks eating balls of grease on a bun looks about as natural, as believable, and as comfortable as Tony Hayward being filmed cleaning oil off a duck.

Your writing rocks. I liked the public transportation reference. Wondering how Hoosiers will afford cars with our ever declining wages. And then how will we get to work? Question to ponder.