Let's Just Say It: Thirty Years Late Is Not "Current"

Thomas E. Mann and Norman Ornstein, "Let's just say it: The Republicans are the problem". April 27 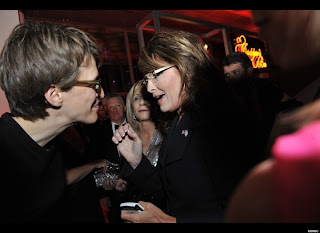 FIRST, via Pierce, do not click this link, unless you--unlike the author--find a picture of Rachel Maddow schmoozing Sarah Palin and Andrea Mitchell something other than a suitable replacement for the lost syrup of ipecac. 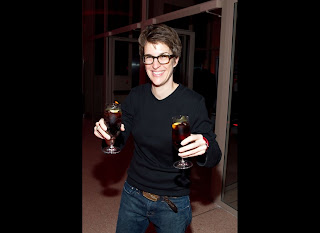 Sock it to the Man. Palin, meanwhile, was simultaneously drinking for free and endorsing Richard Mourdock in the Indiana Republican primary, despite the fact that what she knows about Indiana politics in general, Dick Lugar specifically, or anything and everything which can be described as an "issue" is what you can see from the Rat Islands.)


The GOP has become an insurgent outlier in American politics. It is ideologically extreme; scornful of compromise; unmoved by conventional understanding of facts, evidence and science; and dismissive of the legitimacy of its political opposition.

Pfui. Both of you have punditological careers dating to the Carter administration. Did you sleep through the Reagan presidency? Miss the rhetoric of the Nixon years? Tricky Dick didn't deliver the famous "Silent Centrist Majority" speech, y'know. Though he might've, since it's you guys who remained silent while the Republican party went from cabal of 19th century capital pirates to cabal of 19th century capital pirates cosseting Nixonian lunatics, to cabal of Nixonian lunatics who revere 19th century capital piracy in thirty years. Fer chrissakes, a guy trapped in Arctic ice in 1950, and thawed out last week, would have a tougher time recognizing the policies of the Catholic Church than he would the Republican party.


It is clear that the center of gravity in the Republican Party has shifted sharply to the right. Its once-legendary moderate and center-right legislators in the House and the Senate — think Bob Michel, Mickey Edwards, John Danforth, Chuck Hagel — are virtually extinct.

The GOP hasn't "moved from the mainstream". It's gained more power. The "center of power" hasn't gone much of anywhere. It may have followed Goldwater West and South, thanks to the evil genius of Nixon, but it's not exactly a seismic shift from Joe McCarthy to Jesse Helms, from John Wayne to Glenn Beck. When th' hell was it Chuck Hagel's party? When was it Nelson Rockefeller's, for that matter? They called Truman a commie, for chrissakes.


The post-McGovern Democratic Party, by contrast, while losing the bulk of its conservative Dixiecrat contingent in the decades after the civil rights revolution, has retained a more diverse base. Since the Clinton presidency, it has hewed to the center-left on issues from welfare reform to fiscal policy. While the Democrats may have moved from their 40-yard line to their 25, the Republicans have gone from their 40 to somewhere behind their goal post.

Question: is all of this designed to palliate the conscience of the American centrist, or is it really what it purports to be, the slowest recognition of the extent of a brick wall since the Mogols? Eisenhower had to name Richard Fucking Nixon as his running mate. The contemporary Republican party was born in 1964, not coincidentally the same year the Johnson administration decided that black people could have some rights. It's the party of Bill Buckley's racism, and of Pat Buchanan's, as well as Steve King's, of Carl McIntire's religious mania and Pat Robertson's, as well as Rick Santorum's. It's the party which wrapped every little adventurist foreign excursion from Korea to Iraq II in patriotic fervor, and which found it necessary to rewrite the history of every last one (excepting, maybe, the Glorious Liberation of Grenada); Nixon's traitor hunt of 1946 was little different than Andrew Sullivan's in 2001, and, no, he's one of yours. No one with eyes and ears could possibly have missed this, apart, somehow, from the DLC and today's tiny island leper colony of sadder-but-wiser centrists.


What happened? Of course, there were larger forces at work beyond the realignment of the South. They included the mobilization of social conservatives after the 1973 Roe v. Wade decision, the anti-tax movement launched in 1978 by California’s Proposition 13, the rise of conservative talk radio after a congressional pay raise in 1989, and the emergence of Fox News and right-wing blogs. But the real move to the bedrock right starts with two names: Newt Gingrich and Grover Norquist.

It's the virus causes the wart. Not vice-versa.

Okay, sure: the Republican party has become increasingly dilatory and obtuse in the halls of power, but that's not a change of the last four years. Had Republicans had the power in 1981 they would have dispensed with all the Reagan sainthood bullshit and just rammed through their radical agenda, instead of getting Democrats to agree to do it for them. And there's no question this has been facilitated, both by a venal and cowardly Democratic party, and a venal and cowardly Press. But, really, enough of this stuff. I'm not gonna make common cause with Democrats, or rueful Republican centrists, who suddenly notice what the GOP has become, and expect a medal for saying so. The time to speak up was thirty years ago, when this stuff was just as plain, and was being covered by a transparent rewrite of unpleasant history, and a clear retrenchment on individual rights. Y'know, when Reaganism was the Wave of the Future the Republican platform had no more chance of actually governing than it does today. David Stockman was just as big a liar as Paul Ryan. I'm going to settle for having been right about this shit all along, and hope we don't kill too many innocents when it all blows up. Don't offer to help me shovel now. You've already done enough.
Labels: Frog Boiling
Email ThisBlogThis!Share to TwitterShare to FacebookShare to Pinterest

...and a venal and cowardly Press.

Do you know who else got columns in W.O.T.D. runner-up Fred Hiatt's War Criminal Post yesterday?

Thanks as always. Saves me from having to get a blog and learn how to write. This Mann/Ornstein nugget struck me: Since the Clinton presidency, [the Democratic Party] has hewed to the center-left on issues from welfare reform to fiscal policy.

If the travesty of the cynically named Personal Responsibility and Work Opportunity Act of 1996 is "center-left," I can't imagine what center-right, or even far-right means.

Their "advice to the press" was also fun:
Also, stop lending legitimacy to Senate filibusters by treating a 60-vote hurdle as routine.

Here's the AP in the WAPO the next day or so: the “Buffett rule” vote [Democrats] forced in the Senate last week — which was defeated.
They don't even bother with the word "filibuster" any more.

Rachael. She's such a wonk.

OK, so she's not a whore. What's the right word?

Amen. (Corey Robin argues that it is more like 220 years too late. Worth checking out.)

I genuinely give a shit about the country. Big handicap in dealing with people who fundamentally do not. The Republicans who do have been removed from any meaningful power or influence; a very ominous development. GOP is still treated as one of the Great Political Parties steeped in august tradition, and will always be no matter how far it has crept to the fever swamps.

Liberalism/Democratic Party/"the Left" have been utterly ineffective at fighting these bastards for 40 years at least. Whether the whoring for corporate cash of the (D)s or the useless silliness of the True Left over this time frame, its time to recognize that We Are Doing It Wrong. Let historians decide who is to blame, we have bigger fish to fry. One can only lose so many battles before the war is over, and I think we are close to that tipping point.

Where do we go from here? Not a rhetorical question, "the fierce urgency of now" comes to mind. Whew, sorry to go all verbose on y'all.

There is a structural problem, which is the simple fact that we have two political parties, one of em the GOP. You can see how much traction Ron Paul gets. Once there was Norman Thomas. More or less same deal. There are two parties. Then there's this horrible problem of an incompetent press which Doghouse, Driftglass, and others document. And opposed to the horrible problem of an incompetent press we have some 450 right wing radio "pundits" and Fox "News," all of which is there to reinforce the prejudices and illusions of probably 60% of the electorate--an evil of great perniciousness funded by the forces which also dominate the two political parties.

Personally, I think Lincoln's 2nd Inaugural Address is more true that we today care to imagine. Wiser men put the words in granite at the Lincolm Memorial. That's about the only place most people will ever see them, unfortunately.

In the meantime, bless you Doghouse, and keep it up.

OK, so she's not a whore. What's the right word?
I'm going with rogue.