• In 1997, Lt. Kelly Flynn, the first female B-52 pilot, was discharged from the Air Force for adultery. As you may imagine--or will, once you consider that this was during the Clinton administration--the story made all the papers. Not being a student of the Uniform Code of Military Justice I remember, at the time, being astonished to learn that adultery was a courts martial offense. Or rather that--since I read the fine print--it constitutes one under certain circumstances. And among those circumstances are a) the rank of the accused (the higher the rank, the more serious the offense); b) the military status or connection of the other party (Flynn had an affair with the civilian husband of a woman in Flynn's command); and c) the effect on the military (Flynn's fame made her affair news; the fact that it was news made it a more serious offense. To the Air Force).

So, look, I understand that coverage of the Petraeus Affair Affair is inevitable.  I suppose this means we have to see Peter King's big ugly trash-fish head open up and discharge words, and we must wonder anew how Diane Feinstein got to Washington. There's no reason to ask where news judgement has gone. But fer chrissakes: it's no mystery why the FBI was keeping a criminal investigation secret (it's called "the law"), and there's no real puzzlement over the motive for Petraeus' resignation (which, evidently, came only after he learned that the matter would become public): the man's a fucking four-star general. He may be retired, but the fact that he conforms to a military sense of justice should not come as a surprise. Especially to media types who spend so much time fellating all things military.

• Meanwhile, Brian Williams found it necessary to evoke the famous generals of WWII in order to place Petraeus in historical perspective. Is there some sort of Tom Bwokaw virus still active at NBC?  (And am I the only one who remembers Stormin' Norman Schwarzkopf ?) 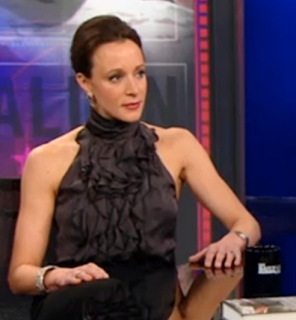 • One more thing: why is an affair a potential security risk, while having an Honorary Ambassador and Socialite to CENTCOM, who wears pearls bigger than her head, is no big deal?

• Thanks again to local Channel 8 News for bringing us, in the same week, a) the story of the Navy veteran who was flying the flag in front of his house upside down (which, he explained to the camera, he would have been doing "no matter who won the election", thereby proving that he wouldn't), and b) the Jim Shella report on the big Indiana secession petition at whitehouse.gov story, the latter despite the fact that most of the names on the petition that Shella checked weren't people from Indiana.

Fer fuck's sake, if these are stories then cover them as stories, if anyone remembers how that's done. If you're gonna stick a microphone in the first yahoo's face, ask him why he flies the flag if he doesn't respect its rules of etiquette. Ask him how he would have felt if Our Nation's First Responders had been involved in a high-speed crash rushing to his "emergency".  (By the way, when this routine appeared after the 2008 elections, I spotted one at the office of a local cemetery and called to complain. My mistake. I should have called 911.)

And if Shella wants to laugh off extremist crazies, maybe he could have followed the nigger in the white house meme instead.


That’s a neat fusion of conservative impulses: realism about human nature, skepticism toward naïve laws, attention to cultural consequences. You can see, in these reflections, how the GOP gradually reconciles itself to same-sex marriage.


Okay, forget the notion of the Republican party once again "reconciling" itself to social change, sometime after being crushed by the falling wall it was on the wrong side of and trying, until the last minute, to prop up. Which will, once again, be achieved by having Frank Luntz cleverly alter its rhetoric. This, after all, has "worked" so well in the past. I'd just like to know where, besides "inside the minds of moderate Republicans", "conservatism" has demonstrated a realism about human nature, or a skepticism about the efficacy of law, which is anything more than an extension of its temporal political interests? I've been listening to this shit for at least forty years, and I'd like to know when it goes into effect. "Conservative" realism about human nature consists of the heartfelt belief that all lower classes are greedy pickpockets with the sexual mores of feral cats, and its estimation of the naiveté of legislation depends on whether the law in question provides basic healthcare or forces a woman to hear that a fetus "can feel pain" before she can obtain an abortion. "Conservatives" supposedly start off with a metaphysical certainty about the imperfectability of Man (the one philosophical question the natural sciences have conclusively answered, while no one was looking, apparently). This translates into an unshakable conviction that nothing we can do will ever improve the lot of the Poor, but also, somehow, into the argument that we needn't bother making sure the wealthy don't steal anything that's not nailed down and surrounded by lawyers.

How is it that this is still being repeated? And forgive me for repeating myself, but that's not a philosophical position. It's a symptom.


Labels: English. It Makes A Poor Cudgel.
Email ThisBlogThis!Share to TwitterShare to FacebookShare to Pinterest

"Okay, forget the notion of the Republican party once again "reconciling" itself to social change, sometime after being crushed by the falling wall it was on the wrong side of and trying, until the last minute, to prop up"

... the big Indiana secession petition at whitehouse.gov story, the latter despite the fact that most of the names on the petition that Shella checked weren't people from Indiana ...

You know what Indiana is like Doghouse. You can't blame us for trying ;-)

"I suppose this means we have to see Peter King's big ugly trash-fish head open up and discharge words": such an image is enough to terrify Jason Voorhees.

the "Honorary Ambassador and Socialite to CENTCOM, who wears pearls bigger than her head" apparently has an identical twin sister, which probably makes her (and her) irrestible to military brass !