• It has recently come to the attention of the alabaster town fathers of Carmel, Indiana, Indianapolis’ “Bicycle Friendly”, but snooty, neighbor to the north, that some people ride bicycles fast. In particular, they do so on the Monon Trail, the Rail-Trail project which, if memory serves, scads of angry Carmel property owners fought when it was first proposed, on the grounds that a) it would lead to undesirables crossing into Hamilton county without so much as a traffic stop, and b) the rather novel legal argument that government-granted railroad right-of-ways from the 19th century somehow reverted to people who bought nearby land eighty years later once the railroad wasn’t using them any more.

As these things tend to go, once the natural-born burghers realized that people using the trail sometimes dropped loose change, Carmel decided it loved the Monon. So much so that it chose to build its hulking, $45 million, Oh-no-taxpayers-won’t-pay-a-cent Elephant (appropriately White) of a Performing Arts Center right next to it.

Anyhow, they fell a little short of their goal of 100% private sponsorship to build and operate the thing, like by approximately all of it. And since, apparently, hosting a single Kansas show every July won’t cut it, they turn the parking lot into their Saturday Farmers’ Market.

Which means, if you’re a bicyclist who actually pedals energetically enough to make the bike move forward, the usual contingent of mazed pedestrians, stray dogs, and orphaned children is multiplied by about 50, and any remaining free space spackled over with elderly confusoids. I’ve ridden through it twice. I never will again.

But apparently someone with power was passed by a cyclist who didn’t doff his cap, or by chance appeared insolent, so there was introduced into the town council legislation which would create hefty fines for speeding, and which would ban cyclists from riding more than two abreast. It would also have shortened the permissible length of dog leashes to five/six feet, down from “100 feet of clothesline, give or take.” Scratch a libertarian, find an authoritarian. Hell, just growing your fingernails long is usually enough.

There was some objection to the size of the fine, and enough other concerns that the council handed the issue over to a judge, on the grounds that maybe someone who knew something about the law should look at it. And, as a result, Carmel now has two proposed ordinances on the floor.

And don’t get me wrong; there are plenty of asshole cyclists out there. But they are joined by people paying no attention to anything other than their cellphones, three-seater strollers strolling two or three abreast, and with the notion that a mother with children has the right of way in all cases, even that of absent-mindedly pushing the child directly into the path of a speeding vehicle. Half the people on that Trail at any one time seem to think they’re at a stupefyingly linear mall. (For that matter, in Hamilton county, half the people you meet look like they do not, or cannot, distinguish between “at the mall” and anywhere else.) Those people will suffer no legal consequence for their actions. They have not even had to suffer an 80-pound sign saying “Walk Attentively” to equal the one that says “Ride Slow” [sic] which has been placed two inches off the side of the trail now, in hopes some miscreant cyclist will slam into it. 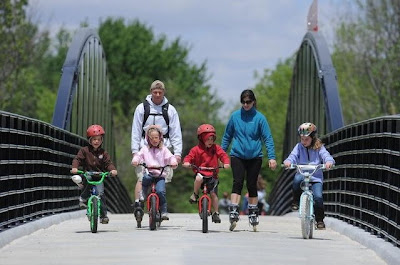 though I suspect they posed it; in real life there’d be two Bouviers des Flandres. Twenty-five feet away. Being held by one of the girls. 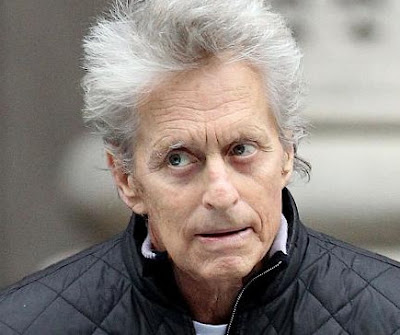 The good news is that we know ass-kissing doesn’t cause cancer, else there’d be fewer Americans now than in the 15th century. 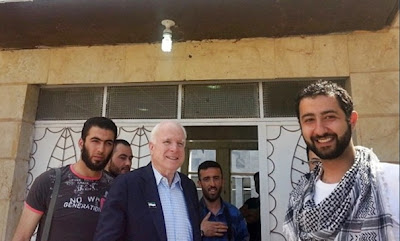 By the way, whatever happened to Republican complaints that in 2007 Candidate Hillary Clinton was treasonously conducting her own foreign policy by traveling to the Middle East?

Riley, what a funny post. I was kind of feeling depressed about $4.25 gas but at least I can laugh while I'm being GOUGED!

Damn, I hate the four abreast crowd. You're lucky you don't live in a tourist besotted area. Nobody is as clueless as a tourist on a =n afternoon stumble. I mean...six abreast, people?

Does it really say "Ride Slow"?

OK. So on every trail I've ridden on* proper trail etiquette is pedestrians yield to horses (I live in the wild west but I think they may have them even in the mild east) and bicycles yield to everybody.
Sorry about that. And note that yield does not necessarily mean stop.

As far as getting a speeding ticket on your bike, I'll see if I can find the MTBR thread talking about the California trail with the speed trap.

*Except on the competitive tracks. Their proper etiquette is "Slower yields to faster". You need some of those (and I am very lucky to have them).

Even worse are the folks with the two- and three-seater strollers for their only child. Apparently, the other seats are necessary for an array of supplies and rations that a Sherpa would envy.

The good news is that we know ass-kissing doesn’t cause cancer, else there’d be fewer Americans now than in the 15th century.

That's the funniest line I've read re this story.

I live where the speed trap is to be located. What disturbs me is that the trail was built as a bike trail, and the encroachment of others has made it such that bike riders are probably the least welcome now.

Sign on the stairs I climb every day: "Avoid Fall, Use Handrail". And last month's motivational slogan was "Celebrate Awesome". Who comes up with this crap?

My favorite sign at Lions Park in Zionsville is the one that says “Play At Your Own Risk.”