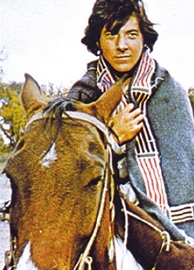 "Didn't you hear me say, 'God bless George Washington'? 'God bless my mother'? Now what kind of Indian would say a fool thing like that?"

"He healed us", no shit, was the comment some guy who identified himself as "sixty years old, so his presidency happened right in the middle of my life," made about Gerald R. Ford sometime last October, when the teevee wall-to-wall coverage of his untimely passing seemed to begin.

I've been busy. Too busy to really feel anything was lost as I periodically turned on cable news the past ten days and admired their willingness to stay with static shots of more-or-less nothing for hours. I'm not gonna jump up and down just because we were subjected to another needless demonstration that teevee news has nothing much to say and very little sense of when to say it. I don't really have anything nasty to say about Gerald R. Ford, Accidental President, though I could if I tried. The Nixon pardon was a long time ago. His family seemed nice. I'm sure he was kind to trick-or-treaters.

But if we owe the dead the sort of respect we routinely deny them in life, we don't owe anything to amateur hagiographers and semi-professional composers of teevee panegyric. It's not that I personally resent the implication that I was somehow assuaged by The Pardon, or that Jerry Ford's remarkable grace in office mended my tormented soul; I do resent it, but that's beside the point. How can someone say a darn fool thing like that? Who's supposed to believe it? Why is it that the same people so enamored of these public displays of meaninglessness are the same ones who aren't satisfied until we're actively lying about indisputable truths in the name of making them feel better? It's one thing to measure out your life with coffee spoons. It's quite another to use restaurant sugar packets (with apologies to Abe Simpson).