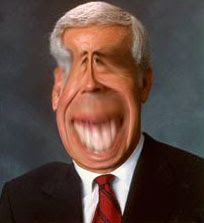 THERE'S good news from the kitchen remodeling front: The US still leads the world in the production of building materials you can't get the UPC codes off of without a belt sander.

I've had to put aside my summer reading: Geoffrey Perret's feisty Commander in Chief, and Francis Parkman's 19th century history of the French and Indian Wars, which is a damn fine yarn if you can ignore all the childlike savages and history as the inevitable march toward British superiority stuff. I had to turn off Amity Shlaes on Book Notes, just as she was explaining that nobody in the history of historical-looking books had ever cast a critical (but fair!) eye at the New Deal before. This is not to say I wouldn't have turned her off anyway. And none of this is to say I've gotten any actual work done.

I was forced to ponder, briefly, how long into a Giuliani administration it would be before the neoantifluoridationists began blaming Truman for Iraq. ("Nobody's ever looked at the Truman Doctrine critically before!")

Still, I had enough time to join millions of Hoosiers worldwide in celebrating our sinecured senior Senator's latest stirring from coma. It was vintage Lugar--I'm the only person left who still refers to him as "Nixon's Favorite Mayor"--delivering an unflavored homily as if he were doing an impression of Paul Harvey under sedation. And winding up getting 2.5 minutes of attention that refers to him as "a moderate Republican" and "a respected foreign-policy expert" while ignoring the fact that he's spent five decades moderately providing suppressing fire for what was, back when he started, the crackpot wing of his party. The News was so excited by the spectacle that no one bothered to listen to what the man was saying (and who can blame them?). Instead, he's introduced as "Top Republican Breaks With Iraq Policy", followed by fifteen seconds of a vague droning sound, followed by a reply by Tony Snow (what a prescient choice for Press Secretary--not prescient, exactly, since they knew he'd have to lie every minute of the waking day, but still--the man's been doing it for his entire "professional" life. And he thrives on it, assuming the cancer isn't his Digestive Tract's Own Rebellion. Even Ari Fleischer was ground down by this stuff, but Snow pops back up every sunrise with a four-year-old's sense of rebirth and wonder).

It's odd, too, because no one evinces more disinterest in the niceties of diplomatic maneuvering than the American Press, but here was Nixon's Favorite Mayor (hey, it's a lonely job) pulling a Republican PR stunt (okay, a boooring Republican PR stunt) and they just can't get enough of it for a hundred and twenty seconds. It's treated as though Lugar said something substantial which had come to him after long consideration of The Surge. But Tony Snow was right (which must seem like the discovery of a new intellectual continent to him). Lugar beige-ly warned the nation of the dangers of Iraq entanglement in 2002. Just hours before he voted for it.

Somehow nobody asks "Why is it a moderate Republican, a respected foreign-policy expert, takes five years to recognize and moderately object to an utter fucking Republican foreign policy disaster?" Dick Lugar had the opportunity to be the William Morse of his day and party, or at least its Bill Fulbright; his Hoosier seat would have stayed warm, or at least body temp. Instead he goes on providing cover for dingbats at risk of getting mussed in the next election.

And nobody asks him, "Where were you when we had resources to worry about?"

I guess you meant Wayne Morse, not William.

Didn't Lugar say we needed a bipartisan solution to Iraq? Funny, where was all the need for bipartisanship before the war?

Oh, that's right, it was there as most Dems rolled over and took it in the, well, the....

Sorry for the mini-rant, one frustrated Liberal here.

Now, Terry, you must understand that the SOLUTION to the big huge Republican mess needs to be bipartisan! Dems and Repubs, hand in hand, working together.... Beautiful.

Lugar truly is beige and catatonic and ridiculously useless. And I especially love the description of Tony Snow, who "pops back up every sunrise with a four-year-old's sense of rebirth and wonder." Yep, that's how it was when I was four--every morning, the prior day's tears, tragedies, lies, evasions, and (in my case--not Tony's) punishments totally forgotten.

...she was explaining that nobody in the history of historical-looking books had ever cast a critical (but fair!) eye at the New Deal before.

Which is interesting, considering this little list on her very own web site:

And isn't it great when "fair" ideologues, say, one who calls progressive taxation "the success tax," write economic history?

Having Snow as press secretary (or chief lying fuck, I'm not clear on the terminology) seems to have been the result of the inevitable crawl to the bottom by this administration. More flasehoods to pander off? We need bigger caliber Lying Fucks!

Just before bushie ends his squatting in office, the last press handler will be more openly criminal, replete with a gun. You heard it here first.

Ha! Apparently, Lugar is a Doghouse fan -- he categorizes some of his statements under a category called "Things I Say Just to Hear Myself Talk," too. His spokesman was backpedaling almost before Lugar sonambulated back to his seat.