Looking For History With Both Hands 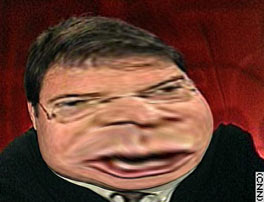 LET"S start at the bottom. Why the hell not?

Correction: The original text referred to Warren Burger as a "liberal" this was an unintentional error. It has been corrected in the text above.

Ignoring for a moment the question of whether the grammar itself proves the NatRev lets Goldberg write his own corrections, let's focus on the evidence of that "unintentional error". Here's the full paragraph:

Kennedy’s assault rallied left-wing interest groups to the anti-Bork banner for an unprecedented assault on a man the late Supreme Court Chief Justice Warren Berger dubbed the most qualified nominee he’d seen in his professional lifetime. As Gary McDowell noted recently in the Wall Street Journal , that time span included the careers of Benjamin Cardozo, Hugo Black, and Felix Frankfurter.

[The "Berger" is his mistake, by the way, not McDowell's; cutting and pasting eludes our nation's premier conservative pundit, although he's pretty good at mudpies.]

Now, far be it from us to question Mr. Goldberg's commitment to honesty, but we do have to look at that and notice a practical reason for intentionally describing (or wishin' and hopin') the late conservative Republican functionary and future footnote in Court history as a practicing Liberal at the time of the utterance, instead of the more likely "man who had recently taken a bad fall down some stairs". It is, of course, one thing for that sort of nonsense to turn up in the Journal as part of their anniversary celebration of the modern Right's sorry equivalent of the Edmund Pettis bridge; it's quite another that Goldberg could read it and swallow it whole. Burger was obviously making a political statement. We'd be more than a bit surprised to learn he'd parlayed it and a Tigers-Expos series for five large.

The only other explanation that springs to mind is that the error was "unintentional" in the sense that Goldberg confused the Good "Warren Burger" with the Evil "Earl Warren" from the days of his after-school drilling with those Bircher for Kids brand flashcards. At any rate we note that, just as Roy is constantly pointing out that Goldberg has penned the stupidest thing ever written until he writes again, we note that without fail anytime he speaks of history aside from the history of sci-fi blockbusters he finds ways to get it wrong.

Okay, I suppose we're obligated to glance at the actual piece. If we can understand how Burger, a high-class courtesan who had no reputation to lose save that of always pleasing the client, could utter such a jaw-dropping piece of stupidity, we're yet left to wonder why it is that Goldberg, fast approaching forty, fer chrissakes, can't manage the noble indifference of the junkie streetwalker. He can't write a column without pretending consideration of "both" sides, generally his own and the one he's assigned The Left, yet he's never written a column whose point of view couldn't be guessed ahead of time. There's nothing in this column McDowell didn't say three days earlier, or more sensibly, for that matter. But where McDowell focused (if that's not too misleading a term) on the supposed debate over Constitutional interpretation, Jonah goes right for the sandbox Stratego™ culture war he's most comfortable with:

If you think American politics have gotten nastier, crueler, and more symbolic over the last 20 years, blame Ted Kennedy.

What I do remember about the Bork hearings, since I was an adult at the time and not a doughy adolescent dreaming of icing those cinnamon buns on either side of Princess Leia's head, is that Bork was forced under oath to allow for "organic development" of that Constitutional text he insisted was inviolate, thereby giving up the game, something the last twenty years of utter failure to redefine the concept into something workable has double underlined. If 1987 represents anything in the history of partisan politics it's the sunset of the Reagan myth with Iran-Contra and the stock market crash, not that we expect either of those anniversaries to trigger a Goldberg reverie.

Excellent, as usual. And once agin, there isn't a line in Goldberg's drecky whine that isn't engorged with bullshit of one form or another. But damn. How prodigiously blinkered do you have to be to bitch about the cruelty and nastiness of Democrats and liberals when you, yourself, are the author of the inchoate epic Liberal Fascism: The Totalitarian Temptation From Mussolini to Hillary Clinton/Whole Foods/The Politics of Meaning? (To answer my own question, I guess on the order of Michelle Malkin writing a book about liberals being unhinged.)

Goldberg's stink is so unoriginal now it's as if he's still getting inspiration from the same steamy methane he conjured during a fartstorm he had in '82. It's Jonah's own flatus afflatus.

...since I was an adult at the time and not a doughy adolescent dreaming of icing those cinnamon buns on either side of Princess Leia's head....

Now that is just dazzlingly funny.

Blaming Kennedy for the coarsening of American political discourse is like blaming Anne Frank for the Holocaust.

I'm utterly shocked that there was no mention about Ted's driving. Isn't that a requirement when talking about him?

Oops. I didn't read far enough. Usually it's in the first couple of paragraphs.

Now there, darlings, is the perfect example of how not to mix your metaphors. Particularly when doughy is not followed by pantload. in which case, the depiction of Princess's coiff would be ....