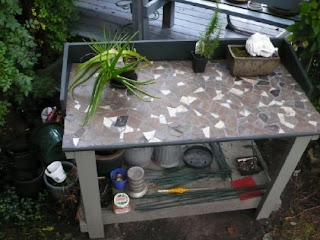 Instructions: 2002: build potting bench at wife's insistence, paint. Later, in response to her "Shouldn't you do something about the (rain) water standing on the table?" resolve to do nothing about rain water standing on the table. 2003: replace tabletop, paint, urethane. 2004: urethane. 2005: urethane, repaint to match new garden decor, urethane. 2006: urethane, decide to tile top as more permanent solution to weathering, buy tile, leave lying on bench. 2007: pharmaceutical testing. 2008: resolve, post-arthroscopy, to clean up mess. Replace tabletop, repaint, decide to actually get tiling done this time, decide to try mosaic, on the grounds that increasing the time required to finish the project by a factor of 12 will similarly increase the likelihood of its completion. Peruse grout aisle at local Lowe's. Discover, not surprisingly, that grout aisle, like every other aisle in the store, is dominated by the company which shows the greatest degree of quality control in selecting and distributing perks to Lowe's executives. Select color ("platinum") and exterior, sand-positive grout. Get home and use magnifying glass to decipher print on container; discover it's still gibberish, but that product must in fact be mixed with a proprietary liquid and not water, which must have cost the executives at the grout company at least a dozen extra hookers. Return to Lowe's, only to discover that the hole where said liquid is supposed to reside--several feet and a couple products separated from the huge selection of colors which are actually useless without it. Find Lowe's employee to confirm that shelf hole does mean they're out of the product, and not just that it's stored twenty-five feet above and no one wanted to get it. Also learn that unavailability is common, due to color and liquid mixture being packaged in one of those 6 hot dogs/ 8 buns relationships. Drive to next-closest Lowe's, find item in stock. Learn, additionally, that I had fallen for Standard Do-It-Yourselfer Ploy, where smaller, "Come On" packaging of tint was married to Stupid All-In-One bucket, exorbitantly priced and including convenient sponge and rubber gloves, "convenient" in the sense that they were right there in the bucket and I didn't have to go into the garage to get any of the countless examples I already owned, and which I was now required to purchase at pain of starting all over again. Smash tiles with hammer, begin lay-out process. Decide first idea doesn't work, start over. Reject second effort, begin third. Live through two weeks of torrential downpours and concomitant clean-up. Return to project to discover every piece ("tesserae") must be removed and tabletop cleaned again. Make aesthetic decision that whatever the next one turns out it be is The Fuckin' Design No Matter What. Complete. Rig tarp over table to wait out predicted rains. Return, glue down ever last motherfucking piece ("tesserae"), which goes pretty smoothly, assuming you like mind-numbing operations that take two days. Let dry. Mix grout. Apply diagonally using float. "Cut" excess to assure cleaner surface. Discover that there is very little excess. In fact, there's not quite enough grout to cover the entire project, despite the fact that the size of the color component suggested twice what was needed.  As a result, endure wife, who never, ever, reads directions, asking, "Did you read the directions?" Decide to wait and see. Clean with vinegar/ water solution after 30 mintues. Clean again one hour later. Dismantle rain fly. Inspect next morning. Decide that hairline gaps present aesthetic problem, albeit small, and that small untiled area in front will collect water. Realize at about this time that lack of moulding on front of table makes grouting problematic at best; return to Lowe's for moulding plus large-sized colored grout ("platinum") originally avoided as "too much". Employing "go home, use magnifying glass" method, learn that this grout mixes with fucking water. Cut moulding to fit; nail and glue in place. Mix small amount of grout, apply. Worry that color doesn't match. Ponder covering entire tabletop again just as unpredicted rain starts. Throw tarp over table. Return in 30 minutes, clean with vinegar/ water. Return in one hour, clean again, just as unpredicted rain begins pouring. Curse wife. Allow new grout to dry 12 hours. Return for inspection, decide color match is acceptible, decide to take picture to accompany hilarious "Do-It-Yourself" blog post. Retrieve green paint from basement for moulding. Decide to touch up back-splash for picture to cover remaining grout stains. Discover paint is, in fact, a slightly different green used in a different project. Repaint entire backsplash, and moulding. Tidy up bottom shelf of bench by removing unsightly materials to ground behind bench, forgetting it has been freshly painted. Take picture. Run to kitchen to rinse paint out of shirt. Resume pharmaceutical testing.

That's all there is to it! As always, readers are urged to send in pictures of their own completed projects, and the winner could receive a prize package consisting of whatever's left of my stash. But don't count on it.

Labels: The Arts
Email ThisBlogThis!Share to TwitterShare to FacebookShare to Pinterest

Yeah, well, I've been changing rain gutters of late. This winter's entropy caused them to virtually unzip on me. And while I don't mind water in my basement, I wouldn't dream of flooding out the ground squirrel (Cute? They're delicious!) holes around the house's foundation. Yeah, right.

At least you were creating your own mistakes/features in the project. Much preferred to fixing what some other asshole did to my house. I fucking hate gutters.

But all kidding aside, that table looks sweet. Don't tell me you're going to fuck it up with dirt and shit now...

Your projects seem to go just about as smoothly as ours. We've completely given up on such things and call in A Little Man From The Village when we need help. I'm still howling!

However, if you were building the bench also, I would have allocated six trips.

smashing the tile was probably the best part.

Hey, my eight year old did something similar in second grade art class. They had all the tots breaking big tile into little tile (perhaps preparing for life in the New American Gulag) and then they arranged it on a table. I don't believe they constructed the table though.

Look on my face when some other sucker (second grade parent) got stuck with the table: Priceless.

I would suggest True Value rather than Lowe's. True Value employees actually know something and will prevent the three trip problem as they will sell you what you need for the project the first time. That could be because they don't want to see me around again, but I'm such a friendly type that I doubt that.

Jeez, that's a nice-looking table, Dog. Can you do one for me?
I'll ante my gardening skills against your handyman skills, thinking of the summer I planted tomatoes (first renting a tiller and creating a raised bed with about $100 worth of soil, then fertilizing and applying a degree of care that would shame an ICU) and was rewarded with a bountiful harvest of, uh, 2. I figured those tomatoes worked out to about $800 a pound, and to this day, I cannot bite down on one without thinking, "Die, you miserable bastard."

As someone I've forgotten once said, "ambition is a poor excuse for not having sense enough to be lazy," and to my mind even thinking something like "mosaic tabletop" is DSM-IV level masochism. My projects like this (never chronicled in such an amusing fashion) always involve at least four extra trips to Y-Chromosome Depot to acquire: the thing you forgot to get, the thing you didn't know you'd need, the tool/part/substance you thought you had but can't find, and whatever it takes to repair what you just fucked up.

The most dishonest show on television is the one where a happy couple accomplishes such feats as pouring their own concrete driveway and constructing a gazebo, without a single hitch, albeit using $180,000 worth of power tools. And they do it together no less. It begs the question, do they have a do-it-youself sex life, too?

I'm still lucky to have an old family-run hardware store in the neighborhood. They became a TruValue franchise, but the woman who runs the plumbing department is still a genius.

And forgive my going on, but "Die, you miserable bastard" made me laugh out loud.

The extended sixth paragraph is the best description I've ever read of what must have gone on in the White House Situation Room from March 20, 2003 to present. Except you learned a lesson. And the story had an ending. And you wound up with an attractive place to store sphagnum moss, which in my opinion trumps yet another provincial by-election.

And that list of materials and tools would have made this piece far manlier than anything ever published on Townhall, including all the recent Second Amendment triumphalism. Except for the grout float. That, I'm afraid, was pure grandstanding.

Oh, and as bad as your Lowes may be, I doubt it's quite as abysmal as our local Home Despot on Sunset Blvd.

DIY center employees who don't want to work is one thing...DIY centers staffed by would-be actors who'd rather be waiting tables, thus keeping their days free for auditions, makes it really, really hard to find the towel racks.