Oh, So That's Why The Times Hired Kristol. 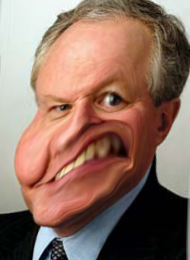 Or stay out of range. [rimshot]

Well, I wouldn't call it love, exactly, but I have to admit that if Dick Cheney did not exist it would have been necessary to invent him, either by digging up Dick Nixon and giving him the brain of a (stupider) criminal, or by giving Phil Gramm a charmectomy.

But consider this exchange with Chris Wallace on “Fox News Sunday”:

WALLACE: Did you really tell Senator Leahy, bleep yourself?
CHENEY: I did.
WALLACE: Any qualms, or second thoughts, or embarrassment?
CHENEY: No, I thought he merited it at the time. (Laughter.) And we’ve since, I think, patched over that wound and we’re civil to one another now.

No spin. No doubletalk. A cogent defense of his action — and one that shows a well-considered sense of justice. (“I thought he merited it.”)

And again, with apologies to Tom Lehrer, you gotta respect the courage of a right-wing rageball like the Vice-President who's willing to go on FOX and admit he said Fuck you to Pat Leahy.

You can't expect this to get any better. There's no theoretical objection to someone attempting to limn Dick Cheney, I suppose, unless it's another one of those pieces Slate assigns using Magnetic Poetry ("Sarah Palin" "Is" "Intellectual"). There is an objection to that someone being Bill Kristol, and not just that he and Cheney haven't exactly been hiding all those cozy, candlelit, têtes-à-têtes these past eight years (at this point all we don't know is which one's the trick). It's that counter-intuition isn't in the Republican playbook, which for thirty years now has consisted of repeating GOP! USA! and promising Remarkable Economic Success, Super Military Buffness, and Getting Back on Jesus' Good Side. To the long debate over the relative paucity of "conservative" comedy we can add that it's damn difficult to score points through cosmic buffoonery when your party is introducing a Flag Burning Amendment every Congressional session.

Certainly the events of the past decade have put the lie to this (that is to say, again; it's a measure of the power of pernicious PR bullshit that people now forget that the final years of the Reagan administration were pretty much the Bush II administration minus the humiliating military setbacks, which Reagan had had the good sense to schedule for his first term and counter-program with the Combined US Western Hemisphere [COMWESCOM] Command's glorious defeat of the 1st Cuban Overseas Typing Platoon. For that matter, which he had the even better sense to get the hell out of once it happened. By the way, the first six months of the Iraq War killed just thirty more American military personnel than did the two Beirut bombings six months apart). But they also seem to have overwhelmed the sort of claims these people made for decades, back when everything was going their way. It's as if, having determined that George W. Bush represented a choking hazard, we forgot the fact that we bought him in the first place because the ad said he was the perfect toy for teething infants.

But theoretical problems are dwarfed by the practical, which include a) the fact that Bill Kristol is a pathetic writer, an egregious liar, a moral coward, and a sorry excuse for a human being; and b) the fact that you couldn't invent any positive contributions Dick Cheney has made to his country or its politics without resorting to the worst conventions of science fiction. Cheney took the panoply of American political might, the power of the modern Presidency, and the treasury of the United States, and fashioned himself a secret lair, which he exited, rarely, only in order to out agents of our own government for personal gain or help lie us into the worst political decisions, well, in our history; to say otherwise is to find oneself obliged to apologize to both Herbert Hoover and James Buchanan, and who can afford the seance bills these days? By the time his Invisible Fortress was half completed he had no one left to talk to except Western Ranching and Mining interests and People United for Redecorating Harry Whittington's Face. Reagan's hagiographers and re-write men could at least pretend that being a genial narcoterrorist counted for something; whaddya do with Cheney? "Never proven to have consumed human flesh while on duty"?

Of course, this isn't what Kristol is really up to. Five-hundred-seventy of his eight-hundred-forty words will address Rod Blagojevitch, and, not surprisingly, in an entirely different fashion than his famed column [Caution: famed Bill Kristol column] claiming the prosecution of Tom DeLay, the Fitzgerald investigation of Scooter Libby and Karl Rove, the SEC investigation of Medicare grifter, medical clairvoyant, and friend of homeless animals Bill Frist, the partisan investigation of the duly-appointed partisan hack running PBS, and the horrid, horrid lies Dan Rather told about George W. Bush's heroic National Guard service proved a conspiracy to "criminalize Conservatism". Whereas this time a Fitzgerald investigation proves that Democrats are uniformly shady. The Cheney business is just cover for a sorry-assed wingnut hack job of the sort Kristol's been getting away with since the Times hired him. But it's made to serve a dual purpose, since the reality--which Kristol must face at some point, even if only when changing blades in his razor--is that, aside from the pages of the Times Kristol is bound to Cheney like Eng was to Chang, and they've been takin' hits off the same truck exhaust since 2003. The only difference is that Kristol, if anything, has been even more spectacularly wrong, since he's been obliged to do things in public.

So we get this, the one defense of Cheney he can come up with besides "When he says 'Fuck You' he means it":

Cheney’s loyalty to Rumsfeld didn’t stop Cheney from being a key behind-the-scenes player in encouraging George Bush to order the surge of troops to Iraq at the end of 2006 — after Rumsfeld had resisted adding troops for years. I’m told by several key advocates of the surge that Cheney was crucial in helping the president come to what was a difficult and unpopular decision — one opposed at the time by the huge majority of foreign policy experts, pundits and pontificators.

Okay, look: 'The Surge Is Working!' is now done, like your reign. The goddam thing did its job, namely, it provided enough distraction to allow Bush to refuse to admit defeat through the end of his term. Mission Finally Fucking Accomplished; right-wing diehards will be able to argue ad infinitum that "we didn't lose the war", or Bush didn't, just like they've been arguing about Vietnam for forty years, and with equal likelihood that the past will magically bend to their wills.

The reality is something else, and the reality is going to be there, this time. You managed to play the Nam-era You Can't Lose A War So Long As You're Still Paying Lip Service To It card one last time, but the fact is that this time most Americans understand that "Victory" meant something more than "Managing to solve the problems you yourselves created through poor planning, ideological rigidity, and the use of American blood and treasure for temporal political gain in the space of a mere five-and-a-half years". There will soon (thank gods) be little reason left to play pretend, beyond George W. Bush's, and Dick Effing Cheney's non-existent reputations. We will return to the public understanding--never gone away, just superseded by later Republican disasters--of Iraq as an utter waste and a military disaster.

And again we find, in a sort of mirror image of the Bush Is An Idiot, So Let's Forget That He Was Once Sold As A Genius And Give Column Inches To The People Responsible, historical amnesia: let us recall that back when various "key advocates" [Question: are they all named Kagan?] tell us the Dick of all Dicks threw his support behind this "unpopular" decision, it was the only fucking decision that offered any hope of his saving face. In 2006 the Bush/Cheney Gulag had the choice of acceding to the Strategically Delayed, Strategically Bearded by Lee Hamilton recommendations of the Iraq Study Group, with its carefully denatured approach to the extensive motherfucking generation-long multiple fracturing of American military strength caused by the Iraq War, or to simply ignore it and maintain present troop levels past the breaking point in an effort to avoid acknowledging failure. Guess which one it chose? After that, declaring victory was a foregone conclusion, though, admittedly, it invoked the considerable risk involved in telling the American public it was #1 in something. Violence is down, due to any number of factors, but there's precious little in-depth reporting about that. (I got to watch last night as CBS's abominable Harry Smith cheerfully enthralled listeners with the tale of The Little Commuter Train in Baghdad, that now carries nearly a half-dozen passengers. Things are returning to normal! It's five-and-a-half-years and untold trillions of dollars, dude. A sorry-assed third-world train chugging through a blasted Malaria Town is a Success Story?)

The major thing that's not reported in all this is the added cost to the already disastrous effect on military preparedness we might find ourselves needing to combat actual genuine threats some day. We don't really know what it's cost us to stick a toothpick through a cherry tomato and garnish the footlong shit sandwich just so the right could exit without publicly admitting it smelled anything funny. In something just over forty-five months, from the invasion of Iraq to the Kegan/Keane PR blitz, Dick Cheney managed, though force of intellect, to grasp the need for more troops! Compare Franklin Delano Roosevelt, who in forty-five months after Pearl Harbor, had only managed to defeat Nazi Germany, the Japanese Empire, and be dead for five months. Hey, everybody! Rod Blago's got funny hair!

I suspect Kristol's soul is just a bit more distorted than that photo.

I've been hoping that my New Year's present will be a low-key announcement along the lines of "the Times and Mr. Kristol have agreed to part ways," but if I get my wish, it will be a shame not to be able to read your responses to his columns any longer.

Not that he won't continue to bloviate at the Weakly Standard, but I worry that your outrage won't be quite as white hot when he's only defacing pages in the low-rent neighborhood.

Outstanding takedown, and on The Surge (TM), too.

Look...everything you've written is absolutely true, but the sad truth is; you've got this blog, which I happen to love, and William Fucking Kristol has The New York Times. The Bush Legacy Project is gathering steam and rolling along nicely, aided and abetted by a corporate media that Richard Nixon would have killed for (not that he didn't consider it). Keep swinging, Mr. Riley.

WALLACE: Did you really tell Senator Leahy, bleep yourself?
CHENEY: I did.
WALLACE: Any qualms, or second thoughts, or embarrassment?
CHENEY: No, I thought he merited it at the time. (Laughter.) And we’ve since, I think, patched over that wound and we’re civil to one another now.