Oh, So That's What Lou Cannon Thinks About Ronald Reagan 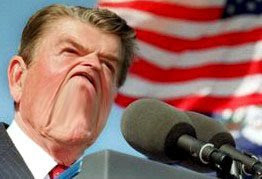 WHEN last we tried to avoid the report of Lou "Boom Boom" Cannon he was inaugurating the New York Times 100 Days Blog by inventing ways in which the recently-elected Barack Obama owed his popularity to Ronald Reagan, on account'a Reagan was wildly popular, too. So popular, in fact, that Lou Cannon has taken the rest of his life off to detail it in, I think, seventeen volumes and counting, and not counting the one where he and his son tried to extricate Ol' Dutch from George W. Bush once the latter proved radioactive. (His co-author son himself being the co-author of Boy Genius: Karl Rove, the Architect of George W. Bush's Remarkable Political Triumphs, which, you may be certain, was published at the height of George W. Bush not being radioactive.) Plus Reagan had to deal with bad economic news an' stuff, just like Obama does, and Obama praised him on the campaign trail before Hillary made him take it back.

Now, after roughly 2300 hours of reflection, Lou Cannon has decided that Barack Obama owes his popularity, and early success, to Ronald Reagan.

So first lemme say this about the Great Man school of historical simulation: it fills a much-needed void *, but my theoretical objections just don't sink to a visceral level, and I'm happy to read military history, or even the occasional hagiography update. If this is what the Times' editors want to kill trees for nobody's gonna stop 'em, unless it's an increasingly indifferent public. But it's one thing to be condemned to reliving history, and another to rewriting it as People magazine filler.

And if Lou Cannon has now written enough words about to fill the actual gaping chasm between The Gipper's reputation and his actual (positive) achievements, if he either imagines that The Great Communicator's (how many fucking nicknames does a person need, by the way? This was a clue.) Presidency is as important to contemporary audiences as twelve centuries of Roman history was to Gibbon's, or finds the money good enough to pretend it is, it's his business.

By why is it the Times'? Reagan assumed office twenty-eight largely horrendous years ago. That means that anyone over the age of forty-five had the opportunity to vote fer or agin' him twice, and no doubt plenty who were too young to do so yet have accurate recollections of the man and his ersatz-successful Presidency. Why do we have to hear, again, from a man who probably since I began typing has released yet another Reagan book? "Wait, wait, " sez Lou. "I almost forgot. He was really good at communicating stuff."

Sure, to be fair, I've never read a one of 'em; having lived through the actual Reagan while relatively sane, though in constant fear for my brain, the eight Ionesco's Rhinoceros years of his Presidency, followed by the eighteen years of Republican-controlled governments naming everything was wasn't nailed down after the man, plus the three-year coverage of his funeral, I'm about as likely to pick up twenty of his biographies as the theoretical survivor of the Spanish Inquisition is to rent King of Kings (the imdb page includes spoiler alerts). And Cannon's canon is frequently praised as "even-handed", although that praise comes from the likes of George Eff Will, Ed Meese, and Michael Barone, and from the back blurbs of his books. We don't want to push it, but in excerpt and article Lou Cannon comes across as a nail technician to the Conventional Wisdom, something which is guaranteed to the please the George Eff Wills and the apparently unslakable Reagan book-buying public.

A closer look suggests, however, that these two presidents are not as far apart as their partisans and critics believe. For all his thunder about the dangers of big government, Mr. Reagan during his eight years in office preserved the core of social programs that were the basic legacy of Franklin Roosevelt, his first political idol. Mr. Reagan’s high-risk budget director, David Stockman, tried an early maneuver that would have reduced Social Security benefits. After this plan backfired, Mr. Reagan named a bipartisan commission that proposed mild reforms that were embraced by the Democratic House speaker, Tip O’Neill, passed by Congress and extended the solvency of the system for a generation.

The test run was a proposal to withhold taxes on interest and dividends, which was met with was met with so much orchestrated screaming from the Walkers and Portable Oxygen demographic that the Reagan administration turned tail and never broached the subject again.

Conservatives urged Mr. Reagan to take another run at Social Security or other entitlement programs. He never did. As the columnist George Will observed, Mr. Reagan understood that Americans were indeed conservative, and wanted to conserve the New Deal.

Well, one good blurb deserves another.

But lemme tell ya, as someone who lived through this, and doesn't get sent free copies of Lou's work, more's the pity, this is not quite the way I look at it. After Reagan's test-marketed end-run on Social Security was resoundingly thrown in his face--it was widely reported that way at the time--the Best Dressed Administration in History simply invoked the cover story: we weren't attacking Social Security! We love Social Security! Why, Ol' Dye Job's political idol was FDR! He wants to be just like him, and it's really unfortunate that the Social Security program is going to go broke right after Joe McCarthy reveals his list of 497 Communists, and we just need to smarten it up around the edges. To perpetuate it, don' cha know.

But why? What's fucking "conservative" and "small government" about extending withholding taxes, of all things? It was a sneak attack on Social Security, it was discovered, spotlighted, and the cockroaches started scurrying. You can say this proves him to be a practical politician if you wish; I say it proved him as a lying opportunist spokesmodel for a particular category of Wealth, one which is, and was, largely populated by right-wing ideologues, but not by complete idiots. The idea was to drain the public treasury while simultaneously reducing their own part in it. No one gave a fuck about ideological purity, which was just a sop to the yahoos who voted 'em in anyway. Somehow the man gets credit for dropping his ideology despite the fact that he was too cowardly to try it that way in the first place.

This is the thing I will never understand, at least beyond the extent to which I do understand it, namely, that lying comes as naturally as breathing to some people. Reagan ran for President nearly as long as Harold Stassen did, as a one-note candidate: the scourge of the National Debt. He then managed to nearly quadruple it in eight years once he had the reins. The solution to the Debt was not exactly a secret, and certainly not an arcane one: either you raised taxes (anathema to his handlers), cut "defense" spending (anathema to his party, especially after Vietnam), or you attacked Social Security. This the Great Communicator did by sending up a trial balloon, painted black, at 2 AM of a moonless night, after which he said Fuck It and spent like he was on shore leave. He greatly accelerated the Kid Meets Candy Store theory of "defense" spending, with, e.g., Star Wars, the Navy's Incontinent Carrier Construction Program (ICCP), even the revival of the overpriced-before-the-cost-overruns Continually Evolving Mission (CEM) B-1 bomber just because Carter wisely 86d it; everything, in fact, except the spare parts, maintenance programs, and personnel retention a genuinely pragmatic man might have insisted on. We are presently living in the fucking midst of a reality-based smackdown of this and his supposed economic miracle. Which, of course, means he gets credit for Defeating the Soviets and Saving Democracy Herself.

So no, perhaps Reagan wasn't a raging ideologue. Perhaps he was more an ideologue and a practical politician, combining the worst features of each in one highly-marketable package. If you, or Barack Obama, need a lesson from all this you might consider a paper on How it is Some People still don't think Once was Enough.
_______________
*Stanislaw Lec or Moses Hadas, I think. I get them confused.
Labels: Ronald Reagan: The Myth and the Myth
Email ThisBlogThis!Share to TwitterShare to FacebookShare to Pinterest

Nah. The current occupants learned the lesson of the Clinton administration instead - that being people with summer houses on Martha's Vineyard will talk mean about you if you try to fix things.

The lesson of the intervening Bush administration - that they're not so much invested in pretending they were right as they are in defense stocks and educational testing services - seems to have eluded them so far.

No, Reagan wasn't a raging ideologue; he was a fucking idiot. He was manipulated, quite cleverly, by a bunch of raging ideologues (who would use what they learned from manhandling Dutch to engineer W's ascension and the subsequent pillaging of the rest of the national wealth, such as it was; the best takedown of W remains Will Farrell playing with a ball of yarn while the Grownups discuss taking over).

I remember the pall that descended over my liberal (as in very) campus the night Reagan was elected; many alcohols were consumed, because we knew it would be ugly.

The other image of Reagan is actually fictional: Neal Stephenson's version, in Crytonomicon. Fictional, yes, but accurate nonetheless.

My first eight years on active duty came during the Reagan administration(s). He spent like a drunken sailor on shore leave and then went off to give speeches to the Japanese for $2m a pop, leaving the military to make personnel cuts until it bled to try to meet the budget deficits. I truly hate very few people but he is one of them.

In Reagan's Debt, eh? Well, yes, I guess we all are, by a few trillion.

But look at bright side, since the additional piling on of the Bush years, we're now so far in debt that nobody even pretends that it will ever be paid back. We'll have get our Weimar on to settle it, which will bankrupt our children, but our grandchildren will be alright... maybe.

All I saw was your title in my feed reader and I'm already laughing.

The rest was pretty great, too.

It's all so clear now. Obama is like Reagan!

Obama's idea for shovel-ready projects? Totally Reagan's idea. Only IIRC his plan was to steam-shovel shit into the Boston Harbor, but still.

And Obama "looking ahead" and letting the previous administration's minor foibles slide? Ditto for Reagan with Carter's horrendous scandals. Like, um, the continued destruction of the Nation's morals when he admitted he lusted in his heart, or, uh let's just say I'm glad I don't know more about Bert Lance's peccadilloes (I still can't for the life of me understand why our national media doesn't point to Lance's involvement with the National Bank of Georgia as the harbinger of all of today's banking problems).

You need to read Will Bunch's "Tear Down This Myth," about how nothing we're told about Reagan and that era is true: