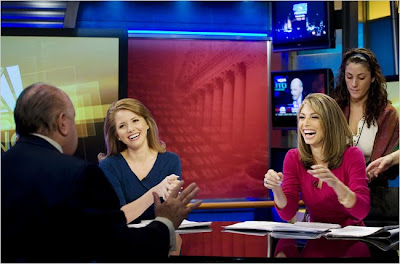 Roger Ailes cracks up the help. From the front page of Sunday's
New York Times fluffery of Ailes' business acumen. Separately, or together,
all you need to know about the decline of Western Civilization in the 21st century.
Helene Cooper, "The Label Factor: Is Obama a Wimp or a Warrior?" January 10

IT'S certainly possible we've always been a Nation of Liars, but I think--at least I like to think--a Nation that Can't Tell the Fucking Difference is of much more recent vintage.

Y'know, I distinctly remember the first time I opened a candy bar and found that the internal cardboard form was 20% larger than the bar itself. And I distinctly remember the feeling of having just been snookered, which means 1) that I was old enough to know that grown-ups didn't necessarily have your best interests at heart, and 2) that I was used to candy bars being roughly the size of their wrappers. And I'm reasonably secure in the belief that each succeeding generation has had its comparable commercial example readily at hand.

Somewhere along the line we reached critical mass; at some point the constant push of legalized rapine became not just excused, or even acceptable, behavior, but the standard by which all other human achievement is judged.

And yet I find it impossible to believe that perniciously induced greed and self-centeredness makes anyone imagine that driving a Street Panzer with one hand while yammering away on the phone is a good idea. And I find it difficult to explain how one writes this:

WASHINGTON — Like every Democratic president since John F. Kennedy, President Obama is battling the perception that he’s a wimp on national security.

It’s not just coming from Republicans (for example, Dick Cheney’s accusation that Mr. Obama is trying to pretend that the country isn’t at war). Now barbs are coming from the center too. This week’s Foreign Policy magazine has a provocative cover: Mr. Obama next to Jimmy Carter with — gasp — an “equals” sign in the middle. New York Times/CBS polling shows that public approval of Mr. Obama’s foreign policy dropped 9 points to 50 percent between last April and November. Leslie H. Gelb, president emeritus of the Council on Foreign Relations, wrote on the Daily Beast blog two weeks ago that Mr. Obama needs to toughen up with his adversaries. “He puts far too much store on being the smartest guy in the room,” Mr. Gelb wrote. “He’d do well to remember that Jimmy Carter also rang all the I.Q. bells.”

…while somehow missing the point that one has now defined "the center" as "'Doctor' Heinz 'Henry' Kissinger".

That Foreign Policy corker was authored by Walter Russell Mead, who is the Kissinger Senior Fellow at the…shit, I meant to write this down…oh, yeah, something called the Council on Foreign Relations. Reader, tasked with turning that into something the Times found sufficiently solicitous of its rabid right-wing and devoutly religious readership to be included in the "Week in Review" section, I doubt you would come up with "centrist" to describe it. But there you go.
[Later we will hear from former Clinton official Stephen Sestanovich, who is now at the Council on Something or Other, former Clinton official David J. Rothkopf, who isn't, but who left the Clinton adminstration to become managing partner of Kissinger and Associates, and some guy who's a Middle East security policy fellow at the Center for American Progress. Y'know, just to make sure we're hearing all sides.]
Believing that the world functions best on lies, whether through some epistemological tap dance, or because you think whatever benefits the guy signing your paycheck is the right way to go (Oh, Mr. Ailes, you are a stitch!), is one thing; writing as though this sort of nonsense is perceived wisdom is something else. The Council--the fine folks who brought you Korea, Vietnam, and Iraq--presented in part by your local Coca-Cola™ bottler--might represent what passes for centrism in a Washington where, in some cases, Barack Obama passes for liberal, but it's hardly the median in the "US Foreign Policy has been an unmitigated disaster" to "Bomb Bomb Iran" continuum. Put another way, some aspect of foreign policy under President Obama is now being criticized as deficient in flashy swordplay not merely by despised, draft-dodging war criminals, but also by highly-paid mouthpieces for American military hegemony. You can almost feel the momentum, can't you?

And let's put it another way, as long as we're at it: in one year in office, the precise amount of time it took his predecessor to pull troops out of Afghanistan in order to conduct a more thorough clusterfuck in Iraq, which is why the current President has the opportunity to be twice a Wimp in the first place, the Obama State Department seems to have occasionally engaged in diplomacy. Which threatens to turn him into History's Second Greatest Monster, and America into the sort of Pitiful Helpless Giant afraid to ship its blood and treasure overseas to lose to improvised WWI technologies.

Th' fuck are these people even still in the Arena, let alone holding the whip hand in the Big Race?

Of course, accusations that Democrats are genetically softer on threats to the Republic are nothing new. After World War II, Republicans mostly stopped attacking the Democrats as the party that had gotten America into two world wars, and began calling it soft on Communism. Roosevelt’s agreement to the postwar division of Europe at Yalta, followed by China’s fall in 1949 while Truman was president, spurred that on. John Kennedy managed to emerge from an early fiasco at the Bay of Pigs and achieve the counter-image of a cold war liberal, thanks to the Berlin and Cuban-missile crises; then Lyndon Johnson’s fear of being labeled “soft on Communism” helped him override his doubts about getting deeper into Vietnam. But after that, the ill-fated antiwar candidacy of George McGovern, followed by Jimmy Carter’s inability to rescue American hostages in Iran, sealed a stereotype of Democrats as, well, wimps.

Look, Ms Cooper: it's the United States, where a lot of native-born citizens who actually lived through those events have absolutely no idea of the history, so I'm going to give you a provisional pass. But, fuck, does it make sense that Republicans "stopped" attacking Democrats as "the party which got us into two world wars" after the Second World War? Meaning that criticism was current during that War? Y'know, the one everybody loved, and supported, while behaving like Ozzie and Harriet, or respectful, in the case of the Coloreds, and immigrants? Do you think "soft on Communism" was inherently threatening, or was it, you know, accentuated at times? At whom do you think it was hurled? (Here's a hint: one of 'em's got a birthday coming up.) Yalta? Who fucking lost China? Listen, that might've played at the time, but suggesting that these were one-way arguments, with Republicans as the Top, is not just to view them through the fog of the selective retelling or Manichaean oversimplification that's gone on since, but to confuse the overtly Republican version with, well, the center. Yes, indeed, we agreed, at Yalta, to the demands of our allies the Soviets--who had been the ones to actually, y'know, defeat the German army, at a cost somewhere above 14 million military casualties-- for a buffer in Eastern Europe; yes, indeed, they proved to be liars and brigands. What, exactly, should we have done? The Truman administration didn't exactly knock itself out upholding our end of the bargain, and the Brits proved, as always, to be masters of the art of international passive-aggression and the bare-bottom spank. What were we supposed to do in China? Fine, these matters were grist for the mill then, and you're free to report them as such. But if you wanna use them now to cast aspersions on FDR--let alone Truman, who's personally responsible for fifty years of tub-thumping Cold Warfare spending--then you might try looking into facts.

Yes, in a climate of political insanity both Kennedy and Johnson felt forced to display sufficiently warlike mien. But--we're beginning to see a trend here--the actual results are actually in: not just the Bay of Pigs and Vietnam, but an American President playing global thermonuclear brinkmanship over no real threat to American security. Maybe it's time that got included in the lesson. Kennedy knew Soviet missiles in Cuba posed no real threat, or none beyond the standard insanity of the Cold War; Johnson knew that Vietnam was unwinnable before he escalated it. Bush II knew there was no imminent threat from Iraq. Maybe it's the goddam war mongering that's the problem, Ms Cooper.

And look, I'm really fucking tired of defending the results of the '72 election, the one won by a war criminal and petty felon, or of debating Malaise Forever! with someone who was wearing training bras at the time. If there's some way Vietnam, or the domestic economy, would have turned out worse if George McGovern had been elected, please let me know. His public immolation by the Democratic party following that loss sure didn't prevent it from losing again, or by bigger margins. As for Carter, you can make the case--though you have to be the sort of person who's interested in making cases--that we'd not be in our current state of pants-pissedness had we followed through on those "wimpy" foreign policy objectives--fairness, cooperation, even-handedness, human rights--instead of arming the Saudis, cozying up to Sadam Hussein, and Presidential decisions made in "fear" of appearing to understand the distinction between the modern State of Israel and the Biblical Israelites. Though I note, here, that we've suddenly decided that history does count, if sporadically: "failed to rescue the hostages"? Remember the Mayaguez!

And, y'know, I'm tired of defending Obama. If you would like to look at the actual process of labeling and conclude he's being forced to make stupider decisions than he'd make otherwise, be my guest. I remain agnostic. But arguing that he's making insufficiently stupid ones just boggles the imagination.

Labels: Is There Some Reason We're Importing Them?
Email ThisBlogThis!Share to TwitterShare to FacebookShare to Pinterest

You could almost make your post a macro and just change a few particulars every so often. (It's apt that you began with the Ailes puff since the WWII to Carter/hostages graph you quote is such a generic Foxipedia view of that history in a nutshell.) But I'm not even sure what Ms. Cooper is reporting here:

Some experts say that the weakling label is more about this city than Mr. Obama
...
And, speaking of Iran, this is the year when Mr. Obama must go from Dr. Jekyll to Mr. Hyde with that country, the experts say.
...
Then there’s terrorism. Mr. Obama will also have to demonstrate some tangible action there, the experts say, to dispel the notion put forward by the Republicans that his plans to shut down the detention center at Guantánamo Bay, Cuba, makes Americans less safe.
...
“He needs visible victories there, like hits on Al Qaeda leaders, so no one is able to put together a narrative that says he’s weak,”

Yes, I love the citation of unnamed "experts." But for the lack of exclamation points scattered about the piece, I would think Ms. Cooper had cut her chops writing herbal supplement ads.

But something else gave me pause, and that was this: "The Truman administration didn't exactly knock itself out upholding our end of the bargain." This is off topic, but from what I've read (I'm no scholar, but no doubt you can guess as much) it was the Soviets who reneged on the provisions of the conference. How did his administration not live up to its end of the deal?

helped him override his doubts about getting deeper into Vietnam

I can think of about twenty more-appropriate verbs for that sentence.

These people are monsters.