Evidence Of Life On Mars

THAT title (mine), meant to be sneeringly condescending, of course, yet reminds me that last week my Poor Wife and I watched NOVA scienceNOW! ("The PBS Series With The ShortingOUT CAPSLOCKkey!") which is narrated by the affable and charismatic NEIL deGrasse TYSON, co-host of The Daily Show. The episode was entitled "Can We Make It To Mars?" and, since "No" apparently would have left them 59:49 short they went with "If We Pretend We Could Make It To Mars, Can We Make It To Mars?" There may be something to be said for blurring the distinction between hopeless optimism and unfettered hallucination, but this wasn't it.

We never quite mentioned who it was who was paying for all these overripe Star Trek fanboys to Live The Dream of thinking up impossible space motors or developing the Thousand-Year Jeno's Pizza Roll. I guess maybe PBS is a little sensitive about that sort of thing. Even my Poor Wife, who, we can safely say, is more sanguine about this stuff than I, on the grounds that no one on this or any other habitable planet could be less sanguine about it than I, found the thing cloying after about twenty minutes. Columbus! Magellan! With enough luck, some day we'll manage to get a dozen humans to Mars with enough of them still alive to enjoy being stranded there and looking at rocks no one's ever seen. How many billions ya need?

You know, you never see health care presented that way, or education, or nutrition, or Social Security. Isn't it interesting how many trillions of actual dollars we spend perfecting "adult" versions of little boys' toys, and how easily the scam perpetrates itself? Maybe we need Freddy Freeclinic, the Healthcare Provider with Laser-Surgery Eyes, or Rick Rational, Social Security Administrator by Day, Living Wage Advocate by Night, Batteries not Included. Somebody call the Chinese.

Anyway, Brendan, who I thought was a friend of mine, launched that latest in the never-ending Daniels flackery my way a few days ago. It's from something called "Politico" which is some sort of internets deal, kind of a Slate with the amusing stuff--intentional or inadvertent--removed.

And this one is a pinnacle, of sorts, since it postulates Daniels as a great favorite of the Elites and Punditologically Adept, which is explained by recasting unexamined bullshit from those earlier right-wing publication fluffings as simple morality tales for children.

If pundits and columnists represented the GOP base, Mitch Daniels would be the odds-on favorite for the presidential nomination in 2012.

And as an added bonus, the aggregate IQ of the GOP base would rise .005%.

The Indiana governor has been showered with favorable coverage from political thinkers and analysts in recent months, most of which heaped praise on his thoughtful and principled approach to governing while celebrating his serious yet down-to-earth mien.

As my dear granny used to say, "Th' fuck talks like that?"

“Of all the Republicans talking about the deficit these days, Mitch Daniels, the governor of Indiana, has arguably the most credibility,” claimed The New York Times’ David Leonhardt in an Indianapolis-datelined economics column recently.

And which, as we noted in an Indianapolis-datelined turd in Leonhardt's Single Malt, reached that conclusion by avoiding all evidence to the contrary, including the billion-plus the state owes the Feds, plus interest and penalties. In fairness, Leonhardt stopped short of the full-on hard-on Daniels gives the Wall St. Journal and Rich Lowry and Steven Hayes at NRO. But he bought the image, which is a lot more important to Martin than that wonky details stuff.

Daniels is hardly the first presidential prospect to be greeted with bouquets from the cognoscenti as the Last Honest Man in politics.

Though it is possible he's the Most Dishonest Man to hold the title. Which probably says more about the cognoscenti than Daniels.

There is a long, bipartisan tradition of White House aspirants who play the truth-teller role and they almost invariably receive better reviews in print than at the polls.

Bruce Babbitt, Paul Tsongas, Ross Perot, John Anderson, Lamar Alexander and John McCain in 2000 all won plaudits from elites for their willingness to speak hard truths about the real problems facing the country rather than just pandering to the partisan rabble.

Usually, as it is now, much of the admiration is rooted in the truth-teller’s focus on the looming fiscal iceberg and willingness to tell audiences what they don’t want to hear.

And, as it is now, none is rooted in the truth-teller actually telling the truth.

Better yet, the candidate pushes aside the divisive social issues that are thought to be non-negotiable with the party bases.

Daniels voiced such an idea fairly explicitly in a much-buzzed-about Weekly Standard profile last summer, calling for a “truce” in the culture wars so the political class can get down to the business of repairing the country’s finances.

Let us pause for a moment and ask--sure, it's not the first time--how exactly one gets to be an Elite Punditating Cognoscenti type while remaining utterly innocent of the fact that people running for public office try to position themselves by saying shit?

Here, again, is the deal: Big fucking deal. Daniels tells some guy at the Weekly Standard that he's more interested in repealing what's left of the New Deal than making useless and divisive attempts to inject Backwoods Jesus into every political issue. In return, what? I'm supposed to regard this as a guarantee? Because the Punditatin' Elites would never let him go back on his word? The Religious Right won't be vetting his Attorney General the way they have every Republican AG since Bush I? There won't be an immediate cut-off of aid money to any third-world country where any health-care provider mentions to a pregnant woman that abortion is legal in the United States? What? Absent Mitch Daniels' Presidential imprimatur, Snopes will run out of crackpot emails? The man never even defined where he intended to locate the back burner. He read some fucking political tea leaves, and said something that sounded like an uptrend.

He's not gonna out-Christian Sarah Palin, or Mike Huckabee, or Mike Pence. We all know it. He's kept the religious nuts in line, mostly, in Indiana--in fairness, they get the same Back of the Hand from the Republican party generally every legislative session (allowed to introduce bills in the strategy sessions, which die there), because they're fucking nuts. Recognition of this fact does not make you a moderate. And it wasn't long into Daniels Campaign Protective Coloration #2 that Mitch announced his "fifty-year" church membership, which is something I've never heard him mention before. If Mitch Fucking Daniels becomes the Republican nominee it'll be with the acquiescence of the Religious Right, not over its howling objections.

But it’s not just his policy outlook that titillates the elites. The diminutive Hoosier has nurtured a profile as a mature politician whose outlook extends beyond the next news cycle and whose demeanor exudes seriousness. 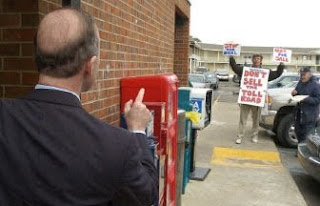 Okay. I do rest my case. Or rather, you just made it for me.

He went to all the right schools (Bachelors, with honors, at Princeton’s Woodrow Wilson School and a law degree, with honors, from Georgetown), learned at the knee of a political Wise Man (veteran Sen. Richard Lugar) headed up a think tank (Hudson Institute), was a top executive at a Fortune 500 company (Eli Lilly), and for two terms has been a governor, where, as the mandarins’ formulation goes, all the real policy innovations take place.

Alternately: from a fairly well-off family (paternal grandparents were Syrian immigrants); became weaselly faux-moderate Dick Lugar's butt boy while still in high school; suckled that teat for sixteen years; became president of the proto-neo-con and anti-environment Hudson Institute shortly after Indiana Republican government largesse convinced it to move to Indianapolis; left after three years to become Eli Lilly's Republican fixer; left after a decade to destroy the US economy for George W. Bush; left to become Governor of Indiana.

Granted, this beats hell out of Sarah Palin's c.v., but it doesn't exactly fill me with the Warm Glow of Guaranteed Open-Minded Moderation, somehow.

What makes Daniels different from, and potentially more formidable then, his truth-telling predecessors is that he’s not just The New York Times’ idea of the ideal Republican. The man known as The Blade during his tenure as Bush 43’s first OMB chief also has more traditional conservatives swooning.

I hate to be Johnny One-note here, but is there anyone on the planet other than Beltway insider Punditasters still referencing Bush 43 Nicknames as though they were badges of honor? While we're at it, is there anyone else who still says "Bush 43"?

“He’s a Reaganite who is not trapped in 1980s nostalgia,” wrote National Review editor Rich Lowry last year. “He’s a fiscal conservative who believes not just in limiting government, but in reforming it to address people’s everyday concerns; he’s a politician of principle who refuses to sell his program in off-puttingly partisan or ideological terms.

Well, he called 2006 Indiana House Democrats "car bombers" for refusing to agree with him, and then he told the rest of the state it was too backward to understand the perfection of his tiniest idea. But those are really terms of endearment in these parts.

So for "makes more traditional conservatives swoon" read "NRO, Weekly Standard, and WaPO flunkies agreed to blow him back when he looked like their best hope to avoid an "Abbot/Costello '12" ticket. Back when the Right was talking about "post-Reaganism". For twelve minutes. And for "politician of principle" well, just lie down until the fit passes.

The idea of a skilled manager who is passionate about ideas, can claim real policy accomplishments and speaks bluntly, but not bombastically, has thrilled influential conservatives like Will and Charles Krauthammer who see a Palin nomination as akin to a suicide pact.

Y'know, despite my estimation of the collective wit of George Eff Will and Charles Merkwürdigeliebe Krauthammer, it doesn't really surprise me that a Palin nomination would frighten 'em. Being thrilled by Mitch Daniels, on the other hand…
Labels: Palin 2012
Email ThisBlogThis!Share to TwitterShare to FacebookShare to Pinterest

"so the political class can get down to the business of repairing the country’s finances."

given that "the political class" created the problems...why is he so sanguine about their quick fix-it abilities?

I hope you'll keep this piece on the top of the pile for when Mitch formally announces. Then you could email it to David Broder.

Its written like a Fashion Magazine column about the latest TV starlet bimbo's new haircut.

Mars. Gawd. Just another place for us to litter.

I think the space program is as good as any other make-work stimulus in this economy and better than most. At least we get some technological dividends from it. For example most of the pioneering work in solar panels was done in the space program. So, I don't think its necessarily fair to characterize fans of the space program as starry eyed fanboys.
Mitch Daniels does seem like a douchebag though, so no arguments there.

NASAs done hundreds of exciting and very important projects, they're just not as "sexy" as moon landings. People are fascinated by our Mars explorers. Working out how to live on Mars would create useful information for us of how to live on a horribly changed Earth in the not-too-distant future.

co-host of The Daily Show. LMAO