Orange. A Lot Depends On Who's Wearing It. 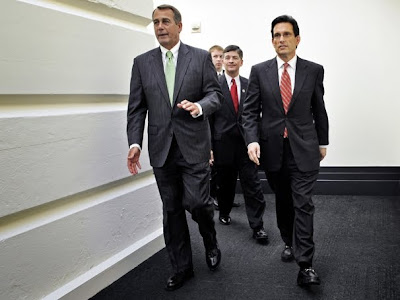 Christ. It's like being governed by the guys who play the Rat Pack in
Lifetime's Plaything: The Angie Dickinson Story. 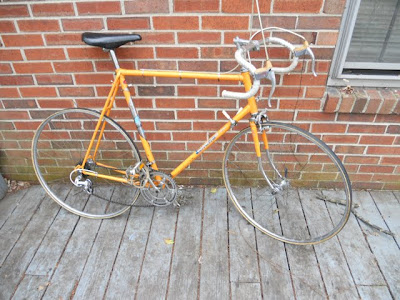 Honey, deck cleaning will be a little delayed this year...


PICTURED above are two more reasons posting has been light: nausea and time wasting, and please don't tell my Poor Wife about the second one, a $50 sherbet-colored French racing bike (Gitane Interclub) from c. 1975 which I'm getting into riding shape. The guy I bought it from said he'd bought it as a yearling from his buddy in 1977, the year my beloved Raleigh Super Course sprang to life in the forests of Nottinghamshire. It was well-used, and not always carefully. He spoke wistfully of its magic. How much of that was for the bike, and how much for lost youth I do not know; lovers of old French steel, and particularly Gitanes, have a Gallic intensity, at least online, but he was also downsizing from an enormous place up in Carmel, where soul is something you surrender at the county line. I didn't ask what tragedy had flung him there.

Whatever it was, the bike seems to've gone from plein air joy wagon to barn decoration in an instant now frozen; still has the original tires, probably, and remnants of tape, and other little routine maintenance tasks appear to've been ignored. About what you'd expect. Something like 1/8" of grime to be removed, on average, and some botanical sample wound around the jockey pulley. Many bikes of the era have mechanical idiosyncrasies, but the French made this an art form: stem and crank sizes are theirs and theirs alone. This will not be a whole lotta trouble to deal with, god bless the internets. Sew up tires I had to order, because local bike shops stock only high-end racers they can soak their high-end racing customers for. New cabling, once I decide on a color, which sounds like an easy exercise in personal preference but quickly falls into the rabbit hole of aesthetics, because "white", the obvious and period choice, becomes "glare white" when juxtaposed with the patina of age, and "blue", the next obvious choice, would make me look like a young trendoid. Or, rather, like a crazy old coot who'd swiped a young trendoid's bike. That, and a good cleaning, seem to be all that's required for the legendary Suntour V derailleur and Mafac Racer brakes (inscribed Marfac "Racer") to return to full operation. Having Marfacs means I will now own a bike with operating brakes, and not Gradual Velocity Reducers. This may come in handy, since the frame is maybe a couple centimeters too large for me. My thinking was that, at 57, my testicles are really pretty much for show now, anyway.

I probably could have parted the thing out and tripled my money: in one of those odd little twists the brake lever hoods, which, instead of the usual full-body cover consist of a kind of bikini bottom for the upper surface, fetch $35-50 on eBay in used condition; mine are a little cracked but serviceable. The unexpected money-making potential comes from the fact that the previous owner scratched his Social Security number on the thing as a theft deterrent.

It's easy for a man my age and temperament--though it may in fact be difficult to imagine a man of my temperament living to be a man of my age, and with all his natural teeth--to get lost while scraping off grime and seeing old metal come back to life under comparatively little effort, and wonder why th' fuck anyone shells out three or four grand for a modern miracle of carbon fiber technology that'll be clogging a landfill while this thing is still reasonable transportation. I know, some people have a need to go as fast as they possibly can. Most don't. It's like driving a Porsche when you could have a fully-restored Bugatti roadster for one-third the price, on the grounds that the Porsche's radio is better.

WHICH reminds me that I've been having a long email discussion with Brendan, which is to say he's taken my regular novella submissions with good humor, beginning (I think) with the topic of What Sort of Milieu Did David Weigel Grow Up In That He Can Now Imagine Himself as Some Sort of Moderate? I've been trying to work it into some sort of post, but thus far it resists being turned into less than five, and that's five Riley-length posts. Call it "A History of the Overton Window, 1961-present, and Why People Like Dave Weigel Can't Figure Out They're Actually Staring at a Brick Wall". Coming Summer, 2012.

More gist arrived at the mill yesterday, in the form of "Who Would The Public Blame For A Government Shutdown?" polls; the first one I saw, on teevee somewheres, tried to say the blame would be equally divided which, I thought, proved they'd done an excellent job of carefully dividing the poll.

The Times today (I'm not linking to them anymore until I'm assured that clicking links don't cost you any Gray Lady ViewPoints™, which, since I'm never going to research the question, is never gonna happen) put it a tad differently:

Poll: Blame for a Government Shutdown Will Get Spread Around

As the nation inches closer to the possibility that the government may shut down tomorrow at midnight, the public is divided in apportioning blame for the situation, according to a new NBC News/Wall Street Journal poll.

So if you add "Congressional Democrats" and "President Obama" you get 40 percent, or roughly the equal of 37.

And while such polls are generally corrected for party bias, more or less, depending on the result desired, you can't really correct for Total Motherfucking Delusionality, not if you still want to conduct a poll in the United States.

Don't get me wrong; I'm not saying that the 20% who would blame the President don't know what th' fuck they're talking about, because that much is so obvious I don't have to say it. You could lump them in with the "Democrats" responders and still have roughly the same results, except you'd know that at least half of them are answering the question as if they were being asked to express a preference for a sports team. I'm not trying to say that the President has no place in the game, nor that Democrats are in no way responsible--they're both responsible for, if nothing else, the continued existence of these maniacs on the national stage--you can follow Brendan's link to Josh Marshall quoting a Hardball Democrat's discussion of Ryan's "courageous" plan--and it's certain that I don't expect the public to be accurate in its assessment, nor do I care one way or the other. I'd rather ask why this qualifies as news for anyone outside the Beltway? "Partisan Poll Shows Partisanship".

Y'know, maybe we should wait to ask until there's an actual shutdown, when the action centers squarely on the House, and its Republican Inmate-Operators. Like maybe when "Government Shutdown" isn't a news graphic, but the reason Grandma didn't get her catfood money and Shane Lee missed his combat pay. I, at least, don't give a shit which side the American people blame this on; the American people put that goddam set of corporate grifters back in charge in the first place, and the American public can't be bothered to figure out what's a stake until the roof caves in on 'em. Ninety-four percent of the American public answered your stupid poll question with something other than "Fuck off." I'm not sure it can get any worse than that.

That reminds me, my old Peugeot I bought with my Washington Star paper route money is languishing in a closet no more than 30 feet from this keyboard.

No original wheels though, they were liberated from the otherwise locked up bike while I was playing in a chess tournament in Kensington or some some such.
~

Afte looking at the photo of your bike I have just one questio: Just how tall are you anyway?

"...the previous owner scratched his Social Security number on the thing as a theft deterrent..."

This seems like a profound observation on the American People's notions regarding "security" back in the 70's, and Today. But I can't think of a appropriate bon mot

Nice bike - enjoy! If it shuts down, I blame the Republicans.

Thanks a lot for reminding me that I fucked up when I saved a hundred or two bucks back in 1979 by buying a mediocre Japanese bike instead of a Motobécane. Yeah, thanks a lot.

If you like going fast, and you have people of a certain temperament with whom you want to ride, and you have a shot at actually keeping up with them, there's definitely worse things in the world than to spend three or four grand on a new bike. That was me ten years ago (though back then it was only $2.3K). Not likely that I can justify another such purchase -- my carbon fiber wonder from ten years ago still ticks over pretty well, and in any case, my motor needs a little bit of work.

So much for the bike fawning, although I'm in that camp too.

I like the action shot of the asstards in expensive suits, careening (!) around a corner, on their way to something IMPORTANT!

And, yes, my unbridled use of italics and exclamation points can only mean: first day of golf is today!

Wow, Boehner's moving so fast, he's got to raise his arms for balance. Christ, as if there's anything more infantilizing than filing out of a conference room with your colleagues as though you've all just been shamefully released, again, from the principal's office at teh same time.

Among the many loathsome qualities of our political class, these are the misanthropic chair-warmers who think committee meetings are dynamic and cool.

I'll bet you quit writing letters to the Star a long time ago, didn't you?