It Is The Height Of Idiocy To Insult The Cook

THIS, via Early Onset of Night: 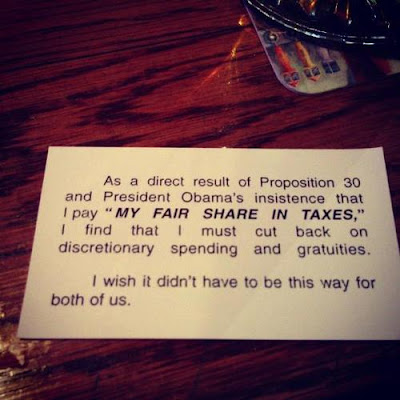 Okay, so, several things, and you're probably way ahead of me. First, this is the courage of the Typical Gaultian, beginning with Ayn "Medicare" Rand herself. Second, it's the typical intelligence of the Typical Gaultian (beginning loc.cit.), who imagines his solipsism trumps everyone else's. One wonders just how large a town this bozo lives in; he'd best travel, because no town is that large, and traveling might grant him an extra week before he needs to hire both a personal chef and a taster, like a good little Jobs Creator.

Look, Dick--if I may call you Dick--in the first place the person you're ultimately fucking is the Randian superman who owns the joint, and who gets to pay (in most locations) half the minimum wage to tipped employees, one of whom now gets to pay taxes on 8% of your sale despite making nothing, thanks to your principles. If the server can show that he or she did not make the difference in tips the owner has to pony up. If you think this will spread--Rise!--keep it up (remember, a healthy adult can generally ward off even a large E. coli infestation) and see how long it takes a class of people already on the lookout for bums and cheapskates to ID you, and all your pals. Sad, but true, there are many more of them than there are Morally Superior Men such as yourself. Believe me, it'll take about three of these before the people you think you're screwing start keeping records that the Gestapo would envy.

Anyone who's worked in a retail or restaurant establishment long enough--say, one afternoon--knows there are five-hundred ways to screw over a deserving customer without ever being suspected. Go on. Test the theory.

Me? When I turned 21 my intellectual mentor in college got me a waiter's job at the place where he worked supplementing his T.A. "income". It was a college town, and this was quite possibly the only white tablecloth establishment, aside from the ones the university ran. So it attracted a species of local maroon known as High Schoolers On Prom Night. I was warned ahead of time.

The place did tableside service: Caesar salad, cherries jubilee, that sorta thing. Waiters were busy. The local agriculture progeny were unfamiliar with a food establishment where the food didn't wait on you.

In truth, I did not really have the personality necessary for a successful career in haute cuisine. I was the new guy. I got the shittiest stations. Usually including tables by the kitchen door, which were the least desirable from the customer's viewpoint. So I'd get loaded down with children, and I couldn't detour around the tables because I had to go through the kitchen.

Prime Prom Time. I get a four top. Two couples, whose formal wear had be applied with a pitchfork. They were okay to begin with, but something went wrong, or something. I don't honestly remember. They started demanding their food every time I walked by, which was every time, and grabbing my sleeve to speed it along. Then they hit on the plan of ordering refills for their unspeakable Nehis, or whatever it was, one at a time. Ha ha ha!

I took it for about ten minutes. Then I stopped at the table on my way back to the kitchen.

"I'm very sorry that we got off on the wrong foot here somehow, and I want you to know that I do hope it won't spoil this wonderful night you have ahead of you. I would like to explain something to you. I'm going to go back into the kitchen now and check on your entrees. If they're ready, just like the salads you just ate, and the drinks you've been consuming, I'm going to pick them up, put them on a tray, and carry them out to you. Most of this is going to occur behind that door, where you don't see it. I just wanted to make sure everybody understood one another."

I swear to God, before I was finished both of the girls were the color of winter lawns. Their food was up, I delivered it pronto, and never heard another peep out of any of them.

Left a 10% tip, too, which, for high schoolers, was Diamond Jim Brady territory.

Labels: You Gonna Eat That?
Email ThisBlogThis!Share to TwitterShare to FacebookShare to Pinterest

Riley, please tell me somebody REALLY didn't leave that. It's so over the top childish, self centered, misguided, need I go on? I guess what I don't understand is how are people going to buy cars, homes, college educations, etc. when there is this relentless drive to strip people of any semblance of humanity and pride so that some people who already have money can have so much more? Whatever.

I was shocked and sickened to learn that waiters are paid less because of tips. I mean WTH? How can anyone ever get ahead, or even even with... anything with such a system? Sickening.

I used to work at Winchell's Donut House... ish. The worst revenge I ever took was to squeeze a jelly donut placed in the top of the bag of donuts. But I heard stories... my favorite was the jelly-donut throwing gal. Chased a customer from the store hurling donuts at him. My, I'd have loved to see that.

Yes. Waitstaff get paid less than minimum wage to stock and clean the owner's restaurant and sell food.

There's a busload of eleven year-old hockey players and the irresponsible adult who made them memorable that I have mentally kicked the shit out of.

I'm a coupla standard deviations below the top 1% but even I tip generously fer gawd's sake. What a self centered dick. I hope someone drops heartworm eggs into his food.

My mom was a waitress, so I knew better. I stayed on the other side of that kitchen door. So I got full minimum wage.

Which made the cook (owner's son) believe that because I was not getting dinged on my salary, that made me available to wash his goddam car. Uh, no it didn't, I said.

So, of course, I did not receive a raise and promotion when it was available, even though I had seniority.

Something about biting the hand that feeds you?

Snarky O'Reilly "did not really have the personality necessary for a successful career in haute cuisine."

No kidding! Go figure. As they say, LOL.

Whoever said "the customer is always right" never had to deal with them.

You can tell who's worked with customers before, that person is usually a good tipper.

Yes, Anonymous, people do leave notes like that. Our favorite wairess at the local IHope is black and a few days after the recent federal election she received a note on the bill that Obamacare was her tip.
Typical Randian will certainly take advantage of ACA when he needs it.

If this guys taxes just went up under prop 30 he is making $250k a year. Yeah I can totally understand him dicking a waitress out of 3 bucks..

Someone defined a conservative as someone who is constantly looking for excuses not to donate to charity.

Hmmmmm...I hope the next time he orders food he gets a ground seasoned meal, as in whoops... dropped that on the ground...whoops took a couple minutes to pick it up....whoops...it happened in the bnathroom of all places.