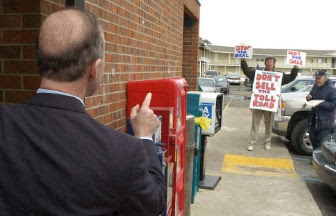 
Emails obtained by The Associated Press through a Freedom of Information Act request show Daniels requested that historian and anti-war activist Howard Zinn's writings be banned from classrooms and asked for a "cleanup" of college courses. In another exchange, the Republican talks about cutting funding for a program run by a local university professor who was one of his sharpest critics.


The emails are here and here. In case you’re blissfully unaware of Indiana politics, “Tony Bennett” was Daniels’ education henchman, and such an egregious turd he lost his bid for reelection in a Republican year in Indiana.

Now, at the risk of shocking some readers, I’m not completely surprised to learn that Mitch Daniels was a petty tyrant, an intellectual lightweight, a Bill of Rights hypocrite, nor a vindictive runt. I’m sure he comes off a little worse simply because the A.P. was not able to obtain his detailed supplemental list of the errors “on every page” of A People’s History.

I would just like to take a moment this AM to point out a couple things. First, Daniels refers to Zinn “finally” passing away; apart from the standard display of Daniels’ class and wit, it suggests that his familiarity with Zinn had begun less than a week earlier, with Roger Kimball’s piece in the National Review. Daniels even appropriates Kimball’s “textbook of choice in high schools and colleges across the country” line, a classic example of how anti-fluoridationist hyperbole becomes established fact the moment it reaches a pair of ears.

(I will admit, under the circumstances, that I frankly admire Daniels’ ability to get through the thing in just six days, while taking notes, seeing how occupied he was at the time with paying for someone else’s coal gasification plant, half-completing I-69, and finding reasons to avoid testifying in the FSSA suits and countersuits.)

The salient point, though, is Daniels’ reaction when a series of emails detailing efforts to get the recently discovered and deceased Zinn out of the education curriculum at state universities: he insisted he was talking about K-12 only.

Anybody ever read a standard K-12 history book in this country? Dear God, they’ve been watered-down Chamber of Commerce pamphlets since Mitch Daniels was knee high to…I mean, since he was a lad. The introduction of Howard Zinn to Indiana classrooms (Daniels’ hench-emailers found nary a copy) would improve the teaching of history no matter what you think of what he says. Hell, Howard Stern would improve our secondary History curriculum.

This isn’t about free speech, or Daniels’ Randian dedication to it, though that’s plenty enough for starters. It’s about the Nixonian dishonesty at the heart of education “reform”. It’s about the wingnut echo chamber where even “reasonable” Republicans reside. It’s about the fact that you can somehow get an Ivy League education and not understand the concept of research.

On a personal note, once the quarter-stick-of-dynamite Freedom fireworks Daniels let into the state stopped blowing up last night, it got so quiet I thought I heard the Purdue faculty laughing its collective asses off. And the prolonged celebration of the Fourth reminded me that Howard Zinn "finally" died as a veteran of WWII. When it comes time to piss on Mitch Daniels' grave that, fortunately, won't be an issue.

Labels: Nixon's The One. Reagan's The Beard.
Email ThisBlogThis!Share to TwitterShare to FacebookShare to Pinterest

Mitch Daniels: smaller than he appears.
~

In this AP disclosure, you can FINALLY see what a mean and hateful person he really is. The local media behaved like sycophants until he only had about 6 months left in office and then they FINALLY started to seep out what he had railroaded through.

Throughout what is known as el-hi, aka grades 1-12, I found history of any kind a total bore. Later I learned that it wasn't history that was boring but the textbooks, disinfected and scrubbed clean by the godforsaken State of California. Only in college (that socialist den, pre-Reagan Berkeley) did I learn what really happened, e.g., unexpurgated accounts of U.S.reneges on treaties, armed takeovers and shooting sprees. Zinn came later, but Mark Twain's account of the Philippine "rebellion," for example, was memorable. Then the formidable Rebecca Solnit...

Mitch is writing a book about this: Zinn and the Art of Book Burning.

Yeah, A People's History was my third favorite high school textbook, right after Kapital and The 120 Days of Sodom.

Riley, Mitch loved to play the, "Aw shucks role" while he simultaneously sold everything that wasn't nailed down. But while I have your ear the Indiana Institute for Working Families has damning statistics such as the state's median family income dropped to $57,148 in 2011 from $78,599 in 2000, the second largest decrease in the nation. One in six Hoosiers is living on less than $11,000 a year. Now tell me, "How in the world are those people going to buy homes, cars, or even food????"

Bradley said...
This comment has been removed by the author.
12:54 AM EDT

1) Howard Zinn finally died as a World War II veteran and Mitch...protested the Vietnam War while also dealing drugs out of his Princeton dorm room where rich daddy saved his reputation and political future; and

2) I love how the AP got this story. Does anyone else think the AP was specifically searching for "Mitch hates liberals" emails? I can't wait until they find a jackpot o' crap of his regime. It's long overdue, but it'll still be pretty damn sweet to watch him twitch and bring out the claws the way he does when anyone has the temerity to ask him any questions beyond the scope of his "success" story as governor and now Purdue president.

Here's an interesting twist: at least part of the statement posted on the Purdue president's page was at first plagiarized, then purged. See here: http://academeblog.org/2013/07/19/the-historians-cited-by-mitch-daniels-denounce-him/ including the comments pointing to https://drive.google.com/folderview?id=0B-_vzxuVbPVvQ3hDcm9uMjg4X2s&usp=sharing

So it looks like in order to justify their efforts to protect Indiana schoolchildren from being exposed to "falsified history" the Daniels crew had to resort to .... falsifying history.

The latest most techologically advanced irony detector does not have a setting for this level.

Hey, NOBODY reads high school history textbooks. They're huge, 1200 or 1500 pages, and facing pages are divided up into all kinds of "special" sections like "People to remember". There is no coherent story, no continuity, nothing to put together. It's no wonder history is the most hated subject in school. By the way, I wonder what Daniels would think if he ever read a copy of "Lies My Teacher Told Me."

"The latest most techologically advanced irony detector does not have a setting for this level."

No, it doesn't, and that's a problem. While we all have an MDR for irony, the mega-doses we've been getting since Reagen can be dangerous. I've had so much I'm beginning to rust, which results, as I'm sure you know, in insomnia. The damned stuff never sleeps.


Nice post.Keep sharing. Thanks for sharing.