The War on Christmas in July 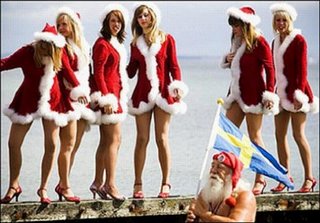 This must stop, or include me next time.

Well, the big Fouth of July Weekend is here, so called because every holiday must also include a weekend now.

Of course if there's anything I hate it's America, with its rich, fat, and noisy people, so the Fourth is my bête noir, with fat Americans so wealthy they can take entire weeks off just so their holidays include a weekend shooting off artillery rounds to celebrate a date not one in fifty can explain the significance of. This year in Indiana, as faithful readers will know, we have solved the embarrassment of historical illiteracy by the simple expedient of letting people set off fireworks whenever the fuck they please, which means I've been listening to the damn Henderson kids up the block blow shit up for the past five weeks. It's a practice when can best be savored only after 1AM, evidently.

Really, the only saving grace in all this is the fact that bête noir is French.

I was pondering Our American Traditions the other morning, sitting in front of Turner Classics with my mom. There was a Zazu Pitts/Thelma Todd two-reeler playing. They played vaudevillians ("Pitts and Todd") looking for a job. Zazu calls their agency. We see the pebbled glass door with something like "Goldberg, Goldman, Goldstein, and O'Brien, Theatrical Agents" on it. Cut back to Zazu as a voice on the phone says, "Goldberg, Goldman, Goldstein, and O'Brien. This is O'Brien speaking". At the last sentence we've cut to the other side of the connection, and the man speaking, who has an enormous hooked nose. O'Brien speaking. Har har har.

Normally overt racism in old movies rolls off my back, since I've been exposed to just about all of it, but this one took me back for a moment.

Later: Okay, Roy has shamed me, or would have it that were possible. Timely, too, as I was looking for a way to to slip a disclaimer in here, not to avoid hate mail, but what's worse, thoughtful responses based on misperception. I hate those almost as much as I hate disclaimers. So, some exaggeration for comic effect above. And I suppose it's both legitimate and timely to ask what I love about this country.

So we can start with freedom of the press and freedom of religion. For example: the way the human papillomavirus vaccine story played out on local teevee. Our free and neatly-coifed journalists (or, as Glenn would prefer, press operators) covered the story in a completely neutral and balanced fashion, managing to emphasize, over and over and over, the objections of religious extremists without ever once referencing the source of those complaints. "The federal advisory panel recommended vaccinating girls aged 11 and up, and, at the doctor's discretion, to girls as young as 9," [emphasis mine, to match the original tone of voice] ran the typical report. From the coverage you might have gotten the impression that this is the youngest suggested vaccination in the history of allopathy, rather than considerably later (and hence more problematic) than all the other vaccines we've been requiring since the Boer war.

The term "religious objections" never entered the stories. In fact, there was no discussion of objections at all, just the constant drumbeat of "as young as 9". Funny, too, since both local stations I saw doing this run the AP story on their websites, and the AP story begins "Taking up a potentially explosive issue among religious conservatives..."

So the locals got to report an informative health story--with a clear sensible, scientific understanding opposed by Bronze Age platitudinarians--as though they were purely on the side of science. And meanwhile they emphasized the religious complaints as though they had some meaning outside the moralizing. "Girls as young as 9 may be vaccinated!" Like, next stop, human cloning!

Overreaction on my part? Were they just performing the public service of alerting parents to the new vaccine and the recommended age requirements? No. It didn't play like that, for one, but the real kicker is that the other, real-world concerns, that the process requires three visits (something public health experts worry may be difficult with patients that old), and that it is incredibly expensive compared to other mandated vaccinations was never covered. Nobody asked any beholden-to-the-religious-right politicians about how the poor would pay for it, either. That's a QED from here.

What else? Oh, as I've been reminded since last month's hailstorm, America has the most punctual roofers in the world. 7AM, without fail. And they've all got cheap, loud, and reliable radios, and we lead the world in songs expressing a preference for the living conditions in Alabama, USA. Happy holiday weekend. Y'all.

My neighbors are doing the same thing in a parking lot overpacked with cars. I've got a migraine. If I had killer robot guard dogs with bees in their mouths so when they bark at you the bees fly out and sting you, I would turn them loose.

Just returned from participating in the early stages of the local celebration of da 4th. There will be some gianormous fireworks 'show' later in the day that is sure to reduce my poor cat to catatonia.

I participated with a group of local poets reading 'American' poetry. Unsure about how one defines such a thing, I chose to read and comment upon Emma Lazurus's The New Colossus. Certain elements in the surprisingly large audience seemed annoyed by this reminder of our national heritage. The boos were quite gratifing. To mollify them I then read and commented on Lanston Hughes' Freedom Plow. Again these same folks seemed nonplussed.

No appreciation of good poetry in certain quarters apparently.

Well, there's no pleasing some people, I guess.

Sorry about the anonomous posting. Senile blogging at its best..