What Is Robbing A Bank Compared To Founding A Bank? 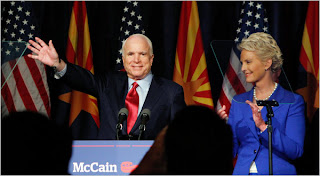 I'VE been forced to concentrate on personal business for a couple weeks, and in the odd moment when politics has crept back into my brain, waiting for a stoplight or a return phone call, it's been an experience similar to those Out-of-Body reports from people who die momentarily on the operating table: I'm floating up above things, looking down sorta half-disinterested. Just minus the bright light, organ music, and tap-dancing seraphim.

So, first, I'm skeptical about all this, same as I am about all that Near Death stuff. But, hey, even a momentary peaceful calm is nothing to toss aside lightly.

This country is nowhere near as certifiably pathological as it's being made out to be. Which is a far cry from saying it's no fucking crazier than it should be. Maybe it's just me…

The number of Americans who believe -- wrongly -- that President Obama is a Muslim has increased significantly since his inauguration and now accounts for nearly 20 percent of the nation's population.

but for some reason I think the fact that the Washington Post sees fit to report this is a helluva lot more disturbing than how many people supposedly believe it. Even with that wrongly. Maybe especially with it.

Because Who Th' Fuck Believes This? Not the fact that one in five of our--you should pardon the expression--fellow citizens believes it. They'll believe anything, a fact establish beyond refutation by the mid-19th century. Of the global supply of crackpot religious splinter groups, just to grab one example, how many did we invent? The world's largest goddam economy runs on that. No; who believes that in the last year 8% of Americans decided the President was a follower of Islam? Were they previously on the fence about it? Has a twelvemonth's rumination expanded the definition of Muslim for 24,560,524 Americans? Can this possibly make any sense to anyone? To anyone who can read?

Who's the bigger problem? I'd say it's the people who see to it such shit gets reported as though it were a fact to be confronted, or absorbed, and not some piece of shit oddity which belongs in the Ripley Museum between the two-headed cow and the life-size statue of Robert Wadlow, for the amusement of the perpetually slack-jawed.

Oh, it's news. It's a snapshot of a troubled country. It's an important indication of what sort of lunacy (which, naturally, isn't exactly reported as lunacy) is out there. Well, no, it ain't. Let's note, for starters, that you now have a notable congruence between the number of Americans who tell some guy on the phone they think Barack Obama is a Muslim, and the number of Americans who told some other guy on the phone--or maybe the same one--they thought Dick Cheney was the greatest Vice President of the United States since Nathan Bedford Forrest immediately after Disaster Dick mistook his hunting buddy for a penned bird.

No. At some point this has to occur to you. At some point you have to consider the consequences of your actions. If that consideration is bounded entirely by how this sort of shit improves ratings, or circulation, or ad revenues, then it's fucking time to start considering that:

Those results, from a new Pew Research Center survey, were drawn from interviews done before the president's comments about the construction of an Islamic cultural center near Ground Zero, and they suggest that there could be serious political danger for the White House as the debate continues.

Which is what? That at this rate, by 2012 48% of the electorate will think he's running on the Sharia ticket? Just tell me, exactly, what effect this is supposed to have? So the sort of person who believes some patent horseshit just because FOX tells him to isn't on your side, and this is a problem? What, are they deserting the Democratic party in droves over this? I Useta Be A New Dealer, But Since The Ground Zero Mosque I'm Outraged By Obama's Birth Certificate? Is the President required to try to talk some sense into each and every one, thus losing valuable stump time? How many times do we have to hear that sort of nonsense; how many times are we supposed to take The Right seriously just because it's found something else to yell about? Y'know, if you really have to take this shit seriously just because your boss tells you to, it's time to take stock of your expenses.

Wrongly! Thanks for that. Hope it helps you sleep. How 'bout "Pew Research Center Asks Specious Question, Finds Americans Are Badly-Informed, Pouty, Racist Second Graders"? How 'bout "Astonishingly, Only 18% Believe Obama Is a Muslim, Considering That 75% Say They Ask a Dead Jewish Carpenter Who Spoke Aramaic for Career and Relationship Advice"? Y'know, the President and the majority of Congressorganisms claim to be Democrats. They got there by winning elections, despite every insistence that all real Americans think they're Socialists. And it's true that the professional Dems, like professional journalists, fear to ford the shallows of the Mitch McConnell River of Stupid. And--how many times does this need be said, and by how many people?--th' fuck has this gotten us? The Teabagging enthusiasts can't win an election, not a fair one, without roiling the worst, lowest-common denominator, inarticulate rageswamps our backwoods have to offer, something which has resulted, historically, in disaster after disaster after disaster. They can't find a candidate who can string a complete sentence together, or one who, if he can, can couple noun and verb without a lie on either end. It's not just when they win an election and put their crackpot schemes into operation again that they'll be relevant; it's when they put together something approaching Sensibility. And if our newspapers and networks can't tell the difference then it's time to recall everyone's diploma.

OK -- you're wondering how Joe Miller, a lawyer who has never won an election, is currently leading Sen. Lisa Murkowski (R-Alaska) in a primary she seemed to have in the bag. Didn't Murkowksi have all of the money? Weren't Miller's rallies pretty listless affairs?

Know what, David? I'm not wondering. It's fucking Alaska. It's Frozen Texas, minus the culture. If I've ever wondered anything about Alaska politics it's "How come their Senators get to vote?"

Okay. Yes, the Gray Lady in the front row?

Mr. [sic] Murkowski has been in the Senate since 2002, when her father appointed her to the seat he had held since 1981 so that he could become Governor. She is battling for re-election in a political season in which another Senate incumbent, Arlen Specter of Pennsylvania, lost a primary after switching party affiliation to Democrat from Republican, setting off fears that a tide of anti-incumbency would spell doom for sitting lawmakers.

Well, I'm sorry, but who, exactly, is it who's been publishing those erroneous Tide Charts all year, if not the same people who now explain to me the Mystery of some Teabagger win in New Bumfuck?

Ah, yeah. That was what I needed. I can't tell you how refreshing I find your work, Mr. Riley. Historical perspective, Classical cynicism, acid-bellied curmudgeonliness (if that's a word). If you'd bother to sit down and write a book, you'd do pretty well. You've got a built-in fanbase. You could take Maek Sheild's job on PBS! Then you'd get to kick Bobo's ass on TV!

I think you're getting ahead of yourself by assuming that someone at WaPo actually makes a conscious decision to run shit that includes "setting off fears that a tide of anti-incumbency would spell doom for sitting lawmakers."
It's just the Culligan delivery guy fooling around with one of the newsroom desktops and hitting F4.

"It's fucking Alaska. It's Frozen Texas, minus the culture."

Hi-Larious. I'm stealing that one!

I believe that Teabagger win was in _East_ Bumfuck.

I'll forever thank TBogg for the "linky" thing that brought me here.

As a nation, we have most assuredly gone off the rails.

By the way, any news on West Bumfuck's primary results?

Brilliant, as ever, Mr. Riley.

There certainly wasn't anything elliptical in this commentary! As usual, excellent analysis. Thank you.

After being there and hanging with the locals, I started referring to Alaska as "Oklahoma with mountains", but "Frozen Texas, without the culture" is infinitely more accurate.

"It's fucking Alaska. It's Frozen Texas, minus the culture."

Sir, I'm afraid I'm going to have to rob this quote from you. It is a stroke of pure genius. :)