Extrapolations From The Obvious, Poured Appetizingly Over A Shingle 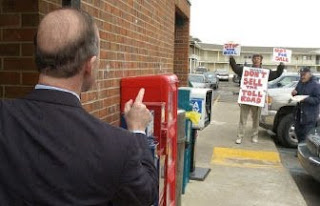 David Broder, "A tentative step toward the Oval Office by a GOP policy guru". October 17

FIRST, I hope you enjoy this as much as I did:

When she vanished, police questioned Condit, making the story even hotter.

Like the time they inadvertently demanded to know why police hadn't searched his apartment.

[I]n a party where a candidate such as Angle can be the nominee against the majority leader, brains are clearly a precious commodity. What we saw in Washington on Thursday night was a reminder that despite the occasional appearance, Republicans do not lack in that regard.

Back in Washington, the luxury of having a thoughtful presidential contender was striking for everyone hearing Daniels. The onetime Reagan White House political director and Bush White House budget chief is not your run-of-the-mill intellectual. His style is to be down-home, but his record of accomplishment is dazzling.

Okay, it's Broder; it's like getting upset because Tom Brokaw thinks George Patton won WWII. And it's America, where "intellectual" means "might not embarrass himself on Jeopardy!, provided they used dumbed-down celebrity questions". Still, where does this come from, and why's in it the air for Broder's corpse to latch on to? George Bush's nickname for Mitch? Got a favorite Daniels quote? Dean? Anybody? A Daniels article that changed your perception of the world? His five favorite books are Ayn Rand Action Comics, vols. 6-10. (He might as well said Jesus is his favorite philosopher, though the campaign's just getting started, folks.)

Let's leave aside the fact that "Libertarian intellectual" is a contradiction in terms; could we at least admit, in the spirit of toughening our educational standards across the board, that it's about as ridiculous as saying someone is a Traffic-flow intellectual, or a Cosmetics intellectual? Daniels has a pocketful of pre-packaged answers to everything, the way a pederast might have a pocketful of candy, but he certainly hasn't answered the major question, which is why those answers have led, over the past thirty years, to America becoming the world's most pitiful, impoverished Superpower.

[Incidentally, the Daniels Miracle has gone from Mantra, to Empty Mantra, to Meaningless Collection of Nonsense Syllables. Or make that "back to" meaningless nonsense; the state will soon begin paying interest and penalties on the $1.8 billion it's borrowed to cover unemployment benefits ("We're still better than Michigan!"), because it hasn't repaid the loan on time. $100 mil in interest, plus $21/worker in penalties, a penalty that doubles every year the loan goes unpaid. Candidate Daniels made hay out of the $200 million state budget "deficit" in 2004. Just for comparison's sake. (Actually, he made pork tenderloin sandwiches; he pounded the thing so thin it spread to $500 million, then $800 million, depending on who ordered it.) So Penny-Pinchin' Mitch seems to've been remarkably profligate with other people's money when it came time to preserve, or "preserve" the $billion surplus, or "$billion" "surplus" he was going to run for President on. Deadbeat Indiana is going to have to find $100 million next year to pay for Mitch Daniels' Presidential aspirations. Somebody alert Dean Broder.

And so it turns out that Daniels, like his idol St. Ronnie of the Shucks, has quadrupled the budget while claiming to fight it, the difference being that, so far as I recall, Reagan never tried to claim he'd miraculously shrunk the thing. But then Reagan was no intellectual.

And Daniels' answer to all this? The Next Republican Majority should forgive the debt, thereby increasing the Federal Deficit Which Threatens Our Very Way of Life. That's something. Not intellect, but something.]

The coveted "Mein Führer, I'm Too Vell-Fed To Valk!" Award.
[Incidentally, the Hudson Institute soaked up the government largess in the Hoosier state for twenty years, while all her citizens benefited from its particular brand of Bullshit Futurism as a Front for Corporate Rapine. This means I'm long since familiar with the legendary stories of Kahn's abiding affection for cabbies. It also means I've searched the streets for three decades trying to locate one he'd've fit in. Unsuccessfully.]

It was in every respect the opposite of the spectacle that came out of Nevada. There, Democrats and Republicans alike cringed as they watched their supposed champions mangle policy questions and personal exchanges in a fashion that would have been embarrassing for high school debaters. How did Nevada end up with two such inept candidates?

How? How? Say, just whose political reporting are you Dean of, anyway? How do we wind up with Sharon Angle vs. Harry Reid? Fuck, tell me how we ever wind up with anything even marginally better.

Tell me who eats this shit with a spoon, Dean, shingle and all, if not your profession? If not you. Who writes this sort of by-the-numbers dreck? The Daniels campaign is the desperation of a roomful of second-generation Nixonites and Reagan Privateers suddenly concerned, four decades later, about the roosting habits of the toothless inbreds they embraced for the sake of temporal political gain. How is it we miss that? And while we're feeling so intellectual an' all--again, I suppose it's a good thing that Irony died before she had to see the standard of Intellectualism! raised on the GOP barricades--maybe we could ask what these people have actually done for us in the sixty plus years since Nixon-Gahagan. Maybe we could ask how people with no morals got outflanked by people with no morals or brains, and why we should suppose that giving control back to the former would make a spit's worth of difference. Maybe we could ask why this den of thieves thinks fooling a Hoosier qualifies you for President.

I thought Newt Gingrich was the resident Pug intellectual. Glad to see the Conservative Brain Trust has doubled in size.

We need a Daniels sex scandal to surface, otherwise we're going to be stuck with this worthless POS in 2012. Lawd knows that showing the people charts, numbers, and graphs explaining the true character of the Daniels Fiscal Miracle will do squat. That's just one of the many benefits the rethugs have accrued since their more purposeful phase of civic destruction began.

No way he beats Obama. Still, his candidacy will do enough to crush the nascent "blue-ing" of Indiana.

What I want to know is hw gets credit for not raising taxes, when my taxes have gone up 3 times since he took over?

Ahh, you mentioned Mitch's little unemployment problem -- and guess what? It's actually quite a bit worse than he's willing to admit. He knows things are bad because he fired the three-months pregnant Commissioner Teresa Voors in May this year. The "Leadership Team" at DWD knows full well how bad things are, from how their "Modernization" program of the unemployment system is two years overdue (and now has another projected finish date of Spring next year), and is now $millions over budget.

Even worse, though, is DWD's complete and utter disregard for how the unemployment system works since Daniels took office. Last year was not a good year for the unemployment system, as can be seen on the Department of Labor's website: (http://workforcesecurity.doleta.gov/unemploy/bqc.asp). Indiana was estimated to have overpaid its claimants by some $626 MILLION, more than any other state/territory in the country. DWD was responsible for $497 MILLION of that amount!

When compiling data from 2006-2009, Indiana overpaid claimants over $1.157 BILLION (third most in the country after California and Illinois -- hey we beat Michigan!), and DWD was in some way responsible (or irresponsible) for $859 MILLION of that amount -- which was the most of any state by hundreds of millions of dollars).

Indiana businesses have to pay the bulk of these amounts of overpayments, although Hoosier taxpayers also pay a large chunk of these amounts, too. These amounts of overpayments refer to instances of claimants getting paid when they should not have been paid -- for not registering for employment services (a state law), not searching for work (a state law and federal mandate), not being able and available for work (a state and federal mandate), or any various numbers of other reasons. It is not hyperbole to say DWD runs the worst unemployment program in the entire country.

It is also not hyperbole to say Mitch Daniels is Mitch the Fiscal Fraud.

If you're going to ask the big questions, why not "How the fuck did Stalin end up running things?" These geezer authoritarian racists are walking down a tunnel and don't have a clue what that light at the end is all about.

I think that there is some sort of "family values" issue with Mitch Daniels' marriage. He's just managed to keep it covered up.