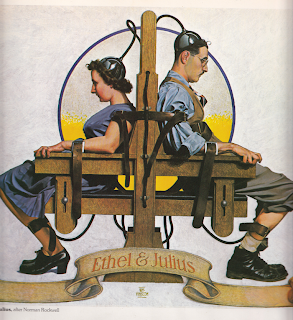 • Roy brought us such a collection of hopeless pseudo-historical sludge yesterday that I'm still wrapping my head around one sentence from one example ("Today we also know that Sacco & Vanzetti were guilty, as were the Rosenbergs and Alger Hiss.") which does have the benefit that I get to post W.T. Vinson's Ethel and Julius, after Norman Rockwell from the National Lampoon's Bicentennial Calendar. And thanks, Mom, for buying me the scanner.

I took some small pains in comments to explain that "we" don't know this, that in fact conventional wisdom now exonerates Vanzetti; recognizes that not only was there no case against Ethel Rosenberg, but that the government knew this and executed her anyway, ostensibly to protect the existence of the Venona Project, but more likely as a high-stakes game of Chicken with Julius, who refused to blink; that Hiss was convicted in the second of two perjury traps, on the testimony of an admitted perjurer, and his modern-day "guilt" is the product of some willful, and disputed, analysis of Venona. (In much the same way the "proof" of Sacco's guilt requires the bearer to simply ignore the rusted chain of evidence which, even if accepted, is equally suggestive of a police frame-up.)

This took enough time that I didn't bother considering Th' fuck this is supposed to prove, anyway? Sacco and Vanzetti were railroaded; that's as despicable with guilty suspects as with innocent. Ethel Rosenberg was electrocuted (took three attempts) for being married to a guy who might've been a Soviet courier. Hell, he shouldn't have been executed. The Hiss case wasn't about anything he'd actually done (and certainly not anything he was ever charged with) but "rescuing" the reputations of McCarthy and Nixon and other Cold War dipsomaniacs. Which were, and still are, tattered husks anyway. So people objected at the time. I'd object today, and still do; th' fuck's that got to do with Leftism? And I'd like to hear Ms Now I Too Am Outraged By Chappaquiddick defend the idea that Dalton Trumbo should have died in the joint for malicious screenplayery.

• We sat in agitated horror for ten minutes yesterday afternoon while Colts receiver Austin Collie lay motionless on the fucking field after a helmet-to-helmet hit. That is, we would have sat, and in silence, if CBS didn't continue, inexplicably, to employ one Phil Simms, onetime professional quarterback, now professional language butcher, as "Vanilla Jim" Nantz' color man on CBS's marquee game, meaning Colts fans get subjected to the sumbitch a half-dozen times a season.

Like I say, Collie is stretched out flat, surrounded by the medical staffs of both teams. He hasn't moved since he hit the ground. And Simms spends the entire ten minutes, less exhortations for Miller Lite and Cialis, essentially saying the whole thing was Collie's fault, that he'd had two steps with the ball and thus "become a runner" and had ample time to protect himself. The man's feet are sticking out of a crowd of medical personnel. Somewhere out there his wife, or his parents, or his pastor is listening to this millionaire hillbilly jabber away while Collie may lie paralyzed for life. Thank God he reportedly suffered only a concussion. But, y'know, yeah, there's some dispute about "taking the violence out of the game". And, yeah, the hit may've been something between a helmet launch he happened to get knocked into and One of Those Things. But that wasn't the time to debate it. (Hell, Simms was talking so much he flat out missed the official's call.)

Of course Simms wasn't gonna criticize the NFL (not directly), which diddled for years before deciding a few weeks ago to join the 21st century medical understanding of concussion. It's bad enough listening to people use a supposed technical understanding of the rules (which they don't really have, because the real rulebook is kept secret from everyone but the NFL brass and the officials themselves) to whine that their enjoyment of seeing a man paralyzed for life is being compromised. I hope the league will look closely and fairly at whether Coleman was illegally leading with his helmet or simply playing his position, assess penalties, if any, correctly, and explain itself clearly. But, without question, CBS should be fining Simms for conduct unbecoming a sentient being. Unless that's actually a loophole.

• Ross "You Still Here?" Douthat, inherent electoral superiority once again reestablished by The Base, gets to go back to pretending to blame The Base:

The modest Mr. Boehner leads a party with much to be modest about. Gingrich could brandish an agenda because he had an agenda — a raft of conservative policy proposals, on welfare and crime and taxes, that couldn’t get any traction in a Democratic-controlled Congress. Today’s Republicans, by contrast, know what they’re against (the health care bill, tax increases, cap and trade) but have a world of trouble saying what they might actually be for.

Anybody old enough to remember that Gingrich "agenda"? Any one still prescient enough to recall what, if any of it, rose above a litany of Things The Right Is Against, Or Was At That Moment? Slashing Welfare payments does not become a policy argument just because you say it'll cut illegitimate births among the coloreds. Tort "reform" which consists of making it tougher to sue negligent corporations is not a policy argument just because you think they've got better things to spend the money on. Boehner and McConnell don't have Newt's abilities as a peddler of patent horse liniment. This does not retroactively heal any nags.
Labels: Things I Say Just To Hear Myself Talk
Email ThisBlogThis!Share to TwitterShare to FacebookShare to Pinterest

An opportunity to air one of my grievances with right-wing revisionism, while borrowing from Joseph Heller!
Sir Norman Angell always never said that World War One was impossible.

Couldn't agree with you more on the Simms jabberthon... I didn't think the shot to Collie was dirty, just two or three defenders arriving at the same time as the receiver (and I'm in the club that thinks it's way past time to take the helmet to helmet launch shots out of football!) But Simms is one of those guys who can't stop talking because he might have to listen to someone else's voice, heaven forbid.
We get the Colts games whenever they don't conflict with our Titans down here in Nashville, mainly because of Peyton not proximity to Indy. The man could run for Governor here and walk into office.

I saw your comment at alicublog and was glad to see that tripe disposed.

Not to defend Simms, but they don't pay announcers to shut up. And you're exactly right about the NFL rulebook, but the talking heads say helmet leading contact is illegal this season.

p.s. I've won bar bets defying people to find the NFL (or NBA) rulebook online. Verizon and AT&T should give me a cut for all the airtime Blackberry's and iPhones used trying to prove me wrong.

It's the fucking rules! How can they not be published!?

"The man could run for Governor here and walk into office."

Well, he's dumb enough to be a Republican and rich enough to try, so watch out. Doesn't mean he's not a fine QB, just, in general, a dopey jock.

Riley, did you see the Politico story on a Cincinnati guy who set up a draft Mitch website? Tim is scared for America

Anybody old enough to remember that Gingrich "agenda"?

I am, I do! Funniest punchline of the time, emblematic of the gullibility of der volk and which still makes me giggle whenever I hear it: term limits. [cue laugh track]

And Ross Douthat continues to rival the Doughy Pantload for pulling crap out of his capacious rectum and transforming it into a newspaper column. I used to think the NY Times was a pretty good newspaper...years of Kristol and this jerk are making me change my mind.