That Sputnik Moment Was The Problem, Bub. 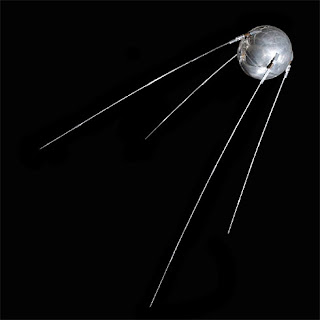 shown actual size
OKAY, so it's time to admit that it's Public Education which is the failure, that Our Schools are just the bedsores the thing has developed from the inattention of mean-spirited and sadistic family members drooling over the old girl's money, and move on. It's failed, clearly. Nice idea. Successful in its day, the way grandma musta looked hot in that neck-to-ankle swimsuit back before Radio. But fatally flawed. There's no money in Communism *, and Education seeks to make people smarter. People do not take kindly to this.

In fact, as we clearly see, people run screaming in the other direction. When I was a lad the Horoscope was a daily feature in the Indianapolis Anti-Fluoridationist. It was buried somewhere; it came with 19th century graphics, and you followed a number code to read your personalized message, which is what drew my seven-year-old self; I remember it taking about a year before I could read all twelve messages by looking at the pile of words, rather than following the code. It was a dumbshit amusement. This was in the day when computers were the size of a house, plate tectonics was scoffed at, and Velcro was for plants. Today, you may have noticed, astrology is fucking news. What's the point of education? At the twenty-minute mark of Monday night's NBC News With Brian Williams' Suit he read the story of Oprah's imaginary sister. Let's leave alone the woman's public relationship with Honesty over the years; Jesus Fucking Christ, if I wanted Oprah news I think I could find it. Lemme know when she cures cancer. Or books bin Laden.

Now, I'm not saying that the President's Sputnik reference wasn't a fairly slick political move, or what must've seemed like a slick political move, grading on a Slick Political Move scale, which is to say bullshit in pursuit of self-aggrandizement at the expense of your fellows. Let's hit Republicans right in the American Exceptionalism! Boy, that'll mean they have to adjust their Budget Cutting Rhetoric to reflect their easy platitudes!

Listen, if there are educated men out there who still believe that Pointing Out Their Total Fucking Cognitive Dissonance has any effect on the Republican party then there's simply no point in educating anyone.

The American government--hell, every American with a subscription to Popular Mechanics--knew that Sputnik was a gimmick. Same as we fucking knew twenty years later that the Soviets were bankrupt. Nobody let on, because panic is good for business. At least the Defense business.

This is the goddam fucking hell of it, Mr. President: we came out of WWII as the only major power whose hair was still in place. Global economic hegemony, aside from our erstwhile Allies the other side of the Dnieper. So, of course, we started a religious war with them--because otherwise our own religious paranoids would have voted Republican--and set about gobbling up all we could everywhere else, rather than establishing sustainable growth patterns. This is known as the genius of capitalism.

The program started cracking in the late 50s, about the time Sputnik launched. Death from Above! Nukes on the Moon! Our response, sir, was to use this to justify continuing "Defense" expenditures at WWII levels in perpetuity. This was back, of course, when you actually had to justify that sort of thing. Quaint, really.

What did we get out of it, besides Tang, a multi-billion-dollar Space War Agency with nowhere to go now, and massive debt? This is the problem, sir. The same way all those qualities you admire in Ronald Reagan are the problem. We can't go on peddling this shit to ourselves. We can't go on letting "does it make money for Congressmen and GE?" be a final arbiter. That's the goddam thing that has to stop. American Exceptionalism is the fucking reason America is no longer exceptional. I sympathize with your plight. No one realizes more than I that the fight was given up decades before you came around. But then, I didn't ask you to run for President. And this shit ain't helpin'.

Labels: Make That "With Lube". And Thanks For Asking.
Email ThisBlogThis!Share to TwitterShare to FacebookShare to Pinterest

I actually thought of "Tang" when he made that reference. Re your brief paragraph on cognitive dissonance--yep. I stand corrected, and have so stated on my blog. As usual, thanks for clarity, sir!

Is it okay with your Poor Wife if I propose to you? because that was fucking magnificent. I would pull bits for special joy, but then I might as well just quote the whole damned thing.

As to the SOTU, I got out of it what I always get out of these things, in the words of Scott Adams: Change is good. You go first.

As to the actual state of the actual union, I have to admit I have little hope for a nation of allegedly educated people who start using words like "shocked" and "disgusting" when it is revealed that their fast food taco meat is actually a blend of textured vegetable byproduct rather than mechanically reclaimed cow. It makes me wonder what the hell they thought *was* in their ninety nine cent taco, because personally, I'm sort of relieved.

I was driving to our clarinet sectional rehearsal and heard a few portions of the SOTU blah blah blah.
"We will win the future"?! What kind of stupid-ass crap is that?
The end is creeping nigh.

bjkeefe said...
This comment has been removed by the author.
12:00 AM EST

bjkeefe said...
This comment has been removed by the author.
12:02 AM EST

As much as I like Obama as a person (to the extent that I can tell) and as much as I still think that no matter how disappointing he is compared to what I dreamed about back in aught-eight, he is still way better than the alternatives, the early leaking of "Sputnik" theme compelled me to skip his SOTU address. And I say this as someone who watched every goddam excruciating minute of every one of W's, out of some twisted sense of civic responsibility.

Reaching for Sputnik is as lame as trying to regurgitate Kennedy's exhortation to go to the Moon.

For the record, though: I disagree to some extent with the sense here about the worth of either of those two efforts. I do not actually think they amounted to nothing more than Tang and making a few military-industrial-complex fat cats fatter. I think we got a lot out of the renewed emphasis on science education and I think we gave humans (and not just Americans) a nice jolt of reminder about what we are supposed to be all about by getting to the Moon.

Probably an argument for another day, but I wanted to lay down my marker.

Word verification on this third attempt to eliminate typos: proof

Well, it's about time to legalize polygamy, because if D. Sidhe marries Doghouse, who is married to the Poor Wife, I want to marry D. Sidhe for "It makes me wonder what the hell they thought *was* in their ninety nine cent taco, because personally, I'm sort of relieved."

The end is creeping nigh.