Friday Olio: Forty Years Of Worrying About Katie Graham Getting Her Tit Caught In A Wringer Doesn't Make You A Breast Cancer Awareness Pioneer Edition

Do tell. Why does the Librul Media always have to spoil everyone's good time? 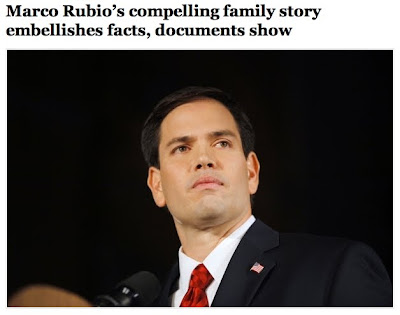 Do tell. Maybe this is just a question of style books, but, y'know, if someone said "Churchill planned the Gallipoli campaign as a response to the Armenian genocide" I'd call him "wrong", not "an embellisher".
Rubio's response, though--that he wasn't checking facts, he was merely writing a book--should cement him as a frontrunner in the Republican Veepstakes.

Now, a couple things, here: when, out of the 20% of Americans who have ever heard of Herman Cain, at least 10% of them are laughing at him at any one moment, "honeymoon" might not be le mot juste. I can't speak for what the "conservative" media is up to, but the fact that Herman Cain, jibbering dingbat, has been given unconditional, uncritical, and unreflective conjugal love from that quarter makes him different from any other certified wingnut how now?
Isn't the story that Cain, or any of that ilk, is cheered for stomping his oblivious way across a rhetorical minefield until that includes abortion (or tax increases, which amount to the same thing)? Cain hasn't exactly been hiding his lack of intellect or preparedness, has he? Not understanding math, or giving a shit about political geography, earned him applause. Maybe it's the honeymoon part y'all should be concerning yourselves with. I mean, there's a difference between a week of connubial bliss at the threshold of a life together and pretending to like Brenda Watson in fifth grade because she's stupid enough to climb a tree with no panties on.

Do tell. Leave it to Walter Isaacson to really blow the lid off the whole Steve Jobs mythos.
Every time I see something like this there's a brief moment when I wonder if the Chinese are at the bottom of a campaign to make all Americans just give up and wallow in whatever cultural shit they're being slopped with this week. Then I tell myself the Chinese are too smart to bother paying for something they can get for free.

Why didn't you ever say something? I thought you hadn't noticed.

It is utterly and completely beyond me how and/or why Rubin has a job typing words for people to read for which she receives money as compensation.