Olio: Forty-three People Camping Out At The Apple Store Was Ten Minutes Of Local News This Morning Edition

SO, let's turn to the Washington Post, and get serious:

Gee, maybe if you'd thought of that when the foundation of the movement handed you the keys to the Congress in 2006 and the White House two years later...

"Whether he has the breadth of knowledge a president needs"? He's running for the Republican presidential nomination. It's like asking whether Chris Christie has what it takes to provide shade.

Marco Rubio for Vice-President is officially the new Wait 'til Fred Dumbo Thompson Gets In the Race.
By the way, not that anyone could possibly care, but the requirements for Jennifer Rubin anointing you a Serious Foreign Policy Thinker are 1) public Likud fellatio; 2) making one of those America: the Globe's Force for Good speeches; and 3) questioning--for pure partisan profit--some slimy, realpolitik deal with authoritarian thugs, like an arms sale to Bahrain, say, which is the hallmark of American foreign policy as enacted by administrations from both parties in furtherance of that same America's Global Goodness you just wallowed in in a previous clause. Not to mention the fact that, as President Cain's foreign-policy stand-in, Vice-President Rubio will be the guy smiling and shaking hands with Crown Prince Salman bin Hamad bin Isa Al Khalifa when we unload a couple of surplus aircraft carriers in 2014. 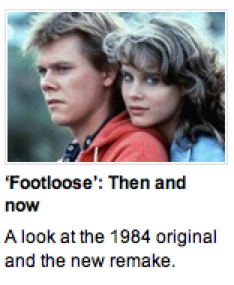 Y'know, I don't give a fuck, but incontinent childhood nostalgia, like any and all instances of childhood incontinence, should be cleaned up quietly, or referred to a specialist. People my age have been getting blasted, and deservedly so, for a lifelong tolerance of The Eagles; how much longer are people going to listen to you wax poetic about the early days of Doom before they take to pushing you and your Hoveround down the steps while cackling like Richard Widmark?
And here's another thing: now once something gets remade it automatically, thanks to cable teevee/studio distribution deals, becomes the Official Version. This did not used to be the case. King Kong meant King Kong for fifty years, meant Fay Wray, not Jessica Lange, not whatever Jessica then replaced Jessica Lange, and excuse me for not giving enough of a shit to look that up. If I see 3:10 to Yuma or The Manchurian Candidate on a teevee listing, and it's not Turner Classics, what's showing isn't the definitive film of that title but something someone designed to make money off it with minimal effort. Fie! Now if you'll excuse me, I wanna go see if there're any new iPhones left.
Labels: English. It Makes A Poor Cudgel.
Email ThisBlogThis!Share to TwitterShare to FacebookShare to Pinterest

Camping out? In Indianapolis? Are there no cops with kettling nets? Are there no white-shirted supervisors with limber batting swings and an abundance of fast-twitch muscles in their mace-triggering fingers? These hippies and their rallying cry of "We are the OS 5%!" must be returned to their proper stratum.

"People my age have been getting blasted, and deservedly so, for a lifelong tolerance of The Eagles.."

I must claim sanctuary on this issue being a member of the not-so-great generation: me and The Dude have never fallen into the Eagles rat hole.

Chris Christie as Bumbershoot? I learn something new every time I drop in.

Good thing I wasn't drinking coffee or this here would be one of those Internet tropes about needing a new keyboard and/or pants.

I should only live so long to see the nostalgia wrought by the remake of Knocked Up or the No Strings Attached/Friends with Benefits twins. Of course, I'd be incontinent myself by then and it won't be the nostalgia leaking.