“The Saddest Words Of Tongue Or Pen: Mitch Daniels’ First SOTU That Might've Been.” 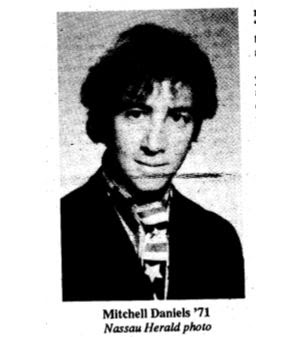 
Accepting Daniels as a budgetary whiz required you to drink enough Sterno to forget that he had been the Budget Director for George W. Bush, which was like running the soda fountain at Jonestown.


To which we would add only that imagining Daniels' record in Indiana is much of an improvement requires a good slug o' napalm n' lime as well, beginning with the "deficit" he supposedly inherited, and ending, well, once all the bills are in for that gasification plant, the half-completed, wholly unneeded I-69 extension, and the bills for suing and being countersued by IBM over the Family and Social Services Administration boondoggle. Plus whatever else has faded from memory. Leave us note here that Indiana received a $3.8 billion lump sum payment when Daniels slicked the consortium that bought the Chicago Skyway into leasing, for the next seventy-five years, the only access to their property from the east. That's roughly 15% of the state's annual budget. Daniels spent it all; I think I must'a slept through that part of the presentation back in '05. (Though I do remember that a year later the Daniels PR machine was griping about how the "unexpectedly poor bond market" was forcing them to downsize the anticipated Asphalt Miracle they'd promised.)

As it turned out, that Miracle consisted of using 6.8 decades of other people's ("Our Children, and Their Children") money to puff up Mitch Daniels' economic record, in hopes of erasing Mitch Daniels' existing economic record. Throw in the $8.8 billion in Federal stimulus money he objected to in "principle" but took anyway, and the $2 billion and counting owed the Feds over his mismanagement of unemployment, and Mitch Daniels actually got to spend nine years of state revenue in eight. A cynic might begin to wonder what drawer that $2 billion surplus he left us is actually in.

The current Indiana General Assembly is hard at work 1) trying to divine Mike Pence's divine intentions, and 2) trying to come up with a different name for a tax increase so we can maintain the roads we already gots, let alone finish the work the Daniels administration so nobly half-advanced. My own suggestion ("Sue Mitch Daniels for the $200 million the next four years should have to spend, even if that Toll Road money never earned a dime in interest") seems to've fallen on deaf ears. If he's not good for it personally, I'm sure Purdue's got some stuff he could auction off.

I'm not gonna forget Mitch Daniels; hell, I'm the only guy in Indiana still trying to get Kindly Doc Bowen (1973-1981) thrown in the hoosegow. Even if I wanted to, the Indianapolis Star seems convinced the man is still politically relevant. Or else it's just nostalgic for his patented brand of Non-Answer; regardless, the sumbitch is still getting more column inches than Pence (who, in fairness, may be getting hard to spot, as he appears to be getting more and more translucent, but maybe that was just the approach of Lent). Last week they sent someone around to get Daniels' thoughts on the legislature's seeming determination to Get th' Fuck Out From Under the Detritus of the Daniels Administration Before Anyone Notices, and he replied something about how different political circumstances may call for different approaches. Some True Believer. My response, shown of swears, is that if the Bible requires a Constitutional Amendment ("When we get around to it") to protect the Imaginary Heterosex Monogamy it commands, how much more do we need one to protect against false witness, which really is in there?

Besides, who can escape memories, without an assist from Nature, whether welcome or not? I was delivering some food to my dad the other day, and, as usual, the teevee was blaring news. It wasn't FOX, for once; maybe he switches to the locals at noon. And the hot-button story was the Indianapolis Motor Speedway ("Home of the 500") asking the state for $5 million a year to help with improvements.

"I can't believe they're doing that!" he shouted. (Not in anger, just in hard-of-hearingness.)

"Dad, we spent three-quarters of a billion in taxpayer money on that football barn. That caused the Simons to demand, and get, an extra $10 million a year so they can afford to keep the stadium we built them swept. Where do you think they got the idea?" I shouted back, mostly because "shout" is the preferred volume for our political discussions.

For sixty-five years it was the stated position of the Hulman family that it wouldn't ask the state for money. Which is being held against them now, in some quarters--mostly those same quarters which were happy to build stadia for privately-owned sports franchises, and rebate taxes for ten years for businesses which promised to move into the state while Mitch Daniels needed vapor job numbers.

Where d'ya think they got the idea? Not from Mitch Daniels personally, but, then, Daniels did have to run around to the front of the parade when the Republican-Democrat mayor of Indianapolis--and Daniels' chief rival for the 2008 elections--asked the legislature for small-scale local casino gambling to pay for the deal he'd already worked out with the Colts. The Daniels-controlled legislature upheld the Biblical principle ("Thou shalt not sport over cards, or other games of chance, except on something that looks like a boat, or a dog track, until Republicans need those funds for their own purposes."), as well as their own, and got the doughnut counties to saddle themselves with a tax as well. With Daniels in charge, and Mayor Bart Petersmythe safely seated below the salt, the state managed to bring in the project only $100 mil or so over the (revised) estimates of $650 million.

Only problem was that, under Peterson's plan, the deal included a $50 million emergency operating fund. Just after the state inked the deal it was discovered that that money had been misplaced, somehow. Then it rained, the place leaked, and lost about 1/3 of its electrical system. No problem, though. The taxpayers were good for it.

Yeah, I won't pretend I'd'a wanted to see a Mitch Daniels SOTU, though it might've been amusing to see him try some of that Big Brain execufyin' without the legislature and press in his pocket for once. Same as it would have been entertaining to watch him take the beating Mitt Romney got instead, or to hear him duke it out onstage with Newt and Santorum. I don't believe the man really thought about running for President, just about refilling his campaign coffers after buying all the airtime in Indiana for the first ten months of 2008.

Besides, what's in a name? "Lucas Oil Canyon" would be just as Grand, wouldn't it?

Labels: Short Takes on the Daniels Legacy
Email ThisBlogThis!Share to TwitterShare to FacebookShare to Pinterest

I was glad to see Charlie Pierce take some notice of the Value-Sized Disaster-Guv. As a citizen residing along the Great Foreign-Owned Way (formerly Indiana Toll Road), I've always known Mitch is not great with numbers. I suggested the first year Mitch ran for governor that the dems give out bumper stickers with Mitch's logo on it and three words: Bush's Budget Director. Opportunity lost.

...it might've been amusing to see him try some of that Big Brain execufyin' without the legislature and press in his pocket for once.

That would have to be a mighty small legislature and press, then. Amirite?

Could someone define the difference between legal corruption and illegal corruption? Some in the media (won't say who) imply that Troy Woodruff's family making out like bandits was wrong but so many of the other behind the scenes deals all during the period from 2004-2012 were just ignored. Plus, the general assembly was downright terrified of their boss (won't say who again) and was consequently basically a rubber stamp.

By the way, where did you get that picture? Hilarious. And I love Charlie Pierce too.

Did I mention what a great picture that is.