The Plural of "Imaginary Anecdote" Is "Op-Ed Piece" 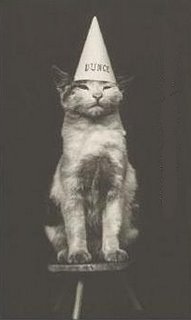 Yes, it's time for another round of America's Favorite Parlor Amusement, "If We Captured a Terrorist and Had Only Thirty Minutes To Find Out Where He'd Hidden a Nuclear Device, and the Only Way To Get That Information Was To Let Him Sodomize Nick Kristof on Coast-to-Coast Television, Would You..."

Otherwise known as "Gee, I Could Get To Work So Much Faster if I Didn't Have To Stop for All These Red Lights."

Suppose Colin Powell tires of giving $100,000-a-pop speeches and wants to teach high school social studies. Suppose Meryl Streep has a hankering to teach drama. Alas, they would be "unqualified" for a public school. Elite private schools would snap them up, of course, but public schools that are begging for teachers would have to turn them away because they don't have teacher certification. That's an absurd snarl in our education bureaucracy. Let's relax the barriers so people can enter teaching more easily, either right out of college or later as a midcareer switch. Sure, there are lots of other problems in the U.S. education system. But this is one of the easiest to solve.

And one of the most difficult to solve is the Armchair Quarterback problem. Everybody who went to high school in this country seems to think he could run them. All of them.

I don't know about New York, but in Indiana, which has one of the stricter codes in the country (teachers are not supposed to teach outside their areas of accreditation, for example), Colin and Meryl (she's married to a Westside boy, btw, Steve Gummer) would be welcome to apply for teaching jobs. They could get provisional licenses for a year, after which they'd have to work on gaining full accreditation, and they'd have to comply with the new NCLB-era requirements.

And, of course, like many another punditological magic solution, this one's uniformed (you'd think Kristof, who can galavant around the globe for a story, could have dropped in on at least one public school and checked his facts, huh?). Public school teachers do a hell of a lot more than teach a particular subject.

Let's ask what we might want a public school teacher to do besides teaching a specialty. Identify learning, developmental, and emotional disabilities? Monitor medications? Integrate students with learning disabilities into regular classes? Watch for signs of sexual and physical abuse? Mediate a wide-range of interpersonal problems among young people with varying ethnic, socio-economic, and religious backgrounds? Deal with physical altercations and anger management among hormonally-crazed adolescents? Get to know students and their families, alerting social workers and social service organizations about potential problems? Make college recommendations and give career-path advice to dozens of young people each year?

Meryl Streep been picking this stuff up in her trailer between takes?

One reason to act is that the U.S. faces a growing shortage of teachers. Just to keep student-teacher ratios where they are now, we need a 35 percent increase in the number of people entering teaching.

The other problem is that the quality of teachers is deteriorating, mostly because -- fortunately! -- women have more career options. A smart and ambitious woman graduating from college in 1970 often ended up as a third-grade teacher; today, she ends up as a surgeon or senator.

Huh, well, she doesn't actually start off as a senator, does she? As an entry-level senator? There are presently 14 female Senators and 67 representatives. I can't find any statistics for it, but I'm pretty sure there are more than 81 intelligent women in the United States, and the remainder of them aren't all surgeons.

The upshot is that between 1971 and 1974, 24 percent of teachers had scored in the top 10 percent on their high school achievement tests. Now only 11 percent have done so. So one study after another has concluded that it is time to relax teacher certification requirements. "Barriers to entry are too high," declared last month's final report of the Teaching Commission, a private blue-ribbon panel led by Louis Gerstner, the former I.B.M. chief. "Confusing and cumbersome procedures discourage many talented would-be teachers from entering the classroom."

Oh, good, some more advice on how to run America's classrooms from a retired CEO. You'd think with all the free advice these guys have been offering for the last thirty years we'd be out of the woods by now. Then again, if he's so smart, how come Gerstner's best move at IBM was dumping $40 million of the stock he'd artificially inflated before he retired?

Well, let's pick through the horseshit and sort out the weed seeds. I don't know whether the supposed tumble of achievement test scores is real or not. Lots more people take those tests than in 1970 (and it's unclear whether those numbers compare teachers entering the profession in the early '70s with today, or if that's a comparison of the entire teaching force). A lot more people go to college these days, and many more professions require higher education. By 1970 my dad (high school education) was the only person at his company doing his job who didn't have a Masters. Second, I'm not sure what relaxing teacher certification requirements is supposed to do to increase average achievement test scores, whatever the point of that is. If someone wants to teach (trust me on this, it's a calling, not a calculated ladder-climbing career choice) why not get an education degree? Or assuming they decide after graduation to pursue education instead of their major field of study, what's the problem with getting additional credit hours? There's lots of grant money out there, and tax breaks to ease the financial strain. Not to mention the fact that most states require teachers to continue their education anyway, a cumbersome requirement which seems to make good sense. If you're called to educate our young, why wouldn't you want to learn as much as you can about the process, as well as stay current?

So, would this be a good time to point out that not all public school teachers are women?

Or that this period we're discussing corresponds to the Yuppification of America? That between 1974 and 2006 we went from a society which valued knowledge to one which exalts in net wealth?

Have Bill Gates, Jack Welch, or Louis Gerstner applied for public school teaching positions, or are they content to use charitable foundations as megaphones? We don't let the B-schools run our universities, public or private. The disproportionate influence these people have over public education is one of the major causes of our current test-happy, math and language to the exclusion of all else public school environment, something which is short-changing public education and is going to explode on us in short order. A C-minus legacy idiot with a business degree is in the White House (that's workin' out well), and a public school student with a lick of smarts must realize that they same foundation chairmen who're fucking with his curriculum requirements every couple years are shipping jobs overseas. Maybe the first thing we need to do to improve education is to take the bullhorn out of the hands of Times Op-Ed writers who think they can lie about it with impunity.

I can't stand to read Kristof any more.

Is he really saying that if we lower the standards for teaching we'll get a better quality of teacher?

Not only the best title of the year so far, but some of the most cogent commentary as well. What does it say that some unknown, pseudonymous polymath from, if not the boondocks, the access road to the boondocks, relatively speaking, consistently skewers the titans of the NYT OP-ED page like they're chunks of veggies and he's the Iron Chef? It tells me I'm glad I'm not paying $50/year just to cause my diastolic pressure go up an equivalent number of points. Why does nobody believe in the concept of earned expertise anymore?

What the business school types (at least the B minus examples that seem to propagate these kind of arguments) seem congenitally unable to grasp is that there are several aspects of a functional society that shouldn't, indeed can't be run like a business.

They are taught, apparently, that business principles are universal and thus they try to apply them to everything. Some of our more extravagant disasters in the space program, for example, happen when business graduates are allowed to overrule the engineering team.

Okay, that's a long way to go just to be able to say that these guys aren't rocket scientists.

The second thing we have to do is to fund education to the point where a teacher's starting salary is commensurate with the responsibilities of the job (which are huge).

Yeah, I don't know as I'm quite so skeptical about running schools as businesses. At least to this extent: when I ran a business, one thing I realized (I'll bet all those fancy CEOs are aware of this, too) is that, if you can't get good people at the price you want to pay, then you're going to have to pay more. (That, or accept the not quite so good people you're willing to afford.)

It's wonderful to me how Kristoff can huff and blow for an entire column about how our educational system discourages quality teachers from entering the classroom and never once address the most obvious, not to mention the most business-like, available means of encouragement.