On the Feasability of a Unified Wingnut Theory, or, Jonah Goldberg Is Overweight 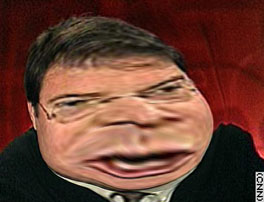 This Goldberg column means absolutely nothing to me and, although one should carefully consider before espousing universal truths where human behavior is concerned, I think we can say with absolute certainty that goes for the rest of the planet aside from Jonah and the 3.5 mouths that are keeping him from volunteering for combat duty. But Scott put the possibility of a Unified Wingnut Pundit Theory in my head last week so I checked the Goldberg archives this AM.

I'm not sure that Jonah is the linchpin of a potential global understanding of the phenomenon, but absent grant money and a squad of sweating co-ed volunteers one starts by looking for some nice loamy soil in which to dig. If we find some artifacts, not to mention some co-eds, somebody young and strong'll show up with a pickaxe before we hit bedrock.

So let's deal with today's nugget first: That's it, in the headline. No, really, it is: "Which Presidential candidate would you want to have a beer with?" And yes, any question of Goldberg authenticity is settled in situ:

• Opening with a lowbrow pop culture quotation which is then treated like some snippet of Montaigne (Men in Black; extra credit for vague sci-fi-y-ness).

• Disavowal of any responsibility for knowledge of, or accuracy in, the subject he is presently involved in writing about ("Please don’t be scandalized by all of this. It’s just something to think about. For the record, I think everyone should vote based on principle.").

Now, it is a fact that practically any major print pundit could have written such a column, mostly likely as a deadline-assisted tree-killer, possibly as a bunny-cautious bit of snark. It's even possible that other Jonah-Class pundits (most of whom are deployed to various career-ending outposts like Townhall) would similarly discover that, once again and by any reasonably objective standard they could imagine, it's the Republicans who are likable. But could any of them be this fucking unconvincing?

Interestingly, the GOP has a significant likability advantage (and disadvantages almost everywhere else). John McCain may be unpopular with much of the Republican base, but Americans would love to go to the pub with him. Rudy Giuliani, too, seems like a good guy with whom to watch a baseball game at the bar. The super-polished Mitt Romney’s a tougher call, and Duncan Hunter would be a pain because he’d keep asking the immigration status of the busboys.

Frankly, in some places I can name Duncan Hunter would spot Guiliani, motion the waiter over, and ask when they started letting in Jews.

But here's where we begin to analyze this pathetic pottery shard. McCain "may be unpopular with much of the Republican base," but he still passes the Beer Test. Okay then, what's the fookin' relevance of what the base thinks? The only possible answer is that Jonah has to feed the Anti-Fluoridationists at NRO or they'll steal his lunch sack. And what, exactly, is his insight based on? Can't be the polls: McCain's still in the race despite losing a big chunk of his "moderate" and "independent" support over the past eighteen months, presumably because Mr. Straight Talk has shown the consistency of Mr. Silly Putty™ over that period. But perhaps those people are teetotalers anyway, or perhaps what people like in a drinking buddy is shameless venality.

And Rudy, of course, has those qualities in spades, not to mention a few that would give you pause before hiring him as a guard dog or a strike breaker.

Okay, we already knew we had to account for outright fabrication in the face of readily-available public information to the contrary, and we knew (having snuck a peak or two before) that a Goldberg column was fertile ground for unearthing fragmentary evidence. But we must at present remain non-committed as to the cause of the reflexive knee bends over "the Republican base," and admit to no small amount of confusion over the use of the term to describe (one assumes) educationally-deprived Rapture enthusiasts and that segment of the population which finds Jeff Foxworthy "kinda funny, but a little too cerebral". This has indeed been a vital Republican voting bloc since the day Strom Thurmond switched parties, but hardly seems its historical "base", which is more Small Cap Hedge Fund than Small Engine Cylinder Decarbonizing. In fact we imagine that Jonah considers himself the Republican base, as do all those self-professed independent libertarians who still manage to toe every Republican line. And the weird exemption of Giuliani's own unpalatability to that same faction merits further consideration.

[Okay, a guess, but no wagering: it's not that Rudy is leading the polls, meaningless as that is, nor that he's the only candidate who leads Senator Clinton, let alone a Democrat who might actually become popular. I think the real answer is that Rudy's personal life and his abilitiy to weasel, opposed to McCain's public self-flagellation over his starting position on the Keating Five (however hypocritical), his personal valor, and his ham-handed acrobatics the past few months have convinced Republican tastemakers, if not kingmakers, that Rudy's venality is of the easily-controlled variety while McCain might one day, under serious pressure, do something because it was right. Plus, and this cannot be over-emphasized, McCain was stupid enough to head right in 2006 and beyond, when the GOP power structure was pissing itself over the Bronze Agers naming the next nominee. They don't want that shit enacted; they want to maintain it as a voting spur. It's possible that they've gone one bridge too far already, but they don't have much choice. Pandering to the right loses the next election. That McCain couldn't see that is evidence he's barely bright enough to be a Senator.]

But turn the thing over:

[T]he GOP front-runners (save perhaps Newt Gingrich) all have the advantage over Hillary. She may have star power, but you get the sense that most Americans would like to have their picture taken with her and then drink alone.

Here's a curiosity: Newt (10% and falling) and Mitt (8% and panicking) are "front runners", but the only Democrats Jonah can think of are Hillary and Chris Dodd. He seems to have left that Obama fella out, which is too bad. Not because I'm curious about his Beerability Quotent on the Goldberg scale. What I'd like to know is how many Cornerites would take a swig of beer from a glass Obama had already drunk from?

We're a long way from any serious hypothesizin', but I do recommend interested parties take a look at Jonah's NRO archive, which even in terse headlinese bears a remarkable similarity to an aerial shot of Wingnuttatopia as viewed from a hovering blimp.

Thank you for reading Jonah so that I don't have to. But can it really be true that he wrote an entire column on the beer-drinking appeal of presidential candidates and didn't even mention Obama? How is this possible? I hear Obama has like a gazillion MySpace friends or pals or whatever they're called, and that's got to be a solid indicator of sociability. Doesn't it?

The Beer thing again? Really? So Jonah believes the secret to recovering from the Team Wipe of 2006 and winning the White House in '07 is finding someone who's exactly like Bush? Gah. For all the gripes about Blue State condescension toward the South, it never seems to dawn on these aggrieved crackers that no one shows more routine contempt for their intelligence than the suckling pigs squirming 'round the teats of Richard Mellon Scaife.

You'd think the common clay of the Old West would get tired of trust fund babies from Georgetown deciding who does and does not speak authentic frontier gibberish. Because I'm fairly certain that if Jonah was down there, keeping it real with his peeps in the base, he wouldn't get a chance to finish one beer before the locals were putting their Pall Malls out in his long neck and turning the waistband of his underpants into a hoodie.

It's insufferable no matter what corner of the wingnut welfare state it comes from, but there's something particularly galling about a second generation rat-fucker like Jonah pulling on John McCain's dipstick to check the lager levels. It's like Vanilla Ice auditioning for Death Row Records. Or the opening credits of Green Acres, when Eddie Albert smugly pilots a tractor in a three piece suit. Or Jack Webb giving some As Seen On TV junkie a harsh, staccato dressing down in his native hippy patois.

Excellent post and comments. I was going to say something but now there's no point. On the topic of condescension, I'd just note, in case you haven't seen it, that the New York Times continues to degenerate into My Little Golden Book of Politics with unbelievably mindless crap like this.