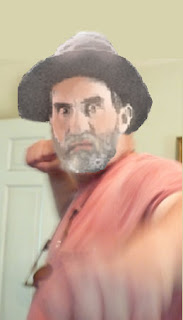 Considering the chasm between our relative positions, last week's discussion about the ethics of snapping a flash picture of your spouse from eighteen inches away when he doesn't know you've got the camera ended remarkably quickly.

MY Poor Wife had some minor surgery at the beginning of the week. Mole removal. (Her whole family's warty or gelatinous or something, plus they spent roughly 1954 through the Bicentennial in the sun; there's always something hanging off one or another of 'em. I fully expect to be told one day that PW is hopping a plane to Texas because Brother Dave is having a phantom twin removed. "He started biting," she'll say, or explain that David just couldn't stand the snoring anymore.)

Anyway, everything except the bill was benign, thank goodness, but she came home with five stitches and some oxycontin.

"They gave you hillbilly heroin?" I ask, somewhat incredulously.
"It's more like polyester heroin," says the PW.

I should mention here for the sake of her continued employment that this was made all the more amusing by the fact that if you asked her to pick the heroin on a multiple choice test reading:

She wouldn't be able to do it. She just hangs around in bad company.

(This reminds me. She'd gone to the doctor, and in addition to taking a few slices off her she gets her introduction to the somewhat specialist appeal of colonoscopy next month. And in trying to talk her into it her doctor said--seriously--"you'll get really good drugs". Amazing. These are the same people who locked up the really good drugs thirty years ago and tried to put everyone else on the wagon, and now they're holding them out the way they used to give kids lollypops after a round of vaccinations.)

I know I've mentioned The Game once or twice. I was actually reminded of The Game's origins this week; they're generally shrouded in fog. But I remembered for some reason that it grows out of something the critic John Simon wrote about his--if I recall correctly--high school classmate Julian Beck, who would amuse himself at a performance of Oklahoma!, say, by loudly proclaiming, "It's okay, but it's no Hamlet," and then doing precisely the opposite at Hamlet the next evening. I believe it's my longest-running tagline. The proper execution is to make the items being rated as rationally indistinguishable as possible. Watching The Girl Can't Help It, for example, one would say "Well, Jayne Mansfield's all right, but she's no Mamie Van Doren." Beck's original, saying Gielgud is no Keanu, is permissible but generally avoided.

The game was born out of this. I'd do the gag. The PW would respond, "And she's no Charles Van Doren." And from there you note that she's no Charles Evans Hughes, or no Mies van der Rohe, or no Dr. Joyce Brothers (obscurantist connections are permitted, up to a point, but anything showy is frowned on, mostly by her). This continues until one or the other is out of ideas. It gets pretty competitive at times.

At some point The Game branched into more linear competitions, naming actors named Robert or movies with "Clock" in the title, or somesuch. The most important rule of The Game, though, is that it has to arise spontaneously and organically. You cannot challenge the other person to a game of The Game. It must begin as if by accident.

My all-time favorite was the Earthtones competition, which probably started with James Brown, or morphed from Aretha, some soul-stirring evening, and traveled through Brown to Green to Amy Tan, Kate Moss, and Herb Shriner. It seemed to go on forever, until I won by pulling Rodney Peete from somewhere.

I hadn't really thought about it before, but I guess The Game usually involves the Arts in some broad sense, either because of its (forgotten) origins in The Theatre or because we watch too much teevee. And so it was when Gregory Peck movies suddenly took off on Tuesday afternoon. I'm not quite sure exactly how that started, although Peck came up because Bergman died, which caused me to pull out the Season One SCTV discs to find the Bergman parody Whispers of the Wolf, which led to John Candy (RIP) in The Babe Ruth Story, and Joe Flaherty's incredible Peter O'Toole impression, and then his Peck in the SCTV "Taxi Driver, the Series" ("You...talking...to me?") and somehow, a couple hours later, we were trying to top each other naming Peck films.

I rarely offer advice, except to people who I know won't take it, but there's this: there are few better things to base a marriage on than a good running gag. It's certainly not sex, which, I've come to realize with the passage of time, was just God's way of trying to get me to smoke cigarettes when I was young. Believe me, at some point, provided medical science doesn't kill you first, you will reach the point of prostate health where it feels like you're wearing a cock ring on the inside. Unless you aren't equipped with a prostate, in which case, as I understand it, the Court has ruled you're too unstable to be thinking about sex at all, unless your husband orders some. Forget tantra. Work on gags. That's what kept Gilligan's Island on the air all those years, not Ginger. Or Mary Ann. Or Alan Hale, Jr. if you'd rather. We're open-minded.

Anyway, we found ourselves playing Peck movies, and, frankly, we did poorly. To Kill a Mockingbird. Twelve O'Clock High. The Man in the Gray Flannel Suit. They came slowly; a hot day and a too-large lunch, maybe. I actually tried to bluff my way around Spellbound when I couldn't think of the title. The Game does not admit bluffing, but I did it with a smirk so the PW knew I wasn't trying it seriously, and it bought me enough time to come up with Mackenna's Gold (The Game, naturally enough, is gentlemanly; it's required that you express admiration when your opponent executes some fine shot piece of shot-making, but in this case she knew I just remembered Julie Newmar skinnydipping). Moby Dick came out, and MacArthur. We both knew we were leaving a whole range of things on the board that just wouldn't come to either of us. She got Roman Holiday. I got Cape Fear. She chips in Duel in the Sun.

And I couldn't resist repeating Scott C.'s line, for which there needs to be an internet monument somewhere, and which I'd already repeated to her once: "They crawl toward each other, gut-shot but still flirty..." And she started laughing until tears came into her eyes.

I've always been partial to "The Gunfighter," which offered strong proof that he really wasn't much of an actor and that I didn't really care. I just liked watching him and listening to that voice.

Does narration count? Peck narrated "Years of Thunder, Day of Drums" about Kennedy. I don't know if it was even released in America. I saw it in Germany in 1967. I think it was made by the USIA.

D'you ever take that hat off?

Exactly so. My entire relationship is based on a number of running gags, one of which is the cooking. Cats expand the potential for amusement, and spontaneous versions of Monty Python's Cheese Shop while in line at the market can be fun, too.

Someday, I have to say, I hope to run into the pair of you accidentally in some restaurant or something, just so I can listen in. Or, as long as I don't try to introduce myself, I suppose I can just pretend the other couples I overhear doing this sort of thing are you.

Just so you know, though, you can do all of this in a poly relationship, too. It can even be more fun, like most things--short of tiny elevators and life rafts--when you add another person.

Tell your Poor Wife I hope she's feeling better soon. I get a lot of prodding from doctors as well, and all Oxycontin gets me is a migraine to replace the clusters on the off chance it works at all. I assume Rush, lacking brain cells, did not suffer from headaches as a result of it.

OMG, I no longer know who I love more, you or your Poor Wife. Once again, you make me imagine that marriage can be something other than a bleak and dismal nightmare. I am so happy. I am so depressed. I'm her mother. She's my sister. She's my daughter and my sister. ::slappity slap::

I'm so glad I was able to contribute, in some small way, to the Domestic Tranquility. Feel free to name the next wart after me.

Just so you know, the New York Times recommends cracking and removing the outer shell of the oxycontin, then crushing it up and snorting it. Personally, I wouldn't know, but anecdotal evidence suggests you should just flush the evil shit down the toilet and get some good old organic codeine to deal with short-term pain. Chase it with a Heineken or two and it'll all work out just fine.

Anyone who appreciates the finer points of SCTV is A-1 in my book!