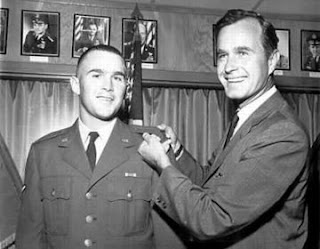 "Hitler's influence is waning so fast that the Government is no longer afraid of the growth of the Nazi movement."

William C. Bullitt, future US ambassador to the Soviet Union and France, 1932

"Believe me, Germany is unable to wage war."

"Though Germany is tremendously stronger in 'armored' divisions, Poland's superior cavalry is ideally suited to the terrain of Eastern Europe."

Maj. George Fielding Eliot, The Ramparts We Watch,  May 1939

"The modern German theory of victory by Blitzkrieg (lightning war) is untried and, in the opinion of many experts, unsound."

"By compelling Germany to sign a non-aggression pact, the Soviet Union has tremendously limited the direction of Nazi war aims."

"Japan will never join the Axis."

TO begin, assuming William Edgar Borah really said if he'd just been able to talk to that Hitler fellah the little unpleasantness over Poland could have been avoided (and we have no reason to doubt anything Charles Krauthammer would say three times), it makes him guilty of naiveté, not genocide; as above, he's in good company when it comes to boat missing, not to mention that any American ought, we say ought to be aware of how pervasive Isolationism was in his own country even as another war in Europe looked inevitable.

I suppose de-grandeurizing "our" victory in WWI, to the extent of recognizing the profound effects of that Grand Folly and the worthless--less than--deaths of millions (compounded by a flu pandemic that killed twice that number) on the people lucky enough to live through it is out of the question, certainly on the Right. And admitting that, had Austria-Hungary or Serbia actually negotiated with The Enemy the whole thing would have been avoided, including the conditions that led to the rise of Nazism, would no doubt trigger a massive breakout of hives. Still, we might note that it's a fucking stupid thing to say on its face.

This we imagine as the best political response, rather than outrage about the Most Disliked President in History spewing shit about domestic political opponents before a foreign audience: the man's full of it. The idea that an Anglo-French declaration of war over the Sudetenland would have "stopped" Hitler is sci-fi stuff. What happened after war actually was declared? Sitzkrieg. Britain had no matériel; French military doctrine called, basically, for sitting behind the Maginot Line. (Criticize 'em all you like, but they'd stopped the Germans in 1914, and their failure in 1940 was due to complacency, not Appeasement; then ask yourself who th' fuck we are to be questioning anyone else's military doctrine at this point.) The US Congress passed the Neutrality Act of 1939 (which, to be sure, amounted to taking sides, but it may be distinguished from transporting non-existent armies around the globe in order to prevent the Holocaust.)

What all these appeals to Chamberlain's, or Borah's, public failures to foresee events clearly proves is that it's possible to view events more clearly (if not always more accurately) after they have occurred. It's a bit curious that the same administration that now misses that point was so eager to use it in the wake of "Bin-Laden Determined To Attack US". Ain't it?

How many times does it need to be pointed out that current fucking events (Iraq), the favorite recent historical era of the Right (the Cold War), as well as any reasonable analysis of the "appeasement" of Hitler show these idiots to be wrong, wrong, and wrong? It's blind fucking militarism as the solution to any problem that fails, disastrously, time and time again.

The idea that an Anglo-French declaration of war over the Sudetenland would have "stopped" Hitler is sci-fi stuff.

And the Sitzkrieg, the lull -- that shit's never taught -- it's just a straight-forward progression from Sudetenland to the Battle of Britain.

Too bad you aren't in the White House press corps to educate the "journalists" and make Dana Perino's head explode juxtaposing the irony of hindsight in 1939 to the Bin Laden PDB. I would expect you to do a follow-up on this.

Great points, Doghouse. They're not easily treated in soundbites, of course, but you will be (or maybe already have been) pleased to see how our probable nominee handled David Brooks on a similar tack a few days ago: http://www.nytimes.com/2008/05/16/opinion/16brooks.html?_r=1&oref=slogin.

Obama is nobody's fool. He responds thoughtfully and effectively to this militaristic stock-in-trade of the modern GOP. Brooks knows he's going to be dealing with him for a while, so rather than short-sheeting him in this column the best he can do is to try to coopt his pragmatism.

See, Obama isn't their worst nightmare. He's like the GOP before it became its own nightmare. Yeah, that's it.

One mild defense of Lloyd George: in 1934 Germany had not gotten very far with rearmament and the Reichswehr (later Wehrmacht) was not yet up to strength. When Hitler ordered the military reoccupation of the Ruhr in 1936 his generals held their breath while the operation went forth. The French army was believed to be far stronger at that point.