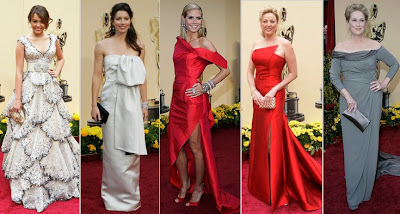 Contestants will please note Ms Streep there, on the end, the woman
who looks as if she'd actually worn a gown before?

Frank Rich, "What We Don't Know Will Hurt Us". February 22 (A serious take from Melina is here.)

SO far as I know, I owe The Oscars™ for exactly one thing, and it's not anything that occurred during the more than 700 hours of celebration of Arts and Sciences that have been televised during my lifetime. It was back in the last days of snail mail, when the livin' was easy and the snark less ill-considered, when Premier magazine had a contest for Readers' best succinct Oscar fashions summation, and someone wrote, "Ann-Margaret: the rule is only one hairdo at a time."

I've been appropriating that one ever since, but other than that and the cosmic background radiation inside my skull ever since Oliver! won Best Picture when I was twelve, there's nothing, really. Not that I was some sort of wunderkind, or anything; just a happy accident that I grew into an adult appreciation of film without a child's little-red-wagonesque attachment to Whoopie Goldberg monologues or big production-number salutes to This Year's Nominees as choreographed by Gower Champion.

And we've been over this many times, but I'm a sensitive sort: I don't care if you love the fucking Oscars; more power to ya. If, however, you imagine that they reward The Arts, or that The Arts are even amenable to such treatment, I would probably move my chair away from yours as discreetly as I could once a suitable interval had passed. Discernment is a necessary life skill, while discretion, unless you're the prey animal, is more like an option.

And leave us admit, then, that it is palpably obvious that Discernment is what has abandoned us these past few decades, and that The Oscars™ are a major reason; it is certainly no coincidence that the Whecking Baw of Witawacy, Barbara Walters, reanimated her infestation of the culture via "celebrated" Oscar-night interviews with people who, by and large, were bereft of thought. We continue to treat such matters as if they were large, annoying, but ephemeral infestations of gnats instead of blood-sucking, disease-ridden parasites. Let's remember, it's not only Walters--who had already been roundly rejected by everyone who met the basic literacy standards of Nightly News Viewership--it's also the goddamn spectacle of professional yenta Joan Rivers--who'd already been disposed of by late night talk show viewers--which is entirely the fault of anyone and everyone who helps perpetrate this Red Carpet shit. I mean, even after she'd begun to look like Lon Chaney Sr. in dimestore earrings, fer chrissakes. Fun's fun, but after the pool boy has aspirated a quart of chocolate pudding is no time to start trying to think up a Safe Word.

No one knows, of course, but a bigger question may be whether we really want to know. One of the most persistent cultural tics of the early 21st century is Americans’ reluctance to absorb, let alone prepare for, bad news. We are plugged into more information sources than anyone could have imagined even 15 years ago. The cruel ambush of 9/11 supposedly “changed everything,” slapping us back to reality. Yet we are constantly shocked, shocked by the foreseeable. Obama’s toughest political problem may not be coping with the increasingly marginalized G.O.P. but with an America-in-denial that must hear warning signs repeatedly, for months and sometimes years, before believing the wolf is actually at the door.

Look, Frank: we're tired, really, of mentioning that if you're all-so-concerned about what's happened to America you might try going back in time and avoid helping impeach Bill Clinton and elect George W. Bush. Seriousness is just another game to you peddlers of the official script, so stop pretending it's someone else's fault when the citizenry turns out to be superficially informed. Don't say this:

It wasn’t until the Joseph Wilson-Valerie Plame saga caught fire in summer 2003, months after “Mission Accomplished,” that we began to confront the reality that we had gone to war in Iraq over imaginary W.M.D. Weapons inspectors and even some journalists (especially at Knight-Ridder newspapers) had been telling us exactly that for almost a year.

as though the public was actively ignoring Landay and Strobel, rather than actively being hoodwinked by page A-1 of the Times, aka Your Own Fucking Paper. When "Liberal" centrists say something like, "Oh, dear, we might have to nationalize the banks, just a little, but all those ignorant peasants out there aren't gonna like it," what they mean is "I don't want to nationalize the banks and saddle the ruling Democrats with the image of a party that does things; can't we wait until sufficient numbers of formerly middle-class people are starving on our sidewalks, and we're forced to?" Real Americans, at least a major chunk of 'em, have voted and hoped for Change for two election cycles now. It's not crap-culture Americans who're resisting the obvious, tested step of Swedish-style nationalization; it's centrist fucking Democrats worried about re-election.

Take a look above. Somebody decided to put Miley Cyrus (question: why is Miley Cyrus even at The Oscars™?) in a series of dust ruffles and one of Elvis' old Vegas girdles. Heidi Klum--Heidi Fucking Klum, international spokesmodel and fashion-show MC--(question: why is Miley Cyrus even at The Oscars™?) looks like someone was forced to dress her in a speeding taxi. It's a direct result of the whole Nancy Reagan Return To Ersatz Glamor shit, perpetrated by a bunch of old fogies who couldn't cut it in the era of Julie Christie or Diane Keaton, women whose sense of style was grounded in their own Time, and owed more to brains than thousands of dollars indifferently dumped on couturiers. Money vs. Taste is like the Globetrotters vs. the Washington Generals. You know who to bet on, the trick is finding someone to cover. The Oscar™ catwalk isn't about Glamor, which is lucky since it rarely achieves it; it's more like what some designer's idea of glamor would be had he or she actually lived in a glamorous time.

But we do not live in a glamorous time; the average extra on Turner Classics exudes more glamor than most Oscar™ nights do in the aggregate. By the same token, we are a fucking equalitarian society with a government increasingly stolen from us under cover of Reaganism. We don't need to chew our nails over finding a way to hoodwink the Great Unwashed into accepting nationalization where nationalization is the answer. What we do need is a means of convincing the apologists for the top 5% it'd be better to get out of the way now, before they're run over.

One day soon, when I go to Hollywood to accept MY Oscar, I will have my gown (hand sewn of course) adapted from one of those 30's classics. By adapted I mean suitable for someone *short* who refuses to wear heels.

As a matter of fact, I had my wedding dress made by a local taylor, who copied on old magazine photo of a "Princess" type dress, with a peplum, the friend to all -um- wide hipped women.

Aw, come on. Natalie Portman looked good. And I was too stupid to figure out Ben Joaquin Phoenix.

Portman? Wasn't she once described as "an ironing board with a face"?