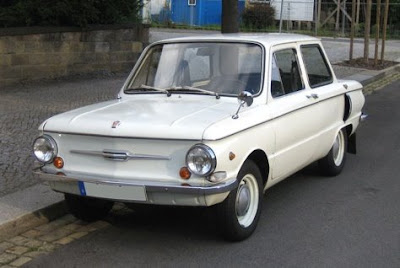 Be welcoming your new wheels, Carmel Comrades!
Comes in White, just like County!

Racist Star (which I'd be happy to link to if their articles didn't disappear after a week, by the way):

WASHINGTON -- Unfortunately for Carmel, swimming pools did not make a big splash in the stimulus package.


"There has been a lot of skepticism about the stimulus and about where the money was going to go," said Steve Ellis, vice president of Taxpayers for Common Sense, a Washington-based watchdog group. "This helps direct the funding to projects that most of the country think are legitimate. When you look at the realm of potential stimulus projects, casinos and swimming pools fall lower down on the list."...

Carmel Mayor James Brainard had proposed a $2.5 million water slide and wave pool improvement project at one of the city's parks as part of the $428 million in local projects he'd hoped to see funded with money being sent to local governments for roads, police, sewers and water treatment plants, and community development

YES, once again it's our whacky Socialist neighbors of the Great White North, Hamilton County, USA, the Wealthiest County in Indiana! The Fastest Growing County in the State! Land of Enchantment! Tamer of Farmland! Warm Bosom of Republican-Approved Freedoms! Completer of 1/4 of Road Projects Before the Money Runs Out!

When last we looked in on Carmel Mayor-Until-the-Next-Republican-Takes-Over Jim "Jimmy The Brain" Brainard, he was busy trying to explain why it was taking longer than expected for him to concoct an explanation for where the $90 million in Mitch Daniels' Private Toll Road Privatization Fund For Good Little Districts state funds went. In appreciation of the effort it takes for major Republican officials to adjust to the air normal people breathe, the Town Council voted him an additional $20 million of the additional $45 million in funding completion of the project will require according to professional liars.

Now, just in case you've forgotten, southern Hamilton county is the beneficiary of post-Interstate (I-465, I-69) white flight from Indianapolis' Preferred North Side, and three former whistle-stops (Carmel, pronounced like what you do to sugar, not what you do by-the-Sea, Fishers, and Westfield) are in a cutthroat competition to annex the largest possible chunks of Tax Base and Water/Sewer Assessments before it's all spoken for. Carmel got there first, mostly by virtue of being closer to Indy, and by being a sort-of retail center back in the day, as opposed to being a depot with a nearby Farm Bureau Co-op. Carmel is the classiest of the bunch, perhaps by default, but still; its massive taxpayer and tax-break funded building boom (condos, office space, trendy Non-Mall Mall, Arts Park, sometime-to-be-completed Opera Amphitheater [special grand opening performance by Susan Foster Brainard], plus too much shit for me to keep track of, or care) look like the plans came from Architectural Digest, except the Architectural Digest was in a dentist's waiting room. The Fishers layout, by comparison, appears to have been designed by a sarcastic model railroad enthusiast, and Westfield--last to get in the game--simply calculated the volume of big box retailers and their associated culinary henchmen which would fit in the available space, and then doubled it.

(Just for completeness' sake: Fishers also benefitted from the construction of Geist Reservoir, Central Indiana's own Chinatown, but without the orange groves. Fishers' attempt to annex all the mansions built on property formerly owned by the same Water Company officials who built the reservoir is presently moving through the courts. They're winning.)

Daniels' Slush Fund Those state monies were earmarked for Carmel to take over operation of Keystone Avenue, which meant one thing: dozens more opportunities for their beloved Roundabouts! saving taxpayers untold millions in traffic light bulb replacement costs. Of course, outside of that 2 mile stretch, or any of several Carmel neighborhoods they might mistakenly enter, drivers coming upon those things from the communities on either side never see the damn things anywhere else, and often not until it's too late. And then--surprise!--it turns out the project is actually going to cost what the original estimates said it would, rather than what the Mayor promised, except now it's going to cost even more because of delays, fuck-ups, and half-measures, and, probably, a little something extra to cover what the actual original cost estimate was, or should have been.

“Hamilton County will get a major transportation improvement sooner and the state’s taxpayers save money in the long run,” Daniels said at the time of the deal. “Mayor Brainard has again shown the imagination that is making his a great new Hoosier city.”

I guess by "sooner" he meant "after a three-year quagmire of construction detours", and that was before the thing ran off the rails. He was right about the "save money" thing, assuming he didn't mean the taxpayers living in Carmel, and assuming he did mean "in comparison to giving Jim Brainard a blank check and turning our backs".

Here's to you, friends of Mitch Daniels! Party of Small Government! Staunch Defenders of the Private Sector! Oh, what's this? Your $half-billion shovel-ready project list for the Socialist Barack Obama's Largesse Program? Thanks, we'll take it under advisement, 'kay?

Enjoy the construction. Enjoy the twenty-five teachers who won't have jobs next year while you've got 'em. Keep America Free, Baby!

Sorry about the Pool.

And look, I don't care--and I'm certainly not surprised to find--that Carmel's the first place with its hand out, hoping to complete the Contractor Graft-off with Federal monies now that the local well's run dry. What I do care about is this: that those Shopping Plaza Republicans who do manage to scrounge up enough principle to criticize the thing treat it--as with the Bush Presidency--as an aberration, as All Brainard's Doing, rather than SOP. What Republican administration has ever resisted spending? Seems to me you'd be voting Democratic, since that's the one party you can guarantee will run scared from the Big Spending tag.

But then, considering the way most Republican minds seem to work, the one really surprising thing to me is that Coca-Cola™ isn't known as the World's Best Selling Health Food.

Yes, I was in Carmel 30 years ago to represent a pile of cash on the East Coast that some Hoosiers wanted to borrow. They were not persuasive.