At Least Ask The Man Who Owns One, Why Doncha? 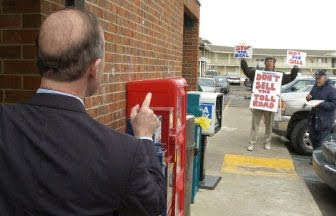 A principled but practical conservative respecting
the intelligence of the voters from a discreet distance.
AN alert, and possibly sadistic, reader points me to the latest in the seemingly interminable series of national Press remakes of Honest Mitch Daniels: Hoosier Railsplitter, the pugnacious gnome's Stealth Presidential Campaign bio, relayed with a straight face by people who seem to imagine, perhaps with grounds, that if we'll believe he's not yet running for President we'll believe just about anything.

This one, from WaPo's Business columnist Steven Pearlstein, is entitled "One Problem with Republicans: They've got the wrong Mitch". Using the same data, we arrive at "Two". So let's show our work.

This is at least the fourth installment this year, beginning, IIRC, with his cover story in the National Review, the Sports Illustrated Curse of politics, and here's an interesting note for anyone who's just got a Kitchenaid Pro 5 mixer in Imperial Gray: every single loaf arrives already staled. Which is great if all you want is crutons.

But if you've been paying attention in Indiana since 2005--it's harder than it sounds--by now you've watched Mitch take this same victory lap about seventy-three times. And the only thing that changes is that the results which can't be fudged get rotated in and out at the dictates of fashion or potential indictment.

Daniels is a rarity these days, an incredibly popular Republican politician who overcame last year's Democratic tide in his state to win a second term as governor with nearly 60 percent of the vote.

This is the principal distinction between politics and the 100 meter dash: they've both been dominated by lying cheaters in recent decades, but in track if there's a thirty mph. wind at your back the record doesn't count.

Daniels had a war chest sufficient to buy teevee time from April straight through the election. That his ads, as the sainted Mr. Clemens might've put it, contained a few stretchers we'll consider grist for that mill, but it didn't hurt that his opponent, after a contentious primary, was a woman either clinically depressed or legally dead. Or both.

On this day, Daniels is describing how, in his first term, he won bipartisan support for a program known as Healthy Indiana, which provides health insurance for Hoosiers who aren't poor enough to qualify for Medicaid but earn too little to afford buying coverage for themselves.

I'm sorry, but you or I, listening to a politician of either party stumping for our benefit, would probably take this sort of thing with a pinch of salt, assuming our health care plan covers that, assuming we have health care. Bi-partisanship! might be a little more impressive if 1) it didn't involve the party he referred to as a "bunch of car-bombers", and 2) it didn't involve a piece of feel-good legislation; "provided health insurance" might be a bit more impressive if 1) it actually "provided" health insurance, rather than allowing low-income Hoosiers to buy into health savings accounts, and 2) it wasn't necessary to "allow" them the right to exempt their pre-existing conditions just to get coverage.

Or, say, if the thing wasn't administered by the state's Family and Social Services Administration, which, under The Knife's watchful eye, managed to turn a billion-dollar privatization scheme into a total clusterfuck we're still paying for as we take it back over. Or if it hadn't been accomplished by raising taxes, contrary to Mitch's "conservative credentials".

Okay, it was cigarette taxes, but still: I'm certainly not against a program which has helped provide health care for 130,000 Hoosiers who might not get any otherwise. What I'm against is tossing out this mindless--pointedly mindless--crap to suggest that Daniels' track record says he's the guy who can lead a nationwide solution to the health care crisis without paying for it.

As he's talking, a thought suddenly occurs to me: They've got the wrong Mitch! Instead of relying on Mitch McConnell to lead Senate Republicans into battle over health care (or anything else, for that matter), they should have turned to Daniels instead.

The bad Mitch, as most Americans know by now, is the charmless and shameless hypocrite who offers up a steady stream of stale ideology and snarky talking points but almost never a constructive idea. McConnell has decided that the only way for Republicans to win is for President Obama to lose, and he will use lies, threats and all manner of parliamentary subterfuge to obstruct the president's programs.

Which effort, by the way, has been assisted by Indiana's two Republican Senators, the "Democratic" one and the "Moderate" Republican one, as well as every Republican in its House delegation. You think Mitch Daniels would be there bucking that tide?

If you ask me, I'd ask you why Mitch McConnell's propensity for Evil Parliamentary Abracadabra and Ideological Insanity aren't qualifications for leading the entire damned party. If you economic "conservatives" are so troubled by the red-meat, social-issues know-nothings among you how do you explain that thirty-year courtship? In what universe does the set of circumstances that put Daniels in the Oval Office in 2013 not also make McConnell, or something similar, Senate majority leader, then, or in 2011? What happens then? A sudden conversion to sanity? Quit bogartin'.

It's suggested that Mitch has no personal taste for the religious nuts in his party; I suggest that any scrap of moral fiber at his core is probably shredded balance sheets. The one act of political courage he's exhibited as governor--suggesting a one-year surtax on incomes over $150,000--went in the crapper about ten minutes later. If Palin isn't in the race he'll be caught in the stampede to grab the Palinistas; if she is--and god, I can't tell you how much I hope they both run--he's going to be faced with the decision to attack or no, and if he manages to stay in it'll come up time and again. I haven't seen any recent evidence that you can even run in the primaries without a sop to the extremists, let alone win, and all our evidence comes pre-Sarah.

The good Mitch, by contrast, is a principled but practical conservative who respects the intelligence of voters and would rather get something done than score political points.

Now I know you spent an afternoon at the Statehouse and an evening at the hotel bar, and didn't speak to anyone in between.

Daniels is a genuine fiscal conservative who took a $600 million state budget deficit and turned it into a $1 billion surplus but managed to do so without cutting spending for education and even increased funding for child welfare services.

Nor read the papers. Jesus H. Christ! He was hacking at education while you were typing this shit, and he'd already been forced to publicly declare that it would be cut before he allowed that precious Specious Campaign Talking Point "Budget Surplus" to be touched before he's out of office. If you'd'a poked around for two minutes you'd have tumbled onto the fact that that Surplus--which you guys sure do seem to love so long as the appellation "Clinton" isn't attached to it--is one part accounting sleight of hand, and several parts sloughing off responsibilities onto local governments. At the very least, to be fair about it, that "budget deficit" he inherited should go from "$600 million" to "zero", since that's where the accounting tricks in use at the time placed it. Either that, or subtract the $1.3 billion FSSA boondoggle before we start raving about the child welfare services it managed to snag in red tape and incompetence.

He pushed hard to lower property taxes but didn't hesitate to propose temporary hikes in income and sales taxes to keep the state in the black.

1) His inaction, and that of the Republican majorities in the 2005 Legislature, were the proximate cause of the property tax crisis he "solved". 2) That proposal to hike taxes to "reduce" the "deficit" lasted about 36 hours while his party screamed bloody murder. Some backbone. Some flexibility.

He privatized the state's toll road and then used the $4 billion proceeds to launch a major public works investment program.

Okay, he didn't "privatize" the Toll Road, he leased it, for seventy-five years (his supporters still tend to go ballistic if someone says he "sold" it, so fair's fair). And this may be a "good" deal, provided one uses money to keep score and calls the game seventy years before the final buzzer, and without bothering to consider what's happening to tolls or road maintenance. It's also possible that Daniels sharped the company which had already paid for the Chicago Skyway, and had to have the Indiana Toll Road, too, since that's the only way to get on the damn thing from the east. Either requires us to simply allow as how governments ought to be in the business of trading the people's assets like so many mortgage-backed derivatives, which some of us dasn't, and to imagine that any and every such deal will be a good one financially and free of insider monkey business. The latter two points being ones which are incontestably refuted by Mitch's other big deal, the FSSA swindle. So, y'know, it's something of a wash even viewed in best light, and without noting that the whole thing was supposed to build us a new superhighway no one needs, through wetlands and farms we do, except that now, with the downturn in the economy, the powers that be deny it was ever supposed to pay for more than the concrete and lane painting.

Tellingly, both Mitches like to talk about the Department of Motor Vehicles. The Washington Mitch conjures the image of long lines and uncaring bureaucrats and asks, cynically, whether you want folks like that determining your medical care. The Indiana Mitch, by contrast, rolled up his sleeves and transformed his DMV into an efficient, consumer-friendly operation.

Oh for fuck's sake, Pearlstein, how did you spend your time? Yeah, the BMV is much improved, now, after his boy initially fucked it up so badly that Hoosiers actually forgot how awful it had been previously; it hums, now, thanks mostly to the updated computer system the previous administration bought, and he had rushed online before, y'know, any complicated testing or stuff.

As he's talking, a thought suddenly occurs to me: They've got the wrong Mitch!

it's nice to see you mentioned over at balloon juice as a cross between The Rude Pundit and James Thurber, especially since as soon as i saw "mitch daniels" my first thought was i know where to find the definitive take down on this offering from the wapo

Yeah, when I saw that pearlstein article I hoofed it over here.