Programs! Gitcher Programs! You Can't Tell A Heart-Warming Story Of Triumph Over Adversity From A Gesture Rich In Symbolism Without A Program! 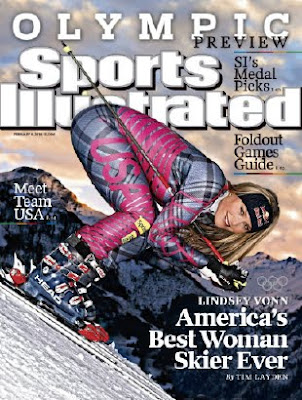 They sure ain't posin' Kobe that way. Although
if they'd asked he'd have probably stood behind her.
Karen Crouse, the Newspaper of Record, this very AM:

The first time Shani Davis won an Olympic gold medal in the 1,000 meters, he skated a victory lap while hugging a teddy bear. On Wednesday night, after becoming the first man to successfully defend his title in the event, Davis held an American flag to his chest, a gesture rich in symbolism.

IF there's one thing I'm practiced at it's knowing when I'm not wanted. For teevee Olympics coverage the recognition came in 1976, the Nadia Comaneci Games, La Première Olympiade de People Magazine. Now, to be sure, Mozart was tossing off symphonies when he was five, and Picasso could out-duel Dürer with a #2 pencil at eight, but you'll note that, in general, the Arts are not dominated by pre-teens. Anything which is should be made tougher, more dangerous, and kept off Prime Time.

Don't get me wrong; I hate gymnastics. But I'd've been willing to share. It's just that we didn't share. No one even bothered to ask. Overnight the Quadrennial Games became twelve nights solid of Summer Blockbuster movie trailers (and they were all chick flicks, but, hey, unlike SI at least I'm tryin' to be fair!) sandwiched between two outdoor Busby Berkley numbers.

(It was impossible to watch those Perfect 10s, by the way, without the overwhelming suspicion that one was being Took, and that the whole thing had been calculated by whomever controlled the Gymnastics federation after he/it/them seeing the profit potential in the American public's Cold War Be Damned embrace of the Gosh Darn Bug Cuteness of Olga Korbut four years previous. Especially seeing as how, up to that point, it had been every American's patriotic duty to believe Olympic judging was apodictally corrupt because the Warsaw Pact cheated the Free World every single time. Similarly, it was impossible to miss the nostril-filling Corporate Desalinization efforts underway since Tommie Smith and John Carlos had raised the Black Power salute, rather than the National Spirits, in '68, even if you had a touch of hay fever.)

And, perhaps by accident of timing, perhaps not, the guiding principle in all this since has been the most iconic Chick Flick of All Time: Rocky IV. George Foreman had waved a little American flag around when he won in Mexico City, but that was either evidence of his precocious salesmanship or a Fuck You to Smith and Carlos and Ali; you'll note that George never got drafted. It was Bruce Jenner, in '76, who--looking to cash in at the tail-end of the You Gotta Remain An Amateur Era--turned flag-waving into a required part of the post-victory orgy. Today there's a three-person support team to make sure the winner, and his teammates, are directed to whomever's holding the prop flag supply at ringside, ten yards past the finish line. And, as might be expected, this culminated, in 2000, in Bob Costas doing his best Lindsey Vonn pose for Nike, which had just seen spokessprinter Maurice Green and the rest of the victorious 400 m relay team pose and preen using the Stars and Stripes the way a Vogue model would use a bolt of chiffon. "Certainly no disrespect for our national symbol was intended, folks! Back after this."

Of course by now everybody does it, and NBC polices the thing by showing only events Americans win. I mean, aside from the events they show the occasional Foreigner win, in order to prove the coverage isn't three-quarters jingoist claptrap and one-quarter Overcoming Injury, Mom's Cancer, and the Death of a Beloved Goldfish. Not to mention the decapitation of a couple competitors. The only criticism--the only criticism--allowed to stand was the griping about Ursain Bolt celebrating for the final six meters of the 100, in what would turn out to be the greatest Track and Field accomplishment in thirty decades--and not drug-assisted, to boot, although at this point everyone out there is partly slimed by association, thanks so much--and the only such display we know wasn't fucking calculated in advance for maximum Wheaties-box photo potential.

Okay, that's hitting the broadside of a barn, but I didn't ask NBC to paint everything red. I swear my objection to all the facile nationalism isn't political, although the Right in this country has done everything it possibly could to turn The Flag into the Coca-Cola™ logo with more stars. It's about sportsmanship, a quaint old notion of my dotage and, like all my notions, one with limited commercial appeal. It's the Olympics, formerly the quadrennial meeting of a vicious world to celebrate the evanescence of Sport, and Life, for that matter, now the Global Five Ring Franchise-Rights Holding Company with Biennial Spin-off in a world so vicious it trades punches during the Invocation before getting down to lying and cheating in earnest. How nice it'd be, just once, to see some God-approved victor parade with the Olympic flag!

Yeah, I'm a dreamer. I just happen to realize that the world would be a much better place if the people who professed religious conviction were forced to act like it when the chips are down, and if the sort of emotional adolescent who has to see his country's flag waved over something he has nothing whatsoever to do with (athletic accomplishments) or wants nothing whatsoever to do with (chasing armed insurgents across the Fourth World) demanded it be done with respect and etiquette, not used as a prop pennant for commercial semaphore. And I'd like to teach the world to sing. Doesn't mean I expect it.

Okay, the IOC has been run by corrupt Nazi officials since before Germany was run by corrupt Nazi officials. And there's nothing on God's Green Earth could shame NBC, and the whole thing's a Ponzi scheme run by national committees and international cartels, and that's apparently just how we like it so long as we win the medal count. Is it too much to ask we find a way to be honest about it? Costas at least seemed to realize it was the money at stake which made excusing Greene and company from using Old Glory as bath towels the only option; last night the speed skating color man was doing double duty as Shani Davis' PR flack, spending near as much time telling us how universally loved the man was as he did calling the race, and he didn't seem to realize he was jumping through hoops that were melted down and sold as scrap twenty-five years ago. Just win, baby. Get with the program. If you're going to treat the Olympics as a permanent extension of the Cold War, or World War VI, or whatever--I'm not even sure you know why we're supposed to hate everybody else--and he's an American, the problem is solved, because there is no problem. If he'd already pocketed his endorsement checks, and, for that matter, the Gold medal, that's it. Nothing else matters, and nobody's supposed to care about anything else unless he's Jamaican or Canadian or something. The number of Americans who will be able to spell "Shani" two weeks from now = the number of Americans employed by the speed skating federation + members of his extended family. Not that that's really a whole lot fewer than the number who can do it now; I probably should rethink the spelling thing.

Or there was a little matter of the fact that he'd simply quit the 500, which he, and a lot of other "big" skating "stars" treat as a mere warmup, thereby depriving someone else of a moment in the Olympic sun klieg lights, and committing a disqualifying offense if this were Track and Field. Ms Crouse?

For Davis, the victory validated his controversial decision to skip out on the 500 meters midway through the event Monday, after a lengthy delay caused by a malfunctioning resurfacing machine and a middling first race.

Finished translating that into English? Good. Let's just note that the criticism had nothing whatsoever to do with whether he'd win the 1000 m Gold, nor whether he'd save energy if he didn't skate the 500. The first was an imponderable until the competition was over; the second could have been answered before the trials, before he learned to skate, or before this whole mess became something that would've make P.T. Barnum blush.

I am so sick and tired of the "USA! USA!" chants. Particularly offensive were last night's snowboarding finals, where, *GASP*, the US men won! And Carrot Top encouraged the crowd in the chanting! Seemed in bad taste to me.

My husband and I are convinced that all the snowboarding events were added to the Olympics to get the US higher on the medal count.

I agree with the previous comment, but you have to love it when athletes, who probably make the IOC head honchos nervous just to be near, actually do well.

But although it was fun to watch, how does one quantify that stuff? Seems more fitting for X Game fun.

I hadn't been paying attention to the Olympics, so I hadn't heard about Shani Davis quitting the 500. Here's what his press attaché says:

"He got the feeling he wanted and I think this was something he might do anyway. It was just preparation. The lengthy delay made that decision a lot easier. If he had been in medal contention, he would have pushed through."

GOOD LORD. If he thought he could win he would've stayed on, but if he isn't sure he's going to win beforehand, why bother?

When my brother and I were younger we played board games, and we quickly figured out that if you were losing, the best dick move (Even better then "accidentally" flipping the board off the table) was to just concede the game and immediately asking to play another, thus depriving your opponent of the pleasure of actually winning while still allowing you to look somewhat gracious.

So Shani Davis is acting like my brother and I did when we were fourteen, but with slightly less class. I am truly astonished.

Yes, I just think of snowboarding as being more of an X-Games kind of sport I guess. I mean, are they going to add skateboarding and BMX to the Summer Games?

Tho not a bra-burning type feminist, I do get frustrated with women, especially talented professionals, who cheerfully adopt titillating poses for their publicity photos.

The corporate media of course, just wants to use these women to sell impossible-to-wear tight, sultry clothes to other women, using the apophthegm* "Its "Liberated" to dress and pose like a Street Walker.

I found this word in the thesauris, and tho it isn't quite the right word, I just HAD to use it. Isn't every day I find a new hard-to-pronounce word. Thanks, Doghouse!

... oh and another thing. You can see from the way her hair is hanging at about a 45-degree angle from the 'ground' that the pic was not taken with her on an actual slope. Big Surprise! But they could have photoshopped the hair to look natural.