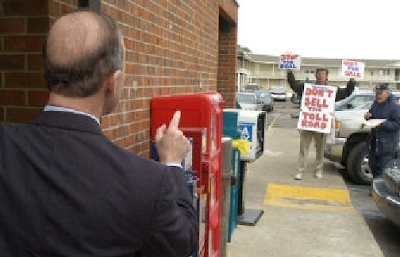 FIRST, the news from the more neatly coiffed:

Sirens in Honolulu after the quake sent a tsunami racing across the Pacific.

This is not me poking fun at some wholly predictable extemporized flub from the latest Wall-to-Wall; it was a taped piece which involved some editor at some point listening to this while splicing in shots of big hotels as seen from whatever big hotel the cameraman was in when those sirens went off, and the two-foot white Bronco waves that followed. I wasn't even listening, merely in the same room while my Poor Wife checked out CBS Sunday Morning News for Invalids, and as the thing shot by I turned to her and said, "Th' fuck did she just say?"

We're convinced, by the way, that this is part of the Shift of Semantic Obligation away from the Speaker and onto the Listener, part of the Star Trek/Bahbwa Watahs-keyed Destruction of Western Enlightenment and Reasonable Expectation of Semi-Rational Behavior in Others which coalesced with the election of Ronald Reagan. (Step 1: Truth too unpleasant to stand anymore? Construct your own reality from paper mâché! Step 2: Reality now constructed of paper mâché? Time to have the nightly news read by a tenth-rate real estate shill with a speech impediment! Step 3: Reagan. Step 4: Reagan Airport. Step 5: No more need to give reporters big bucks for the willingness to shill, as no one knows the difference any more, thanks to Steps 1 and 2.) And we're pretty sure that there's some reason they can't erase the Tell, which is the replacement of the schwa with short "a", the substitution of "eng" or "ang" for the "-ing" of present participles, gerunds, nouns derived from verbs or adjectives, adjectives themselves--and occasionally prepositions and adverbs--derived from participle forms, and--especially--the maddeningly regular indication of a vaporous question mark in simple declarative speech ("Ring-ang an-dorse-mants for the PresidANT today? as he appoint-TAD Evan Bayh? to the new-lay crea-TAD post of Mor-als Czar?").

Fuck it, Ross Douthat just "wrote" a "column" touting Indiana's Angstrom Governor Mitch Daniels as the Official Republican 2012 Presidential Dark Horse, based, as always with Douthat, on someone else saying so first. I've been trying since I read it to figure out how to describe the emotion of seeing the World's Most Overexposed "Conservative" Thinker trumpeting the World's Most Ludicrously Over-Praised "Conservative" Executive; a fantasy scenario in which the Red Sox and Yankees mathematically eliminate each other from the playoffs on Opening Day, causing most of the Beantown sportswriting contingent to set each other on fire before hurling themselves out of the Press Box, only to land on Tony Kornheiser and Bill Simmons, both of whom are wearing ties made of C-4, is the best I've come up with so far, although "Canada beating US Hockey for Gold after a five-day Hubris Festival triggered by a semi-meaningless win in the Prelims" is running a close second.

Set a group of plugged-in conservatives to talking presidential politics, and you’ll get the same complaints about the 2012 field.
Mitt Romney? He couldn’t make the voters like him last time ... Sarah Palin? She’d lose 47 states ... Mike Huckabee? Better as a talk-show host ... Tim Pawlenty, Jim DeMint, Bobby Jindal, David Petraeus? Too blah, too extreme, too green, and stop dreaming ...

But murmur the name Mitch Daniels, and everyone perks up a bit. Would he win? Maybe not. But he’d be the best president of any of them ...

Okay, let's start here. Douthat--if it were someone else we might say "shrewdly"--is going to avoid some of the typical double-edged claims of the periodic national Daniels puff piece. "Bravely proposed raising taxes for ten minutes," for example, and "Hates religious 'conservatives' as much as he hates 98.9% of the rest of humanity", for another. We suspect the omission is designed to make Mitch more Douthat-friendly, which serves to point out that this Remaking the Republican Party thing which apparently got him the gig at the Times nothing else can explain isn't exactly going so well, is it? As of this point the Party has pretty much disinvited you and Reihan Salam, and losing 47 states looks like the early favorite. You are not going to solve the problem--I don't believe you ever really wanted to solve the problem, by the way; that New Republican Paradigm shit was just something that sounded like a good idea for fifteen minutes, like--I'm merely speculating--your wife's John Paul II tramp stamp--not going to solve the problem, I say, by wistful creation of an Antimatter Fred Dumbo Thompson for 2011. The Republican party is bereft of ideas. This is not anything new; you guys removed Thought Crime from Washington in 1981 by eliminating the first half of the equation. Somebody then convinced those people they were the irresistible Wave of the Future, and those people convinced you, Ross, and you never questioned it. Now you want Brownie points for admitting that the Real America thinks Sarah Palin is an idiot. Too bad that doesn't include the majority of Republicans, Ross-O. By the way, that stabbing pain in the rear answers the Republican question, Who's the Trick Here?

Let's put it this way: Daniels could win the Republican nomination on a flying pony; he can't win it without stampeding Rightward faster than Mittens did two years ago. Not that he's not capable. I've been watching him since he worked for Dick Lugar, and if he's got any moral sense that doesn't come printed on green paper it's escaped me. But he's not gonna Sensible his way to the Republican nomination. Look at the fetid human grease spot Maverick John had to turn himself into last time (I'm being charitable, here; I thought he was a slimeball to begin with. It's the Base that thought he was Castro without the military successes), and that in a year when the Republican brand was so clearly a handicap that even the Base realized it. And now he's running even further Right just to keep his seat in Arizona, fer chrissakes. Present evidence that a non-insane, non-Bible-thumping Multinational Shill can hoodwink the rubes and gain the nomination, as expressed in Kilomitts per Primary: Zero.

And take my advice, Ross boy, it ain't worth it. The Chip Down There on Daniel's shoulder is bigger than the box he stands on to reach the big boy microphone, his wife is Miss Havisham with more gowns, and his Economic Miracle doesn't bear scrutiny. That Healthy Indiana deal, for example, is financed by Medicare, not Miracle Mitch Money, and it's a great deal, maybe, if you found yourself not quite qualifying as impoverished, with enough jack to make an insurance payment every month and your lot sufficiently improved by catastrophic coverage alone . The Toll Road deal--it was not exactly universally acclaimed in Hoosierland--looks more and more as though the Governor of Indiana appropriated state property in order to hold the company which had just shelled out for the Chicago Skyway for ransom; "fiscal" "conservatives" might wish to consider why that sort of behavior is admirable while bail-outs are not. Not to mention that the promised return has been swamped by the economy, and the boondoggle highway extension it was supposed to pay for it will now partly pay for. And ixnay on the welfare privatization thing there, Ross: Daniels had two years of failure, which taxpayers paid for at full face value, before he pulled the plug on a program that stank of corruption, insider dealing, and bid-rigging from the outset, and which we're going to spend god knows how long, and how much, to set back to the working order he found it in.

For a Daniels candidacy to catch fire, what’s left of the Republican establishment, currently (if reluctantly) coalescing around Mitt Romney, would have to decide that he’s the better pick. That would mean gambling that the best way to defeat the most charismatic president of modern times is to nominate a balding, wonky Midwesterner who reminds voters of their accountant.

Well, my accountant hasn't sold lands I held in trust without discussing it with me, or solved an accounting shortfall by laying off the debits on county and municipal accountants and declared himself a genius. But then mine didn't help the Bush administration wreck the economy in the first place. Maybe I'm atypical.

A half-wit with a bad teenage beard getting a Times Op-Ed gig springs immediately to mind.

I think I've figured it out. Keeping Douthat around is part of the plot that ultimately involves Pinch putting you behind the NYT's paywall.

It's like Douthat is going out of his way to piss you off. Nah. Couldn't be.

I can't believe someone is writing about gerunds, participles, adjectives, et al. Did you have my mother for a teacher (I did)? Perhaps my alcohol-riddled brain forgot that "sabbatical" she took in Indiana.

Okay, no point in waiting until the last minute: Bobby Jindal is not a natural born American (as currently defined by Orly Taitz).

Inventing a group of "plugged-in" conservatives who just happen to say all the things in Douthat's head is well into Jonah Goldberg "an emailer writes" territory, and the Mitch murmur is just plain embarrassing. This is why they'd never let Mr. Riley write for the Times: too much integrity. (Douthat also lacks anything resembling style, but that's another story.)

No, there are murmurs, apparently. From Erick the Erick's RedState tantrum about Ron Paul's win at CPAC:

This year, Ron Paul breaks Mitt Romney’s winning streak. Clearly Romney realized he was not getting a good return on his investment of organizing voters to vote — a regular phenomenon among potential candidates.

2,395 CPAC registrants voted in the CPAC poll. It’s the largest number of votes in CPAC straw polling history, but but less than 25% of the total turnout at CPAC.

48% of the votes cast were from students. 32% were from paying non-student individuals.

31% voted for Ron Paul. The crowd booed when it was announced.

4% for Mike Huckabee and Newt Gingrich

That last line is just stunning. I wish he hadn't already completely lost his mind so I could tell you how much he's lost his mind.

(P.S. As it always does, the CAPTCHA seems to have a good neologism: Son of Erick's thoughts are OFLUMENT.)