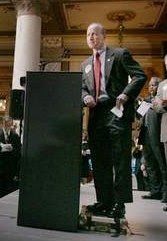 As Bush's OMB Director, the Big Brain
erased a $127 billion surplus in 2-1/2 years.
As Indiana Governor he's erased
a $1.5 billion surplus * in five.
{127/50} / 2.5=1.016. He's improved
his Deficiency Rating by 70% in just one decade!
LAST week on Colbert Charlie Cook said something about the plight of one-term Democrats from Red districts, which, of course, sorta raised the question of why one would want to be a Democratic representative of a scary Republican district if being a de facto Republican were the only way to remain one. But then, of course, this sort of kowtowing to the conventional wisdom is what accounts for the Dems' roaring successes over the past three decades, so who am I to argue?

This segued nicely with a discussion at Tex Edroso's about the insufficient Evangelicalisticism of the Teabaggers, which reminded me of two things: one, the "resurgent" Republican party is the same fucking train wreck it was in 2005, and, two, Mitch Daniels hasn't got a prayer with either major faction.

Today's Racist Beacon--which, incidentally, has blocked comments on all Carmel High School basketball team sexual battery/hazing stories, while continuing to permit all manner of "Give 'em some watermelon. That'll keep 'em busy" analysis of the Indianapolis public schools whenever stories touch on them (or not)--brings the cheering news that while the state's experiment in being just like California has pretty much resulted in our being just like California, at least the dominant prairie/abandoned strip mall topography should keep mudslide damage to a bare minimum:

If state revenue doesn't rebound soon, the partisan battles of the 2010 legislative session that ended last week will be child's play compared with challenges lawmakers will face next year.

Under the state's revenue forecast, all of Indiana's $1 billion surplus will be drained when the current two-year budget cycle ends in June 2011 -- and that's if the economic experts are correct.

So far, they haven't been.

Which, we remind the reader fortunate enough to view Indiana politics as a distant farce, is precisely due to the orchestrated Property Tax revolt, and the resulting reliance on sales and income taxes just in time for the malingering Bush/Daniels Decade of Economic Anemia to develop full-blown sepsis.

Naturally, this is known as Fiscal Responsibility.

But fear not; it's not like Mitch Daniels is using that Big Brain just to grow hair:

In fact, revenue has missed projections for 17 consecutive months, leading Gov. Mitch Daniels to order 20 percent in cuts to state agencies, a $150 million -- or 6 percent -- cut to state universities, and a $300 million -- or 3 percent -- trim to K-12 schools.

Those cuts were needed just to keep from spending beyond what the state has in savings. Daniels warned Monday that the decisions aren't likely to get easier unless the national economy strengthens soon.

"If we don't see a really significant improvement from anything I see right now, it'll be extraordinarily difficult next year," Daniels said. "In the 10 months between now and the beginning of the next legislature, our number one priority is going to be to try to maintain Indiana's solvency, Indiana's AAA credit rating, Indiana's position as one of the handful of states that only nicked, as opposed to gouged, education and didn't raise taxes.

"That's going to be a tough thing to bring off."

Gee, I dunno, Mitch. A man who can raise the state sales tax almost 20%, making Indiana's rate the second highest in the nation, after…I've got it here somewhere…oh, California, and then claim he "hasn't raised taxes" seems pretty much capable of anything. Which is what I've been saying about you all along.

And "nicking" education, well, the only thing that prevented big tuition increases this year was the disgraceful Senate Permanent Committee on Finance and Per Diem Collection holding university presidents hostage. Ain't happenin' again. Public schools are already making big teacher cuts and shutting down buildings; once you reach that point there's only more of the same left. (Well, they could ask for Property Tax increases, and good luck with that.) And all this was with one-time Federal education money preventing the considerably larger disaster if it'd just been up to Mitch and the Boys.

It is interesting how this is suddenly a question of the national economy, when up until November, 2008--the first month of those missed tax projections, oddly enough--Mitch was the Miracle Worker who'd created the Indiana Island of Prosperity. And, of course, 2011 is not about to see the return of Fearless Mitch Daniels, courageous, non-ideological tax raiser from January 11, 2005, AM, thru January 11, 2005, PM. Better to have your "legacy"--as the Dean of Local Political Reporters and Expense Account Luncheon Guests Jim Shella put it, with, I have to give him this, a straight face--turn up on someone else's account books.
It'd be funny if it weren't so goddam depressingly familiar: newly crowned State Emperor, with newly-minted legislative majority, ignores looming Property Tax disaster, along with all other tough decisions, then is credited with "balancing" the budget while prominent state rival is blamed for Property Tax increases he had nothing to do with, which clears the path to re-election, and the start of Daniels for President, Oh, Gosh, No, I Have No Intention of Running Except Some People Are Asking Campaign. (And, really, is there anything sadder than a sixty-year-old, five-foot two inch coquette with a combover?) After which the very real problems which had been swept under other people's rugs to get him to this point jump up and bite everyone in the ass anyway. Wow. Who could've predicted it?

And this will impede his campaign narrative how, exactly?

All this now has a ring of familiarity to my ears. Here in Jersey, our new RightToLife upholder of individual freedoms, Gov. Christie, is displeasing the public with attempts at large transit and education funding cuts.

It's not like they weren't told during the campaign; even I, who paid scant attention once I knew the guy was an abortion opponent, vaguely heard that he was a proponent of Fiscal Responsibility. But people just don't pay attention.

Christie is, however, considerably *bigger* than Mitch.