That Thing In My Pants And Other Dangers

APOLOGIES for a less-than-sparkling interest in politics this week; it is the Dog Days, after all, and I missed all the really funny bloggers explaining to the Netroots how to keep saying "Fucking Lying Shitheel Acephalic Racist Fucks" every day and still keep it fresh. I'm not sure where our governor is summering, but I wouldn't be surprised if he and the boys are working on alternative explanations of how he turned the state's $500,000 deficit (dollar amounts adjusted according to how big you need it to be to make a point) into a half-million dollar shortfall and counting. Just in case "it wasn't my fault" doesn't soar like a turkey buzzard. Things are so bad economically that not only did he send out the Indiana State Auditor to do his 'splainin'--no easy task, since he had to create the position first--but he's had Lt. Governor Becky "GED" Skillman doing all the ribbon cutting this summer, celebrating more of those vaporjobs we'll be getting in 2013. And we hadn't seen Becky in so long I typed "Stillman" before I caught myself. Daniels missing a ribbon-cutting opportunity to claim credit for someone's employment is like Payton Manning missing a snap. He once turned up at a new Starbucks, fer chrissakes.

Mostly I've been rediscovering the joys (and perils) of riding a bicycle that actually goes forward when you pedal it, mostly, as well as something of the challenges faced by the recently awakened long-term coma sufferer. Supposedly dangerous toe clips, which I've cycled in for forty years without incident, have been replaced by pedal-and-special-shoe-interlocking propulsion systems, which prevent injury by making riding prohibitively expensive; everything on the modern bike can be repaired with an Allen wrench, meaning you can't buy a cycling multi-tool for your emergency bag that doesn't contain seven items your tenspeed relic doesn't need; and bike mechanics are all too young to drive. So far I've spent about what I bought the bike for in maintenance and safety--that's without fixing the brakes, yet, but I really don't use 'em--which led to the following:

DR: Forty bucks for a helmet! I rode for thirty years without ever thinking of a helmet!


There's plenty that's good, and cool, as well, and the internets are full of helpful advice and amateur repair theatricals, but clothing, fer fuck's sake, you cannot buy a cycling jersey that doesn't look like the hood of Dale Jr.'s Sprint Cup car. Or "cor", as they say in the announcer's booth.

And the roads and the traffic are worse, or I'm much older, or both. The tally so far is two flats, neither really explained--I have learned to repair and remount a tire, which may not seem like much, but try doing it in the grip of congenital schlemielity--two permanently tingly thumbs from riding over cobblestones disguised as asphalt roadways, and a taste of sidewalk the other afternoon which I tried to blame on my Poor Wife stopping short in front of me, but was actually poor braking technique combined with no brakes. Not even enough rash to wear as a badge. But it reminds me that this is the coolest tattoo I've ever seen: 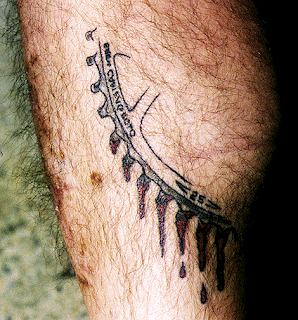 So yesterday, after flat #2, I went looking for bomb-proof tubes, which none of the local shops stocked on the grounds, I guess, that it reduced the number of flats they get to repair. And I didn't find any ("We can order 'em for you," said one young shaver. "Thanks, I don't know what I'd do otherwise," I muttered.) so I bought a standard tube and came home and went to replace it, which is when I discovered that the bead jack I avoiding buying was absolutely essential on the grounds that my bike now uses tires which are the teensiest bit small, thanks to all the modern inconveniences such as the goddam Balkanization of tire sizes I'd missed out on up to now. So I went back and got one, and came back home. I was set up to do this from the living-room couch. My Poor Wife sat down beside me, because, speaking of tingly things, she just really enjoys watching sweaty and swearing men accomplish things with their brawny arms, another reason, if one were needed, to question how she wound up with me. And the bead jack didn't know anything about my Karma, apparently, because it performed flawlessly, and the thing was done in like two minutes. I set the wheel aside, and had a sip of coffee, and heard a weird sort of noise coming from my nether regions. This, lamentably, is not really all that odd. I thought at first it was just a peculiar stomach rumble, but there was a weird sort of squeaky component, a sort of rubbing leather or plastic sound, and I checked my belt, and the contents of my pockets, but couldn't find anything. I stood up and shook myself. Nothing. I sat back down and it started up again. I'd sort of decided to just ignore it. Had another gulp or two of coffee, stood up, and out a leg hole fell a Great Black Wasp, S. pennsylvanica, aka a Cicada killer.

It's "non-aggressive", says WikiAnswers. Like you gotta tell me that.

A couple of thoughts...As protection from flat tires, get your hands on some duct tape and line the inside of the tire carcasses with it. About two thicknesses should take care of most road hazards. If you want to change the flats yourself, invest in a spring-loaded wooden clothes hanger, disassemble it, throw away the spring, and use the rest as a tire iron for pulling the tire off the rim. Never try to "true" the wheels yourself because you'll really screw the pooch if you're anywhere near as unhandy as I. For revenge against automobile drivers carry either a pocket full of good throwing rocks (not advised) or a boat airhorn. With the latter the trick is to sneak into the offending driver's blind spot and cut loose a blast. Normally the driver swerves to the right into the neighboring lane as you pedal blithely by.

Lightweight and el cheapo tire liners to prevent flats: go to the Post Office and rip off a couple of Priority Mail envelopes--the kind that are made ot Tyvek. Cut them into strips and line your tires, then place your tubes and mount. Tyvek is not particularly hard to cut, but it's remarkably puncture-resistant.

quit your whining and order some crap from either rivendell (rivbike.com) or velo orange (velo-orange.com) -- both cater to retro-grouches, and the latter tends to be less expensive.

if you get kevlar tires (in, presumably, the 27" size) you will die before you have more than 5 flats, and before you wear them out. the tires keep you from having flats, not the tubes.

also, you should be patching tubes, not buying new ones. it's simple enough.

the thing to search for if you want a non-NASCAR-esque non-spandex bike outfit is "wool".

portland cycle wear sells some decent wool jerseys, and if you dont care about the color, writing, or short vs long sleeve, you can get em pretty cheap.

That really is the coolest tattoo ever. I've never wanted a tattoo before, but I want that one.

See also the late great Sheldon Brown's pages for everything bike related. Having tires that are wide enough helps a lot both with comfort and flats. In 27" this means the widest you can get, 27x1 1/4. In 700c this means 28,,32, or even 35mm.
One of the many nice things about older bikes is that they have room for wider tires appropriate for real roads.

Ditto on the tattoo.

And ditto on the late, great Sheldon Brown. I've been a "serious" cyclist for 40 years and have worked in a bike shop for the last 6, yet Sheldon saved me no small amount of grief on my conversion of a 1972 Raleigh Supercourse into a single speed commuter.

I ride a lot, but mountain bikes (I live in CO, so it goes with the territory). One more bad wrist injury means the end of my current career, so I've never transitioned to clipless pedals; every spring I watch several people brake to a stop and then fall over when they can't get out of them.

I use a toe clip that is basically the toe part, but no straps; $8 at Bike Nashbar or Performance, online only - no one wants to be as dorky as I am but who cares).
They work fine; just enough to push forward against and easy to get out of when needed. We just finished an unsupported hut to hut ride from Telluride to Moab, and since I can use regular shoes in those clips, I didn't have to add a spare pair of shoes to the pack/pannier I was carrying like everyone else had to. On a trip that long, weight matters. A lot.

tinglies - I wear fingertip-free weightlifter gloves; the padded palms at least slow down the onset of tingliness

traffic - assume everyone is an asshole and out to get you; at least you see it coming more often

wasps - at least you had your mouth closed!

My Poor Wife sat down beside me, because, speaking of tingly things, she just really enjoys watching sweaty and swearing men accomplish things with their brawny arms,

"Had another gulp or two of coffee, stood up, and out a leg hole fell a Great Black Wasp, S. pennsylvanica, aka a Cicada killer."

Jesus, man, forget about the bike and get that leg looked at. If you have giant wasps coming out of a hole in your leg, that should really be your priority. Probably. Depending on the circumstances, of course.

REI will sell you a plain grey or black cycling jersey.

Ditto on the wider tires. When I was a messenger I had many flats. It was the staples - downtown streets are lousy with 'em - tiny shards that would hide in your tire and give you three flats in short order until they were painstakingly located and removed by tweezer. Now I ride for exercise and errands and haven't had a puncture for a couple of years. (Of course, writing this, I've offended the cycling gods. Better bring a spare and a pump next time out.)

Check Target for sports jerseys. My buddy and I got some good (for) riding solid color jerseys there for less than twenty bucks. They didn't have those pouches in back for your water bottle but they didn't cost $90 either.

And I don't know if you skinny tire guys can go tubeless but I converted about six months ago and haven't had a flat since.

Oh, and. Get your brakes fixed.