SEPTEMBER 3, 2012: The Indianapolis Star, you should pardon the expression, publishes a puffy little piece about how Purdue, the Ag college in West Lafayette, has upgraded the office of the President, about to be occupied by diminutive Indiana governor Mitch Daniels.

September 4, 2012: Diminutive Indiana governor Mitch Daniels announces, in his best PR petulance voice, that he's shocked, Shocked! to learn an organization that would have someone like him as a sinecure would even consider spending large sums of money in a way that made Mitch Daniels look bad to Mitch Daniels.

Fer cryin' out loud, they spent $300,000 of University repair funds to update a place that looks like it's barely been vacuumed since the late 70s: 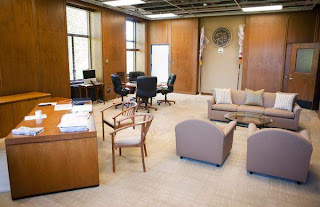 Although, if you've spent much time at Purdue you know this qualifies as "Way-out European styling."

Among the extravagances Mitch supposedly--in my relative youth I figured that no one would ever touch Ronald Reagan when it came to requiring "supposedly" in front of his "achievements"--pulled the plug on was an upgrade to the office's computers and videoconferencing equipment, removal of "decades-old" wood panelling, bringing the bathroom facilities up to Federal accessibility standards, and replacement of the office carpet, which was so old Earl Butz designed it.

Not really. I just think Earl Butz and Mitch Daniels should now be joined forever.

Anyway, we say "supposedly" pulled the plug, not simply because anything that comes out of Mitch Daniels' mouth is suspect, but because the original story noted that work had been completed last week.  That is, about a week or so after Daniels was reportedly given a tour of the new digs by acting President Timothy Sands.

This, in case you were wondering, is the same Penny Pinchin' Mitch who wouldn't move into the Indiana Governor's Residence until it was renovated (through private donations, of course), and then didn't move into it anyway. He's the same Mitch Daniels who said of the almost $200,000 in campaign contributions from Republican financier and outright thief Tim Durham, that he couldn't return the money because it had already been spent. (Bankruptcy trustees for the un-ironically named Fair Finance did manage, just this year, to squeeze $3000 out of the Governor).

But my favorite part of this story is how it was stovepipes reported by Jim Shella of Channel 8, the Dean (Broder) of Indiana political reporters, who closed his recitation of a story he would have known to be false had he bothered to read the previous day's paper by saying that the Purdue community ought to have known what a sharp-eyed cost-cutter they were getting.

This, really, is precisely how Randian Republicans manage to move mountains, ain't it?

Jeezus, what sort of Ob-Com wraps their flags in plastic?

Is your picture before or after? Its hideous. I'd be annoyed too if someone said they'd redecorated it just for me.

Shouldn't there be some cow heads or something on those walls?
~

I would have thought that 1/2 scale furniture was less expensive than that.

I truly hope that was the 'before' picture.

And let me be the 99th to add, your anti-spam thing sucks.

$300,000 sounds like a lot for renovation, but there's quite a bit of padding added to anything done in a university setting. At the university where I work, we wanted a six-foot opening cut in a wall. An electrical outlet had to be moved, but it was in a raceway, and the tile floor had to be repaired. Drywall and painting was also done. $5000 for work that took place over three or four days, but often just for a couple of hours each day. So it's not hard to see how one could spend $300,000, especially if a bathroom reno was involved.

Of course, none of that provides evidence that Mitch Daniels isn't a putz.

Wait till Our Bitch Mitch springs it on them that Purdue has to lease/buy a helicopter for him to use on his daily commutes between West Lafayette and and the Daniels Ancestral Home in Geist Lake.

What? The governor's mansion, even renovated wasn't good enough for him and Cheri, what sane person would believe he's going to move to Westwood on the edge of campus?