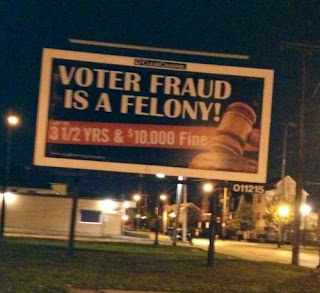 THE Freedom Defenders at Clear Channel have announced that dozens of the above billboards will be removed immediately, since the Freedom Defenders at Whatever Anonymous Family Foundation Which Was Accidentally Permitted To Fund Them Contrary To Clear Channel's Own Rules has--wisely, we think--decided it would rather remain anonymous than further its voter education efforts in the open.

The billboards have been erected in Cleveland, Milwaukee, Columbus, Ohio, and elsewhere, in what the headline writers described as "predominantly poor neighborhoods", which is the faux-balanced way of pretending the targeting might not have been racist.

And, since our own No Preteritio policy is enforced by the same legal team that vets Clear Channel Outdoor Holdings' contracts, we're not going to mention that the odds of Clear Channel accidentally contracting to put up anonymous political billboards targeted at You Know Who are identical to the odds of Clear Channel accidentally revealing the name of the foundation in question. It's just math. Contracts are hard. I'm sure they don't understand what they're signing half the time.

But may we just mention, now, how the Republican voter suppression--sorry, voter fraud suppression--routine--you'll forgive my assumption about the anonymous foundation's political leanings, contrary to this blog's practices--underlines the fact that these rich bastids and their rodential henchmen don't know the first fucking thing about real people? Good Lord, the idea that poor people really imagine that stuffing a ballot box would make things better for them! How far removed from reality do you have to be? Isn't this, really, at the heart of our national "debate" over the superior personhood of corporations? Sheesh, just look at the sorts of people who run them.

Labels: Commerce
Email ThisBlogThis!Share to TwitterShare to FacebookShare to Pinterest

bjkeefe said...
This comment has been removed by the author.
10:20 AM EDT

It's not that the GOP thinks poor people are going to rise up, en masse, and vote for the other party. It's that the GOP knows, deep down, that their platform does not actually represent a majority point of view, and so they look for every edge they can get.

Whenever I hear about vote fraud, the voter is a well-to-do white person. Wouldn't it be cool to see the same billboards in gated communities and high end suburbs?

I hold a faint hope in my innocent, look on the bright side liberal heart, that some of these suppress the vote, scare the people, tell your employees how to vote if they know what's good for them, make voting as inconvenient as possible efforts just might boomerang on those who are behind them.

If there's one thing Americans dislike, it's being bullied and pushed around. Just maybe, a few folks who hadn't even planned to vote may show up at the polls and vote for our guys, just out of spite. Nobody puts baby in a corner!

"Obviously, if any one racial group views this sign as racism, they are probably very much involved in voter fraud."