Stand Up And Say That 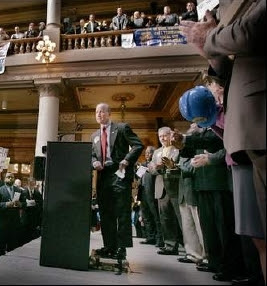 
WASHINGTON -- Republican frustration over the election defeat of Superintendent of Public Instruction Tony Bennett boiled over into the public this week with Gov. Mitch Daniels claiming at an education reform conference here that teachers used illegal and improper methods to oust Bennett.


"If you're a fan of anything-goes politics, it was a creative use of illegal -- but still creative use -- of public resources," Daniels said Wednesday at a Washington, D.C., meeting of the Foundation for Excellence in Education, a group led by former Florida Gov. Jeb Bush. "We got emails sent out on school time by people who were supposed to be teaching someone at the time, all about Tony Bennett. We have parents who went to back to school night to find out how little Jebbie is doing and instead they got a diatribe about the upcoming election."

If you're scoring at home, and I hope you are, that's one-time Indiana Governor Mitch Daniels, still on company time [as he has been for the last four years, during which he 1) spent two and one-half years running for the money to not run for President, then 2) spent the next year ducking a subpoena in the IBM/FSSA billion-dollar boondoggle, on the grounds that as Governor he was Constitutionally protected from having to tell the truth, before 3) lining up employment as President of Purdue, after a rigorous selection process conducted by people he appointed], complaining that public school teachers illegally defeated his henchman Bennett. From six-hundred miles away. Before picking up his award (though it's dollars to doughnuts his fee cleared a couple weeks ago).

We're sure, though, that he's got solid evidence of this illegality, right?

Asked if the governor has proof of the illegal activities, spokesman Jake Oakman said the incidents "were rather well known during the campaign" but offered no specifics.

Oakman said the Indiana Republican Party "received a number of complaints from parents about the personal attacks on Dr. Bennett during the election."

He referred to the state party the question of whether any action was taken to investigate the claims.

In other words, No.

Indiana GOP spokesman Pete Seat said the party received copies of emails about the election that were sent by teachers from school accounts. Seat said the party did not take action because those who provided the emails simply wanted the GOP to be aware of them.

Asked if the emails were a violation of state law, Seat said they were "certainly inappropriate."

Now, first, kudos to Maureen Groppe for climbing the chain of bullshit here, and to the smoldering crater where once stood Gene Pulliam's flagship paper for actually allowing it, (and other questions about Daniels' pet projects, now that he's safely away from needing votes). But the issue isn't whether these people have something to say in reply; it's that they don't have anything to say in reply. Daniels didn't say "certainly inappropriate", which wouldn't have been nearly petulant enough to earn him his trophy, though it's just as inaccurate.  And this is the state, and the party, so concerned about voter fraud it was the first in the nation to chase its Voter ID law all the way to the Supreme Court. (We have, as a result, learned of three cases of vote fraud: Charlie White, Richard Lugar, and Richard Mourdock, although only the first can actually be called "criminal" by someone who observes the niceties.) Why aren't the State Police on the case?

Maybe because "using your professional email account to send email" isn't, um, illegal? Nor is "personally attacking" Tony Bennett a felony, unless you use a hatchet (if you use a gun it's a Second amendment exercise). If parents were unfairly harangued about Bennett at what they thought were school conferences, they should have complained to a) the teacher, b) the principal, and c) the superintendent. Or at least given the GOP permission to use their names.

This is Mitch Daniels, by the way, the man many puditologically-inclined Republicans thought should get another crack at the Federal budget. When he controlled the sluice gates he was quickly surrounded by people who managed to keep his natural, Randian inclination to slime everyone and everything that begged to slightly differ with him. Not that he's reduced to the D list he's back home in the bicorne. His opponents are "dinosaurs", opponents of a progress so clear it never has to prove itself, or provide any evidence. Just like th' Guv'ner hisself.

Why is it that whenever I consider Daniels' latest public utterances, the words "trenchant" and "acerbic" come to mind, only to emerge from the mouth as "snide little shit"?

If anyone has the means to communicate with Chris Matthews, would you please let him know that this reasonable "act" is just that. I'm sure Jane Jankowski is having a fit as she normally keeps the governor on a short leash.

Was that what you meant to type or did you mean "short governor on a leash"? Cause that works too.

This the same Mitch, Bush's budget director, who estimated the cost of the Iraq war at $50 billion?

Oh, I get it, he´s a bad governor because he´s short of stature. Ha ha! Good one!

Seriously, there are plenty gazillions of inoffensive reasons to mock Mr. Daniels. His height is not among them.

My favorite is still the episode from early in his tenure, when he was using RV1 -- that ridiculous campaign vehicle that he "donated" to the state so he could keep using it -- at political fundraisers.

But somehow his handpicked, appointed ethics investigator found a way to clear him...