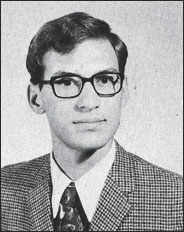 Characterize (or smear) Sam Alito, who is beleagured Dubya's latest, uncronyist pick for the Supreme Court with whatever disdainful moniker you like, but it still doesn't change the fact that his sort - the undersung and often-scorned Traditional Catholic Male - seems to be carrying the day. So what's the big whoop about these men who toil assiduously in their eager-beaver professions, early-to-bed, teetotaling types who live in gelato-free suburbs, where they bag their own groceries at the local ShopRite (as Alito has evidently been spotted doing) and prefer the tried-and-true uniform of a shirt, tie and (sometimes unlaced) lace-up shoes?

Well, for one thing, the recent ascension of this quiescent type in the form of Patrick Fitzgerald, John Roberts and Sam Alito has demonstrated that being grown-up and resolutely square has its advantages, including the ability to keep your randier impulses in check and your repression control set to high. For another, the visibility of this trio suggests that the more principled-seeming aspects of the Republican franchise - what were once billed as prudent but compassionate values - are not entirely in tatters. In an era of packaged personalities and political philosophes on the order of Bono and Angelina Jolie, these guys tend to trust their instincts, pointedly old-fashioned or conservative as they may be, instead of fretting about projecting the correct image to bloggers and Jon Stewart devotees. These fellows may be shy or awkward, but they are relatively at ease with inhabiting themselves instead of the GQ-mandated version, where life is lived in the eye of the hipper-than-thou beholder.

Oh, joy! The grownups are here to save us! Again. (Okay, I probably should have warned you to put on your waders before attempting to cross that paragraph.)

And we got there from one of those sidewalk psychoanalyses that send me rushing to find the author's DOB, an exercise that inevitably uncovers the fact that she sussed out the deep symbiotic relationship between fashion and politics in the late 60s/early 70s while watching Saturday morning cartoons and working on her 12 times table. See if you can spot the Dead Giveaway:

Lord knows, you have only to take one look at Sam Alito's college yearbook photo, Princeton class of '72, to spot all the fateful symptoms, the revealing semiotic trail of blatant uncoolness, even if you didn't know that he was a Nixon supporter and an R.O.T.C. recruit at a time when campuses across the country were jumpy with activism. First, consider those totemic Clark Kent glasses, a sure giveaway of hopeless doofusness when everyone was on to Warren Beatty-imprimatured aviators. Then there's the ear-clearing hairstyle, which looks as if a mother had lovingly combed it, not to mention the lack of character-obscuring sideburns. And what about the set of the jaw, which appears pleasantly determined but not uncompliant, as if this guy actually believed people over 21 might have some wisdom to impart.

Did you catch it? Want a hint? Google "Warren Beatty" and "filmography".

Yes, I entered college in 1972, many hundreds of miles from Princeton and admittedly in the vast cultural backwaters between the coasts, but the only guy I knew who wore aviators was...an aviator, and the only guy I knew who looked to Warren's cultural imprimatur was...nobody. He was the star of Bonny and Clyde, Mickey One, and McCabe and Mrs. Miller, and I don't remember him wearing shades in any of those. In fact I don't remember anybody's fashion sense being particularly influenced by any movie idols in those days. I remember that in high school a few guys who'd been sporting 1964 Beach Boys surfer bangs wanted to upgrade to a Peter Fonda Easy Rider 'do, and I myself had one of those refueller's jackets, but that was because I found it at the surplus store, not because I was mimicing Steve McQueen.

By the turn of the decade everybody in the Corn Belt was wearing prole chic: workshirts, jeans, and boots. Shades were for the beach, and we don't have many of those. Too Rat Pack. Shades didn't return as a fashion statement until the Fonzie Generation grew up. I do remember seeing a guy wearing a guy wearing a pair of ELTON glasses once, but I think it was at a Halloween party.

I'm not being flippant, and I'm not just gathering nits for the protein they provide. Despite her protestations, Merkin's reading belongs to her own, ten-years-after, imaginings. If she looked at my '72 yearbook she'd find that 80% of my male classmates looked like that. And granted, that's the Middle West, and that's high school, but isn't high school the last time anybody's concerned about that sort of thing? I don't recall sniggering about anybody's fashion sense in college; I had better things to do. There were plenty of Alito-imprimaturs around, and they covered the entire political spectrum. The reason we make pronouncements now about "nerds" (the word was not current in those days; I remember the first time I heard it I thought they were saying "Nerf", the popular indoor-football material) is precisely that we know he was a Nixon-supporting ROTC recruit. Though we might note that his brave authenticity did not translate into volunteering for combat in Vietnam, or even joining the regular Army.

No, it's not the sloppy history of hemlines business, it's the continued reliance on a cartoon view of the Sixties as a Parable for Our Times that irritates me. Vietnam was never as unpopular in the polls as Iraq is now, and we were shipping home 1,000 casualties a week. It's long past the time that people like Merkin understood that you don't get a 50/50 split in public opinion without a sizeable portion of the Young being on the Pro side. It's past time to acknowledge that the current understanding of the "counterculture" of the Sixties owes much to the views of the Right as to the Left. And the length of one's sideburns had very little to do with it.
Email ThisBlogThis!Share to TwitterShare to FacebookShare to Pinterest

Excellent and absofuckinglutely. It's the Forrest Gumpist view of the Sixties — it was either all toked-out stoners who were like, against the war, man because...you-know... huh? or clean-cut future Alitos ready to be grownups to the eternal boomer adolescents. Cartoon view exactly.

And while I'm ranting, since when did this kind of hyper-adjectivism (I made that up)...
gelato-free suburbs
GQ-mandated
totemic Clark Kent glasses
Warren Beatty-imprimatured aviators
character-obscuring sideburns

...become a style of writing endorsed by anyone with a brain, no less the NY Times? Homer she ain't. Character-obscuring sideburns? Are ears the repository of one's character? Is this kind of "hey it doesn't have to make sense just shovel it out there" blather what they teach in creative writing classes these days?