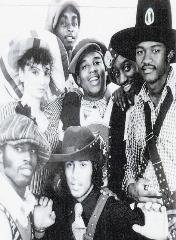 Joining David this week are Toni Basil, Fred "Mr. Pinguin" Berry,
and the rest of the Multiple Reality Syndrome Dancers

Here's the thing about Brooks: when I read the Sunday I know he's back there, like a deli container of bad tuna salad that's migrated to the back of the fridge and you know will go toxic at any moment. You'd like to ignore it for a day or two longer, like maybe somebody's gonna decide to eat it--yeah, right--and you won't have to dump the thing down the disposal followed by a baking soda and vinegar douche. You know it's gotta be done, and the longer you wait the worse it'll be, but there's always that tiny hope.

Sometimes the headline'll give you an out, but no such luck today. You just know that "Multiple Reality Syndrome" not only doesn't refer to the Bush administration's talent for brachiating through "Reality's" lush canopy like a lust-crazed gibbon, but that in fact the administration will be the one entity which doesn't suffer from the disease, and in fact will be valiantly trying the cure the rest of us. Sure enough, by the time it makes its entrance, in paragraph three:

It's been interesting to watch the Bush administration grapple with these ambiguities, contradictions and dissonances. When the war first began to deteriorate, the Bushies exuded what Packer calls a "theology of confidence." The president felt he had to display resolve or his team's morale would suffer. Public speeches were relentlessly positive, even to the point of fantasy.

So, "Multiple Reality Syndrome" is the condition that obtains when "reality" is complex, multi-faceted, obscured by shifting shadows, ambiguities, and half-truths; roughly the equivalent of what you or I encounter walking down the average street on the average morning, excepting it generally doesn't cause us to blurt out contradictory statements every few feet in the hopes that something we say might sound believable. It's interesting to watch as the Bush administration grapples for a handle on this wholly unexpected set of circumstances.

'Cause, you know, under the rules of "Ordinary Reality" we'd still be digging out from underneath all those garlands. When the expected "reality" didn't materialize, the administration was forced by circumstances to insist that everything was Hunky-Dory; otherwise, Bad Mojo could have taken over:

Administration officials felt compelled to assert a mastery of events they plainly did not possess. Sometimes I'd come away from off-the-record conversations and background briefings feeling my intelligence had been insulted, because even in private, officials would ignore realities that were on newspaper front pages....

There was a vast gap between the eighth-grade level of some public statements and the graduate-school level of private White House conversations. It was about this time that a bewildered newcomer to the Bush administration interrupted an interview to ask me why I thought there was such a big difference between the probing and realistic President Bush he would see in the Oval Office, and the pat and repetitive Bush he would see at press conferences and on TV.

Well, as you might expect with so much MRS going around and only enough vaccine for selected administration officials and their friends in the mass media, bewilderment is pretty rampant. For example, I just got a touch of it wondering how it is an opinion writer for the New York Times had an inside view of the conflict between the simple-minded-to-the-point-of-insult public pronouncements of the Bush administration and the gripping, highly nuanced, Hobbesian, even, discussions which were going on in the Very Nerve Center of the Free World, yet he never once seemed to write about it, or even mention the disconnect, let alone criticize the junior-high rhetoric as long as it seemed to be working.

I still wouldn't say deliberation is this administration's strong suit.

Just for the record, what is?

Nor is it really possible for anybody to fully understand reality in Iraq, where nothing is as it seems and the myriad of local conditions often don't cohere into one national picture.

Dave, here's a funny little story for ya. Back in the USENET alt days I was having one of those interminable arguments with one of the AOL idiots who'd just gained access to the internets. Part of the argument revolved around the tying of a knot. I'm a backpacker, and in my youth I did a little rock climbing and rappelling. You learn a thing or two about knots when you depend on them for your continued breathing. My opponent had no notion of the world of knot-tying beyond what you do to your shoelaces. I patiently tried to describe just what was what--it's not easy to convey the tying of a complex knot without pictures, so I was extra careful and serially redundant in my explanation. My opponent, now more like my tormentor, was unconvinced. She took herself off on an AOL-powered ride to the Web, where she found some knot-tying site and cut-and-pasted an explanation back to me. Not surprisingly, it was precisely what I'd told her two days earlier.

So the lesson here, Dave, is this: It took you two-and-a-half years to admit that the situation in Iraq was not, in fact, cheery and rosy and gosh-darned just about bringing democracy to brown people. So kindly do not try to tell the rest of us now that the whole thing is just too complex for coherence. It's one of the finer points of rhetoric, I know, but it's never too late to learn.
Email ThisBlogThis!Share to TwitterShare to FacebookShare to Pinterest

Riley, if I wasn't already in love, the gibbon thing would have done it.
As it is, I find myself listening to Scruffy the Cat's "Moons of Jupiter" a lot lately, and for some reason I can see Bush standing in the Oval Office, blankie and teddy bear in hand, declaring that only friendly dinosaurs can read his books.
It's an okay sentiment in a lot of circumstances, but perhaps not so good as a public policy pose toward Reality.

Thanks for the kind words of the Fauxcilogy Professor. They indicate to me that all along he was obviously one of the select who anguished over reality's non-conformance to models. The world let him down, dammit.

Uh, so while David Brooks was privy to all these "deep thoughts" on the part of the Court of George II, WHY IN SAM HILL DIDN'T HE BOTHER TO WRITE DOWN THOSE IDEAS TO TELL THE REST OF US?

d. sidhe stole my comment! This is one of your best analyses of a Brieney yet and that's some stiff competition.