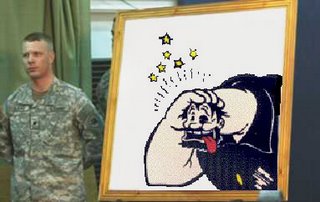 Thursday: US and Iraqi authorities jointly announced at separate press conferences the death of militant insurgent leader Abu Musab al-Zarqawi, head of al-Qaeda in Iraq, LLC. Zarqawi was killed when he survived an airstrike employing two 500 lb. "bunker buster" bombs which were fired at his compound by Iraqi police, flattening the structure with Zarqawi just inside the outside of the structure, which was located nearby, killing him instantly, after which he lived just long enough to say something that couldn't be heard to US military and/or Iraqi police personnel, who were the first to arrive on the scene after the gun battle in which they killed him shortly after he died. The above photograph was one of several displayed by the US command in an effort to prove they hadn't doctored photos of a slightly injured man just blown to bits in a building he wasn't in.

Friday: US officials today explained the apparent shifting details in the death of militant insurgent leader Abu Musab al-Zarqawi, head of al-Qaeda in Iraq, LLC, by explaining that the fog of war can be particularly heavy when you're not used to publishing stories you might wish to tell the truth about. The situation should revert to normal within the next few days, according to an official who spoke on condition of anonymity. "This had us back on our heels for a time," the official admitted. "After all, we just killed a guy that until a few weeks ago we thought we'd invented. Which you gotta admit can be a little disconcerting."

"After all, we just killed a guy that until a few weeks ago we thought we'd invented. Which can be a little disconcerting."

But what is getting lost in the media and the government's euphoria is that it was the incredibly misguided US invasion that rose Zarqawi to prominence. It transformed him from a virtual nobody in Islamist extremist circles into a leader of their movement.

It gave him an open field to perpetrate his heinous crimes. So for the US military and Bush to keep beating their chests is dead wrong. Their actions created him, and then they had to take him down. In the meantime, this butcher killed hundreds of innocent Iraqis and foreigners.

... were there no invasion of Iraq, Zarqawi would still be the petty, obscure thug he was before March 2003.

Brilliant.
I could swear I heard this from one Pentagon wag:
IAbu Musab al-Zarqawi was killed today. As Brooke Shield once observed, "When you're killed, you lose an important part of your life." In Mr. Zarqawi's case, we are reasonably assured that this part would be wat is commonly known as "the rest."

Best summary of Thursday's events ever!

This would be funny if it weren't so close to the truth.

kathyr: My favorite summary came from Dear Leader when he said something like "This killer won't kill again." His second-grade reasoning skills always floor me.