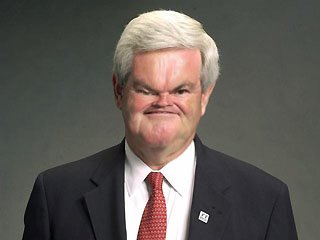 "The honest answer is yes," Gingrich, a potential 2008 Republican presidential candidate, said in an interview with Focus on the Family founder James Dobson to be aired Friday, according to a transcript provided to The Associated Press. "There are times that I have fallen short of my own standards. There's certainly times when I've fallen short of God's standards."

So What Did We Learn? That Gingrich's campaign, sorry, potential campaign staff learned that somebody had this. Can't be a Democrat--who would possibly care at this point? I'm lookin' at you, Mitt.

Alternately, maybe Dobson asks all his interviewees about their extramarital histories. I can't say, personally, since the only one I watch is his Pre-Oscar telecast.

Gingrich argued in the interview, however, that he should not be viewed as a hypocrite for pursuing Clinton's infidelity.

So What Did We Learn? That even after all these years, shorn of his ability to speak gobbledegook or racist codewords to the Sons of the Confederacy CPAC, Newt Gingrich could not successfully argue that rain falls down.

"The president of the United States got in trouble for committing a felony in front of a sitting federal judge," the former Georgia congressman said of Clinton's 1998 House impeachment on perjury and obstruction of justice charges. "I drew a line in my mind that said, 'Even though I run the risk of being deeply embarrassed, and even though at a purely personal level I am not rendering judgment on another human being, as a leader of the government trying to uphold the rule of law, I have no choice except to move forward and say that you cannot accept ... perjury in your highest officials."

So What Did We Learn? One, that there's still no USDA limit on the amount of partially-hydrogenated sludge you can add to a wire story. Two, that God still permits people to lie to Jim Dobson without bursting into flames.

How long do you suppose Newt has been practicing that one? "Got in trouble for committing a felony in front of a sitting judge." I've seen weasels that couldn't weasel that good. What Clinton did (god I'm tired of defending that man's penis, however many admirable qualities it has) was make a false statement in an affidavit ("in front of a sitting judge"--as I understand it, few of them actually chose to stand--implies that Clinton committed perjury on the witness stand, which he did not) in a case which was later dismissed. Clinton later--after the impeachment--pleaded guilty to contempt of court. Which is not a felony. In a matter that would not have been pursued in 99.999% of already mooted cases. Despite the practiced parsing Newt still oversteps, since he couldn't avoid saying "committed a felony" despite that "got in trouble for..." Clinton stood accused of a possible felony, the act he at least tacitly admitted to could have resulted in a felony charge, but he certainly did not "commit a felony" which was then pursued by the sad but duty-bound Gingrich.

And no, Mr. Evans, the statement could not "refer to" the impeachment charges, where "felony" is not even a part of the vocabulary, and where there are no federal judges, seated, standing, or leaning against a wall, just a Supreme Court Justice. Who is, by law, required to dress like an Oxford don in a Pink Floyd movie. This has nothing to do with anything, by the way; I just like reminding people. Gingrich was pulling a fast one. You stood aside and held the door open for him as he escaped.

Widely considered a mastermind of the Republican revolution that swept Congress in the 1994 elections, Gingrich remains wildly popular among many conservatives. He has repeatedly placed near the top of Republican presidential polls recently, even though he has not formed a campaign.

So What Did We Learn? That absent USDA guidelines you may find yourself chewing mouthfuls of pure sludge, unfiltered. "Wildly popular among many conservatives"? What the fug is that supposed to mean? If we're going to quote the empirical evidence. let's, I dunno, quote it. Last I saw (couple weeks ago; I'm not gonna look up Primary horserace figures any more often than that, not one-year out) Newt Gingrich was running neck-and-neck with Mitt Romney. This despite the fact that Newt has twenty years of name recognition, some of it not involving adultery and dying wives, whereas 78% of likely voters think Mitt was "that hot shortstop phenom in the Texas league last year". This is in a race where there aren't any Wildly Popular Among Conservative names at the top. The Gingrich constituency is that segment of the Coulter Party which believes the 2006 results show that the GOP has not been sufficiently mendacious.

"There were times when I was praying and when I felt I was doing things that were wrong. But I was still doing them," he said in the interview. "I look back on those as periods of weakness and periods that I'm ... not proud of." Gingrich's congressional career ended in 1998 when he abruptly resigned from Congress after poor showings from Republicans in elections and after being reprimanded by the House ethics panel over charges that he used tax-exempt funding to advance his political goals.

So What Did We Learn? That "got in trouble for committing a felony" is not in the AP stylebook. And God's problem is that He'll listen to anybody.

Somewhere Norman Mailer, writing about prizefighting, notes the ego demands on the Heavyweight champion include that he must walk around knowing that he, quite possibly, is the Baddest Man on the planet. Does the same existential strobelight flash in Newt's skull? Is there some greater weight in lifting the head off the pillow in the morning when you know it's possible that you're the Lyin-est Scumbag to ever run for office?

Labels: Bill Clinton's Dick? Really?, Does The Media Really Need More Than One Neck?
Email ThisBlogThis!Share to TwitterShare to FacebookShare to Pinterest

I was suspicious of Newt last year when he and Hillary were running around making nice with each other. I didn't believe for a minute that he had evolved in any significant way. He is one of slimiest pieces of pond scum ever to stink up the public discourse. As much as I disliked Bill Clinton for his equivocation towards Gay Rights, Newt never let me forget that there were real enemies out there.

what did we learn? That some women will fuck anything with a dick and money, no matter how ugly or otherwise reprehensible.

Newt, the man for whom the adjective "loathsome" was invented.

GWB renounced his drinking and his drug use(?) and is now the Revered One. It seems contrition is all that is required. Newt may have taken it to the next level, however. It is such a tough call this year as to who is the most calculating candidate.

Newt holds a slim lead. I expect him next to bond with Giuliani's son, then kiss GWB with more sincerity than McCain did, and finally hold a rally with the Mormon Tabernacle Choir. I'll re-evaluate then.

Really my only response is Bill Maher's "Somebody f*cked Newt Gingrich?"