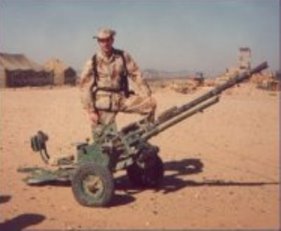 Steve Buyer and another of the Big Guns in the JAG Corps, Gulf War I

Rep. Steve Buyer, R-Ind.,...the top Republican on the House Veterans Affairs Committee...said he is concerned that the military care for active-duty soldiers and for veterans is being confused and that Democrats are using the issue for political purposes.

No, I don't know where we get 'em. I do know how we wound up keeping Buyer--he won a three-way Republican nutjob clusterama in 2002 over Freshman Brian "I Saw The Plane Hit The Pentagon" Kearns, who had chosen to fight it out in the newly-redistricted 4th, rather than continue in his old district, the 8th, the new home of John "But I Thought Congressmen Were Allowed To Smuggle Guns Onto Planes" Hostetler. Kearns actually proved too nutty even for Indiana Republicans, and the 4th proved solidly Republican, which was good news for Buyer, who had already suggested using nuclear weapons in Afghanistan provided--get this--that we prove the anthrax attacks were the work of al-Qaeda. Sure brings back memories, huh? Buyer made news again in 2003 when he wrote Denny Hastert requesting "indefinite paid leave" from Congress (!) because he'd been called up to active duty, a request made even more curious by the fact that he--how do we put this nicely?--hadn't. And couldn't, for that matter, being a Member of Congress. So he went home and spent some time getting his equipment and his story straight.

That paid leave probably explains how it is that Buyer, a signatory of the Contract With America's pledge to set term limits at twelve years found himself running for a seventh term in 2006.

By the way John Aravosis has the story of how Buyer came to be chairman of Veterans Affairs under Tom DeLay (follow the links).

(Buyer is now a full Colonel in the reserves, having received that distinction in 2004, along with Lindsay Graham, in a special White House ceremony, after it was discovered that there were, indeed, two Republicans with actual verifiable military records.)

Labels: Iraq: How Come We Only Hear the Bad News?
Email ThisBlogThis!Share to TwitterShare to FacebookShare to Pinterest

he is concerned that the military care for active-duty soldiers and for veterans is being confused and that Democrats are using the issue for political purposes.

What, did the GOP just run out of bloody shirts?