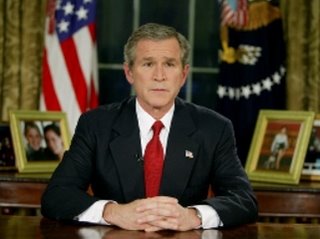 Seems to me that this is the perfect occasion to launch a new campaign. It's time to tell your Congressperson We Want Our Victory Parade!

The last Congress already allocated $20 Million, which seems laughably small when you compare it to the amount of currency we can just plain lose in the course of a few hours. I know, I know, some sticklers for detail will point out that we haven't actually achieved victory in Iraq and Afghanistan. I would answer that in these with these conflicts, and this administration, it seems particularly appropriate that the celebration of victory and the actual achievement of anything remotely resembling one be two separate, even wildly disparate, matters.

Need I remind everyone of the delicate psyche of the US service personnel? The thoughtless whisper of a Congressman 8000 miles away suggesting we reconsider military appropriations sends morale into a dangerous tailspin. Remember all those psycho Vietnam Vets on all those teevee shows in the 70s and 80s? They never got a parade!

We will, of course, need to make this an annual event, in order to make sure no one feels left out, so I think it's high time we appointed a Memorial Commission so there'll be some place to rally before the parade begins. And not one of your post-modern monstrosities like The Wall, which caused so much controversy before we all agreed it was just too depressing and refused to build it. No, something Classical, with columns and metopes and atlantes and caryatids and plinths. Lots of plinths. I'm a big fan.

The only problem I see is whittling down the hundreds of inscription-worthy administration statements: "Bring It On." "I Doubt Six Months." "A Few Dead Enders." "The Insurgency Is In Its Last Throes." "They’re In the Area Around Tikrit and Baghdad and East, West, South and North Somewhat." "A Slam-Dunk Case." "We Have Found the Weapons of Mass Distruction." "We Never Said 'Imminent Threat'." So many to choose from. And the friezes! The heroic filming of the staged rescue of Pvt. Jessica Lynch! The heroic framing of the crowd scene at the Saddam statue-toppling! Our brave defense of the Iraq Oil Ministry building while all around everything that could be picked up was being looted! The mess-hall battle for the bigger of the two drumsticks Bush was holding! The even bigger battle when they turned out to be plastic!

Yes, we're gonna need a really big monument to fully memorialize this one.

(Full disclosure: my family owns limestone quarries, but I'm sure they're willing to let Halliburton act as intermediary if that'll speed things along.)

Labels: Iraq: How Come We Only Hear the Bad News?
Email ThisBlogThis!Share to TwitterShare to FacebookShare to Pinterest

"(Full disclosure: my family owns limestone quarries, but I'm sure they're willing to let Halliburton act as intermediary if that'll speed things along.)"
Seriously? I used to buy ground limestone from Indiana back in the 1980's. Someplace called Yellow River, I believe. Was it you?

Victory in Iraq has been a rolling donut for a few years now.
Let's call it a win, have a party and bring the troops home (or reassign them to Afghanistan, the 'Quiet War'.

I want my own Dubya pinata.

...or the columns formerly known as plinths?