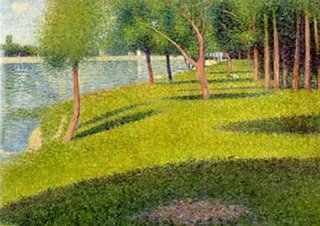 • Chicago toddles, if it ever does, at still too high a rate for my geriatric ass, and it's the least alien great city for me. I spent a lot of time in Da Region in my college days, and weeks at a time Downtown and in Oak Park shortly thereafter, enough to recognize that I'd never get the rhythms of such a place. I'm a natural Stick-in-the-Mud, for one thing. And back then it wasn't yet the case that I needed to look at my own driveway and see my own vehicle, or see stuff in my backyard I'd planted--in the ground--and I couldn't even cook in those days, let alone developing a need to know just who'd handled my food last, so all that's gotten worse. Plus now, when I do decide to have sex outdoors I'm a lot more concerned with who's watching, let alone videotaping. The Art Institute is incredible, of course, given the opportunity to see Nighthawks and American Gothic in the same afternoon, and La Grande Jatte is the closest I've ever come to Stendhal Syndrome; we should take up a collection to send Norbizness to Facets, Sam's is oenophile heaven, the food is great--if you overlook the customary placing of pizza ingredients atop a pan half-filled with doughnut batter--the skyline is too famous to mention, and all the ethnic groups love sausage.* Still, I like to get where I'm going and back within an hour and a half, at least generally, even if it's a pale imitation of those things. Is there one of those "What sort of international dance craze are you?" quizzes somewhere? I've gone from Tarantella to Bossa Nova. Stop me when I hit Minuet.

•91% of Americans tell Newsweek they believe in God. And so far as we can tell, Newsweek believes them. And so long as it's got them on the phone, why not ask about Evolution? Forty-eight percent reject it; 73% of Evangelical Protestants say Man was created in situ in the last 10,000 years.

To which we say, once again, Newsweek: Indianapolis, Indiana, USA. You're invited for Sunday brunch. But first we're gonna stand in the middle of my street for half an hour and see how much danger of being run over by speeding churchgoers we can get in.

How, exactly, do those two things get linked, and no other issue? Not belief in God and support for the death penalty for contraceptive use, or stoning adulterous neighbors, or the elimination of divorce. No Evangelical Protestant gets asked if he's given his coat and his cloak to a homeless person when asked. Evolution, but not, "You believe in God. Do you also believe in Algebra? Vaccines? Air pressure?"

•The one thing that needs to be remembered above all else concerning the flubbed serial candidacies of John McCain is the simple fact that the Press loved the guy. Bought the maverick crap and the straight-shooter shit like it was nickel beer, even though the high bullshit content was right there on the label, even though reading said label is said to be its job.

• Forgive me, I've sorta been on vacation: there's a scandal over something Keith Richards said and/or did? Did I hear that correctly? 1) Who decides these things? 2) Are we absolutely sure there's nothing to those Contrail Conspiracy Theories? 3) Why aren't Americans in their fuckin' houses of worship instead of glued to the tube for the next round of Open Mouthed Celebrity Gawk Fest?

• Thanks for keepin' the place warm.


*With apologies to Vladimir Nabokov.

Anonymous said...
This comment has been removed by a blog administrator.
1:18 AM EDT

Coming from Chicago, I try to understand your concerns about the city, but I shall never appreciate them.

But otherwise, you seem to be doing OK.

As OK as anyone can be in these close approximations to End Times we find ourselves in.

That's it. This post has finally done it for me. Will you marry me? Or, if taken, as I seem to recall you are, will you and spouse be my best friends?

Well said on the whole McCain flap. Mind if I lift it (proper credit and link to you, of course).

It seems St. John played the press for fools one too many times.

I'm still giggling over the caption.

Why aren't Americans in their fuckin' houses of worship instead of glued to the tube for the next round of Open Mouthed Celebrity Gawk Fest?

I skipped the Gawk Fest and instead watched CNN's What Would Jesus Really Do?, and so I feel that I have discharged my religious obligations for the Easter season. And for next Christmas, too.

The teev is the House of Worship, isn't it?