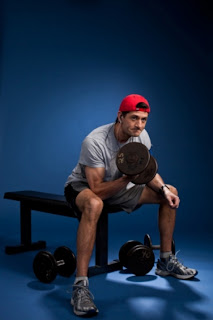 OKAY, look, I don't disparage anyone's workout program, unless it involves simultaneous phone usage or sudden dead halts on the trail ten yards in front of my bike while I'm doing 22 mph. (And the evidence suggests that both of those things are important parts of somebody's patented informercial program.)

But, really, nice legs, Congressman Stork. Did Time-Life ship the workout DVDs one per month, and you cancelled after thirty days so you'd owe nothing? And keep the free gift? And it didn't occur to you you were sitting down all the time?

You'll forgive me; I've been subjected to not one but two of Governor Schwarzenegger's book tour blabfests lately, and the man's an idiot. And I was reminded of a time when men didn't pose like this, let alone do curls all day, unless they were auditioning for Italian gladiator flicks. Joe DiMaggio didn't look like that. Neither did Joe Louis. You could barely tell that Wilt Chamberlain had muscles, and he was one of the strongest men in the world in his prime. I still don't know how Ahnuld went from laughing stock to Grade-A Hollywood beef, but I know this: it severed the connection between working out and athletic grace, and guys like you came along, guys who apparently were carried everywhere until age eighteen, and decided that doing a few sets of curls made you "buff".

You wanna work out in order to look like you work out, fine. It's a perfect match for your ideology. It's just too bad you can't use some of that Koch brothers juice to buy yourself a pair of Double Ds. And if your staff is too busy reading Atlas Shrugged to stop you from doing things like this photo shoot, well, good. But shut th' fuck up about it already, Birdlegs. Working out doesn't deserve any more praise than brushing your teeth does.
Labels: Meet the Candidates
Email ThisBlogThis!Share to TwitterShare to FacebookShare to Pinterest

You speeled "A Thousand Turds" wrong.
~

I submit that if Representative Ryan's aim in this photograph is to demonstrate what a douchebag looks like, donning the backwards baseball cap is superfluous. It's like a sprinter breaking the tape, and only then kicking it so he can beat the rest of the field to the Gatorade cooler.

Sitting at a desk crunching big numbers all day doesn't lend itself to leg presses. But the TEAM doesn't mind a few curls and some fixed resistance hand exercises around the conference table. I mean these guys are serious!

Atlas shrugged. Squatted? Not so much.

The TIME caption for these photos is this "Paul Ryan demonstrating his workout technique at a gym in Janesville, Wis., for TIME in December 2011."

I'm no expert, but from the look of it, this little Heartland™ Janesville gym has a blue cyclorama just for photo shoots, complete with several spot and fill lights and reflectors. With all the attendant hangers-on and the photographer saying stuff like "that's it Paulie, baby, make your muscles hard for me..." it must have been quite the circus.

And he has crappy form

22mph? Perhaps kph? Does the exercise perhaps defocus yer eyes such that a single 2 is... doubled? Or are we (you in this instance) talking the magic of Bionix?

In this case a picture is worth one word. And that word is: "douchebag".

In defense of "bird legs" it's hard to fit a leg day in when your legs are exhausted from cycling too much. And unlike Indiana, we actually have hills to climb out here in California, so! (j/k)