Petards Are For Hoisting

HERE'S the thing about D'ines'h D'Souza: he found himself a nice little sinecure in America defending the Raj. That comes with a price, of course. Not in swallowing the understandable anger and disgust the Anglo-American Man's Burden must engender in its erstwhile subjects; that sort of thing seems to go down easy with second or fifth-generation mandarins. It's just that, inevitably, someone with D'Souza's rh'torical gifts has got to figure (and rightly so) that These People Are Dumb As Stumps, and go looking for further fields of plunder.

Lacking Hitchens gifts, D'inesh had to settle for life as a Toolbelt to the neocons, and pan for gold among the evangelical dross, jettisoning his Catholicism somewhere along the way. Sorta.  (Again, fortunately for D'Souza, in those circles one can now be a best-selling Christian apologist without taking sides on the Reformation, which has apparently been relegated to the intellectual dung pit alongside the Trinitarian debate, the question of translation, and the George W. Bush administration.)

However, as you probably already know, this seems to've gotten D'Souza in a spot of bother when some of the more morally inflexible members of the flock objected to his apparent dalliance with his new, mid-twenty-something "fiancée".

Finally, near 11 p.m., event organizer Tony Beam escorted D’Souza and Joseph to the nearby Comfort Suites. Beam noted that they checked in together and were apparently sharing a room for the night in the sold-out hotel. The next morning, around 6 a.m., Beam arrived back at the hotel and called up to D’Souza’s room. “We’ll be down in 10 minutes,” D’Souza told Beam. D’Souza and Joseph came down together, and Beam took them to the airport.

This information eventually gets to Warren Cole Smith at World ("Todays News/Christian Views"), and all H-E-Double-Hockey-Sticks breaks loose. Yesterday D'Souza resigned from his post as President of Kings College (Manhattan) after its board met for two days drafting his resignation. ("So it could move on," of course. Nothing to do with his time in the limelight.)

Then, of course, began the CYA Tour (FOX, Christianity Today); one wishes at such times to have Jesus's super-hearing, or ability to change into a fly on the wall, in order to've checked in on the rebranding efforts. ("Look, it's not too late to change your name to Bobby.") D'Souza came out swinging, calling Smith, World, the event organizer, the attendant event-roving moralists, and the hotel night clerk a pack of liars out to destroy his career. Because that's what Christians do; the Bible tells 'em so. Oh, wait, I mean "Conservatives".

The really fun part of that was his interview with CT:

When CT asked D'Souza directly for his response to charges of infidelity, he responded: "It's absolutely not the case that [pause] . … Look, the issue here is that World is attributing to me an admission that I never made—is attributing to me a quotation that I never said. That to me is the problem. … They are just claiming based upon my non-assertion that I did something that I didn't do."

There's also this bit for those of us who're terminally amused by the work of theologians:

D'Souza, a former CT columnist, said he did not know that Christians generally do not approve of engagements prior to divorces being finalized.

"I asked a lawyer whether there was anything wrong in being engaged while separated but prior to being divorced," he said. "I was told there's no problem with that and actually that happens all the time. I proposed to Denise and we became engaged."

"I believe I have good biblical grounds for divorce and was going through the legitimate process," said D'Souza. "The thing I will admit: I did not have any idea that it is seen as wrong in Christian circles to be engaged prior to being divorced even though separated. … That was a true error of judgment, but it was truly a case where I didn't know better."

The man was raised a Catholic. I guess that means he'd be more familiar with the etiquette of annulments.

Anyway, look: when you were thoroughly intellectually depantsed by Stephen Colbert it was a warning to invest soundly and keep your head down.

Just too much money to be made on the Obama: Voodoo Anti-Colonialist trail, I guess. Well, we're not morally judgmental in these parts, or not so much, but we do like to get to the truth, Dinesh. So, Exhibit A--that thing on your head: 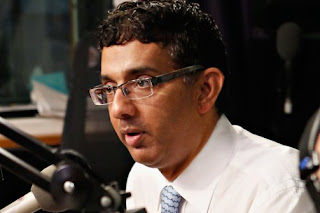 Totally doing her, weren't cha? Jumble up your theology anyway you like, it's still a sin to tell a lie.

I don't give a damn about that little weasel, but I really do wonder why the hell he ever agreed to appear on the Colbert Report ;-)

Old Dinesh has been on the Wingnut Welfare since Reagan, dutifully paid to produce reams of work extolling the virtues of Imperalism and the perils of liberalism.

The fact that any woman in her right mind could mate with this fucking mutt totally blows my mind.

@Cato : You obviously don't know many men pulling down $ 1 million per year.

Yet another reason to appreciate the genius of Stephen Colbert.
~

"Just too much money to be made on the Obama: Voodoo Anti-Colonialist trail, I guess."

Indeed. That's the nub of it all, right there. That's the thing, the issue, the disease that ails American politics.

Too much money in hatin' on the opposition.

So, we export Little House on the Prairie and the jihad will be called off? I smell Peace Prize.

Cato, what on earth makes you think she's in her right mind?

"alongside the Trinitarian debate, the question of translation, and the George W. Bush administration"

You mean the question of transubstantiation, I hope?

Quaker in a Basement said...

Either he's unfamiliar with Matthew 5 or he's making a rather unseemly public accusation.

I was so hoping Joseph was a guy. What a disappointment.

He'll be rehabilitated within a year -- two at the most.

He'll be rehabilitated within a year -- two at the most.
The odious gnome and unconvicted felon Ralph Reed just showed up on my teevee on one of the Sunday blabfests as an expert, i.e., they gave him the opportunity to slime Obama. D'Souza doesn't operate at Reed's level of iniquity, but if that twerp's comeback is any indication, I'd say D'Inesh will be all cleaned up by next Tuesday, and the wingnut welfare won't ever stop.

I'd pay good money to see this happen to Mike Pence.