Olio: And The Definition Of Contemporary American Optimist Is Someone Who Believes Things Are Only Getting Worse Edition 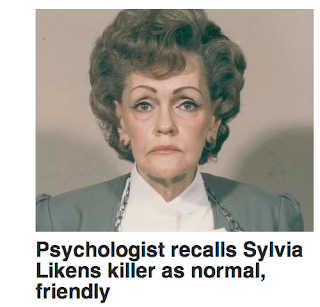 •Hey, we always knew they didn't lock up enough people in the Likens case:


[Eighty-seven-year-old psychologist Edward] Strain is not surprised Paula Baniszewski changed her name after the murder. Asked if he would do the same, he replied: "Oh hell yeah." Several surviving jurors from the case also agreed this week.

"I think she needed space to move on frankly," Strain said. "She wanted to live."

They caught up with Paula  this week, forty-seven years later, working in Iowa as a teacher's aide for the last fourteen years. Seems she'd left "Felonies? Well, there was that one time I helped torture a sixteen-year-old girl to death in Indiana, but I did my three years" off her job application.

Some anonymous tipster phoned police. Someone who couldn't live with the knowledge anymore. Someone unlike Paula.

She'd been registered to vote in Iowa for the last fifteen years. Quite possibly feloniously; I'm sure the state's Republican majority will be chasing that one down with vigor. This blog's No Praeteritio Rule prevents us from mentioning that Paula was herself a Republican.

We don't have a rule against linking to ourselves, though, so here's my piece on the fortieth anniversary of the death of Sylvia Likens, at the hands of many, and the plaster-cast of Paula Pace, née  Baniszewski, placed on the hand she'd broken in the daily ritual of beating her rival.

• Is there really an audience for Brooks' pensées ? How long would it take you to drop his course once he started lecturing? (My personal record was 15 minutes, the time spent by a macroeconomics professor to describe in practiced and apocalyptic terms the horrible, crushing workload he was going to inflict on the class, and anyone who didn't like it "should leave now." So I did. I thought it might make him feel a little better about himself, which he obviously needed. Besides, I had the syllabus handout in front of me, and it was about half the reading of the average humanities course, so I suspected that the shit he was full of was half the result of Biz School students' work habits, and half that he didn't know what he was talking about. And I wasn't having either.)


First, let me describe what moderation is not. It is not just finding the midpoint between two opposing poles and opportunistically planting yourself there. Only people who know nothing about moderation think it means that.

Moderates start with a political vision, but they get it from history books, not philosophy books. That is, a moderate isn't ultimately committed to an abstract idea. Instead, she has a deep reverence for the way people live in her country and the animating principle behind that way of life. In America, moderates revere the fact that we are a nation of immigrants dedicated to the American dream -- committed to the idea that each person should be able to work hard and rise.

Yeah, she.  Leave us note, here that a) no one with any sense thinks self-described political moderates in this country are anything other than Rockefeller Republicans. The position is "historical" in the sense of "long dead", but it's not an historical movement, and it sure ain't a movement based on History. The American Dream is just another Fifties-era fantasy Reagantots like Brooks were sold in infancy, and now they're trying to unload while there's still some value left.

Not to mention that a lot of immigrants didn't come to this country willingly, didn't have an opportunity to accumulate possessions, or look at white women. And we'll quit mentioning this when guys like Brooks show the slightest sign of understanding it.

• God help me, I had to read this Weigel codswallop twice, because the first time I thought it was whomever wrote the headline ("Finally, a Winning Benghazi Argument") deserved killin', and that's not the sort of mistake you wanna make.


Republicans spent a month arguing that Barack Obama had lied about the circumstances at the Benghazi consulate on September 11. That was a heavy carry, because it wasn't really true -- Obama had referred multiple times to "acts of terror." But the new criticism of the Obama response dials the clock back to the day of the attack, and it's compelling. Charles Woods, the father of Benghazi victim Tyrone Woods, has been calling up conservative talk radio to explain how his sun rushed into the fray and was denied back-up.


Let's say this again, Reader: suppose you were trying to make a decision about something you planned to keep for a couple of years: car, exterior paint, a spouse. Wouldn't "it wasn't really true" be the end of your deliberations? In fact, if you were being objective, or honest, god help you, wouldn't you just say "wasn't true", not "really wasn't true"?

What's the difference between Brooks and Weigel? Neither can keep their Republican peckers in their pants when there's an election, or a Big Issue nearby. (Unless a loss is a forgone conclusion, when they become sudden bipartisans). Their "moderation" is of the Springsteen Poster or No Real Objection to Gay Marriage type; that is, it's a personal affability, not a political stance. The most you ever hear from them is the sound of a sad head-shake when John "Missing In Action" Boehner is forced to say something really kooky. And, professionally, this allows them to a) pretend they're not Republicans and b) pretend that they are Republicans, but it's possible to be a Republican in the current century and not be sullied by the base. At one and the same time.

Brooks needs a clever moniker for his heroes. How about Momos, for Moderate Morons?

I must vehemently disagree with you on one item, though. Brooks may be a pneumatic blowhard, but I don't think he'd have the wind or chops to be even 3rd-chair trombone. He strikes me more as a one-term marching band clarinet bearer, who moved his fingers and puffed out his cheeks but never made a sound.

Looking at that photo actually caused me physical pain. If she/it peeled off the face to display a slavering lizard-head it would be an improvement.

Brooks...Brooks... what can be be said about him that Doghouse or Driftglass haven't already said? He's a lickspittle who really LOVES his job?

Both Sides Do It said...

Oh Christ now I'm picturing Brooks in a Bane mask. And the stupid jokes that follow, there are too many, I cannot stop them all.

"Yes, austerity will be extremely painful. For you."

"You argue like a young man, as if logic and ideas mattered. Admirable, but mistaken."

"No one cared who I was until I put on the mask of centrism."

Charles Woods, the father of Benghazi victim Tyrone Woods, has been calling up conservative talk radio to explain how his sun rushed into the fray and was denied back-up.

I understand how the Sylvia Likens murder must have effected you. I was 13 (soon to be 14) when Wayne Henley shot Dean Corll. The plywood torture-board and penises in plastic bags still has an effect on me. I drive by those addresses every week. I am blessed that those Boogermen are dead or incarcerated.

The picture of the demon will give me nightmares for a long time, it's utterly disgusting and a joke that the State of Indiana released her after all the horrible things she did to Sylvia and the brutality of her torture, everybody who handled her case from the judges to the prosecutors to the police officers to the parole board and all the neighbors should have been held negligent for allowing her to die while ignoring her cries and screams for help while doing nothing and turning their back on her and waited until it was too late,they all have blood on their hands and I hope it haunts them and stains their souls for all eternity. It makes me sick that they released the demon after 20 years when she should have gotten the death penalty and died the same way as Sylvia did, but she was considered a "model" prisoner when she wasn't a model person to Sylvia at all, people who steal candy or soda get more prison time than her but a child murderer who committed the most brutal act of torture got to walk free and die peacefully is considered perfectly fine according to our inept justice system, everybody failed Sylvia in a very big way but they won't be near her again and I hope the demon and all the incompetent lowlifes who handled her case and defended the demon rot and burn and be tortured a million times as hard in the fiery pit known as Hell with Satan as their god of torment. My heart cries for Sylvia every time I read about her and I wish someone could have saved her, I would have done that if I was around back then, I hope God and his angels protect her beautiful soul for all eternity and that no pain will get near her again, she'll always have a very special place in my heart and I'll never forget her.