SO I've got local teevee news on this morning, and suddenly there's a 1990s hipster on the screen explaining to me that "Mom" "didn't like Starbucks dark-roast coffee" so "he" "bought her some new Starbucks Blonde Roast" and "now" she loves Starbucks coffee.

If you were to sit on my couch, and for some reason think to check, you'd notice that there's nothing nearby one might hurl at the teevee screen sufficient to cause real damage. This is by design. My Poor Wife's, not mine.

Where do we begin? Starbucks is a paragon of the Après-Reagan economy, a huge, manipulative chain and creator of low-paying jobs. Unless you confuse lingo with expertise there is nothing in a Starbucks operation which suggests a better, fuller, quicker, or more nuanced experience, or more intelligence than a dozen average locally-owned coffee shops could bring you in any medium-sized American city. It's a suburban, strip-mall marketing program in urban threads, disguised as a bistro. It succeeded because it found the right time to combine America's love of coffee and froufrou ice cream flavors. It succeeded because it found the capital to put a store on every corner, and because it did a good job of creating and protecting a brand. A brand that has fuck-all to do with coffee, or anything, really. Starbucks sucks.

Maybe you love it. More power to ya. If Starbucks happens to do what you like, and you don't mind overpaying for it, drastically, then at least it's convenient. And I've made but three brave excursions into one, so I'm not the last word on product.

I do, however, happen to know chicory from Kenya AA, and I'd like to take another look at that fine cross-section of American advertising sprung on me this morning. Mom doesn't like Starbucks dark roast. Because Mom isn't a hipster, though she did raise one, so he'll give her a break, and show a little kindness. As will Starbucks which, of course, wasn't at fault for the previous three decades of incinerated coffee, oh no. Burned coffee is real; all the hipsters say so. But they're big enough ($8.2 billion) to deign to throw grandma there some love.

Now, never mind, make that Nevermind, that this is a corporate global megalith assuming a virtue, either from necessity (a slowly awakening and rapidly aging client base that may've discovered the coffee at MickeyD's is at least as good), or from the smell of Mom's coin purse; they tell me that in the Advertising game falseness is sometimes encouraged. No, listen: I've got no idea how old Mom is, but, since presumably she's no older than I, I need to ask where she's been going for lighter-roasted coffee for the past three decades. In fact, unless she's actually been patronizing a real coffee shop, and was savvy enough to know the difference between roasts (yes, some geriatrics retain that ability well past their fortieth birthdays!), that Starbucks roast couldn't possibly have surprised her; until you add cinnamon, nougat, and a can of whipped cream, Starbucks coffee is precisely the coffee Mom finds elsewhere. The great expanse of commerically-available cuppa out there is dominated by coffee brewed on the percolator-era template, in which Dark and Strong substitute for Flavorful and Full-Bodied. This is merely the non-semi-alcoholic version of mass-produced American beer, which has convinced generations that fine ale needs to be consumed at roughly the temperature where carbon dioxide sublimates. It substitutes sensation for taste, and hopes you'll be too snockered by the initial assault to ask questions, or even form words.

It's far more likely you can control the output of a commercial roasting operation than you can get every hash-house waitress in the country to brew a fresh pot regularly, or get every hard-pressed local heroic entrepreneur to train people, and pay to keep materials clean. Hell, as we've noted here before, particularly in connection to that notoriously misreported lawsuit, McArnold's Home Office apparently (still) confuses brewing and serving temperatures, for whatever reason, probably Simple and Pure Evil.

I'm not unaware of the concept of "espresso". I merely point out that this is, or was, before marketing trumped everything, one end of a spectrum. Insisting that all coffee is supposed to taste like that is the equivalent of opening a wine store and selling nothing but one of those California zinfandels that's 14% alcohol and should only be drunk while wearing a HANS device.

I went online this morning to find that commercial, and instead found this. From a foodie. Ladies and gentlemen, the Defense rests: 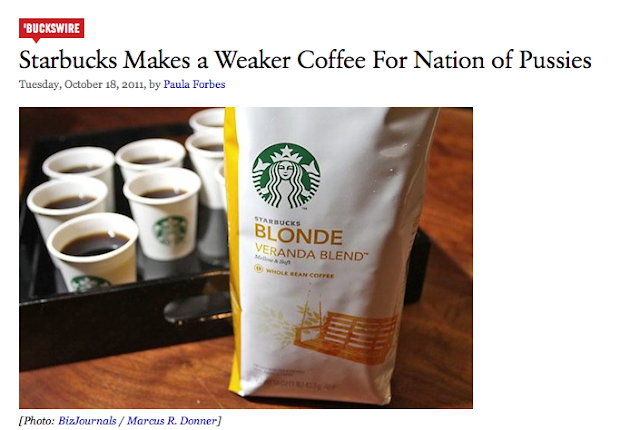 A nation which, we're informed, doesn't understand that "real" coffee tastes like the crap that Paula Forbes doesn't know any better than. Which brings us to Lance Armstrong, triathlete and former Michelob pitchman.

That Armstrong was a notorious grifter, drug cheat, and strong-arm man was so clearly understood at the time that the question isn't whether he comes clean to whatever global media hack lands the interview, or even what he might wind up saying under oath. The two questions still remaining concerning Lance Armstrong: which officials did he pay off, and how much? Lance Armstrong "admitting" he doped should be of zero interest to anyone.

Oh, and how long does Phil Liggett keep his job? Liggett is the dean of cycling journalists. Liggett stood by Armstrong long after that was tenable. That's his right. Doing so by claiming that the twenty or so witnesses who eventually came forward did so for personal enrichment was, too, but that bill has come due.

It's interesting, provided one can keep his gorge in place, to note the sort of comments that have flown around Armstrong in recent years from his die-hard fellators. The first was the passive-aggressive "Who cares about cycling?" As though Lance Armstrong became famous for riding a bike, rather than famous for beating cancer, then riding a bike. Most people in America are utterly indifferent to professional cycling; most of the rest actively despise it. Armstrong was a hotshot rider at an early age. He could have made a comfortable living in Europe. Might even have won the Tour. That he won it multiple times, in a slick, Hollywood fairy-tale fashion, isn't a tribute to his cycling prowess; it's a tribute to what the money he attracted could and did buy.

The second, more recent, has been to insist that Armstrong's victories came over a group of competitors who have basically been accused, convicted, or admitted cheating themselves, so it all comes out in the wash.*

I suppose it should flabbergast me that there are people out there who believe "Everyone connected with this enterprise deserves to do hard time" is an argument for letting everyone go, and keep his ill-gotten gains into the bargain. Except I spend too much time paying attention to American politics.

* Cf. "Ty Cobb was an ugly racist, so we must give every cheater a free pass into the Hall."

Labels: The Drugs Talking
Email ThisBlogThis!Share to TwitterShare to FacebookShare to Pinterest

I assume caffeine (preferably from real organic coffee that's decidedly not for pussies) is not a controlled substance in bike racing?

For whatever it's worth, here in Seattle, Starbucks is mostly popular with people from out of town and the suburbs. Like McDonalds, it's a good place to take a pee if you are out and about or traveling. The restrooms are always clean and if you don't look homeless, they will tell you the secret code for the bathroom door lock.

Shows how exhausted people are that they don't even have the energy to make their own coffee.

Apparently Lance is flabberghasted that he can't bully USADA into waiving his competition ban so he can compete in sanctioned triathlons. I'm glad it's for such an important human reason and not for his ego. Oops, was I just being sarcastic?

Best coffee I've ever had is Hawaiian Kona.

After that, give me Colombian.
~

My opinion of Starbucks is aptly summed up here: http://www.dumbentia.com/pdflib/starducks.pdf

I used to love Peet's "Arabian Mocha Sanani" coffee. (http://www.peets.com/shop/coffee_africa.asp) Peet's was bought out by Starbucks a few years ago, I am told. No idea if the coffee's any good, I quit coffee... years ago. Sigh.

"McArnold's Home Office apparently (still) confuses brewing and serving temperatures, for whatever reason, probably Simple and Pure Evil." I thought it was Bean Counter Marketing Evil -- they could claim to offer free refills but the excessive temperature let them get away without anybody actually requesting one !

My favorite line on the internet all week...I actually, no bullshit, snorted out some (not Starbucks) French roast when I read it. have to admit, it had something of a harsh nose on the way out, roofing tar notes, with a hint of creosote.

Got to give Lance credit, He defeated cancer, won 7 Tours, and probably didn't to anything different than his competition and probably everybody in the NFL did.Yet he has succeeded in getting the whole world to hate his guts. Whoever is advising him needs to offer a refund.

Are you sure you're not just imagining all this? My taste buds are as old as yours and I can barely tell salt from sugar. Also Sumatra.

I had a purported "Supertuscan" this weekend from Solano County (15.5% abv) that tasted like port!